The Mystic pillars that unveiled a great king

The Mystic pillars that unveiled a great king 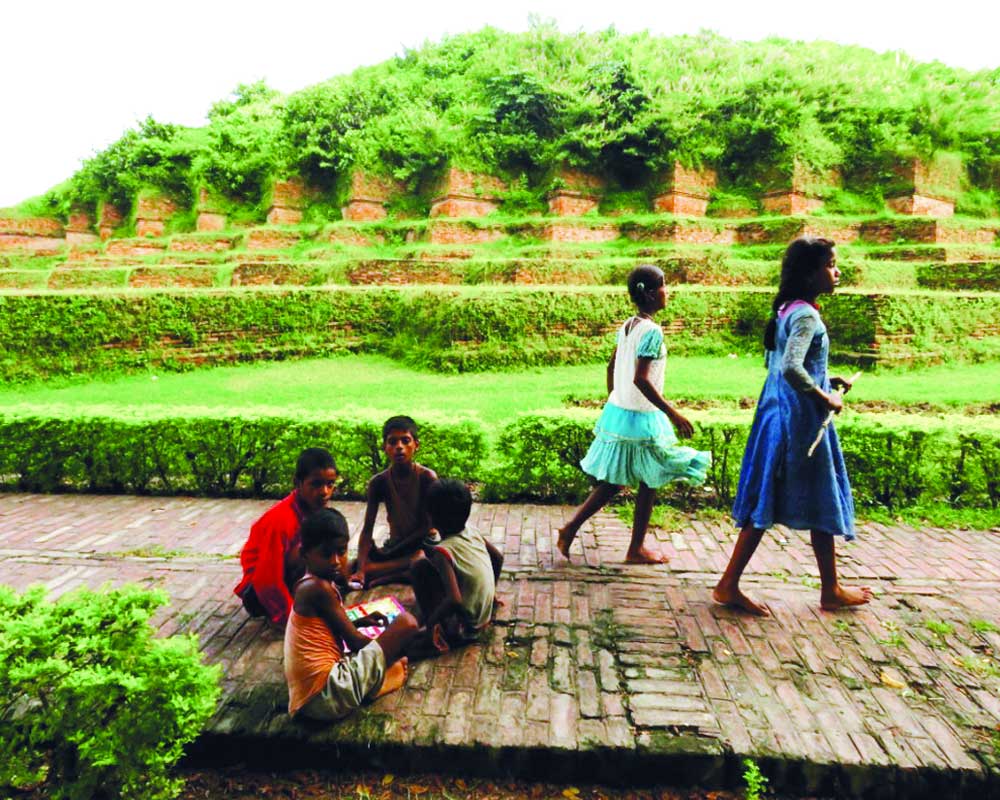 The decoding of the two Ashokan pillars with edicts near Bihar-Nepal border in the 18th century tells the tale of how India first came to know of the existence of Ashoka and his conquest through Buddhism, writes Somen Sengupta

A major unpardonable pitfall of India’s pre-islamic era was its apathy of recording political chronology in a systematic way. On top of that, non-stop destruction of its monuments, architecture, literature and centre of cultures thereafter in the hands of Islamic invaders from 12th century, a major part of Indian history was once deleted, fragmented, obscured and finally fictionalised with legend and folklore.

From 18th century onward, when European traders started exploring the country, they were astonished to see several archaeological ruins prevailing under massive dilapidation in isolated places, attracting no attention from common people.

India of that time was a country with little sense of heritage of its pre-islamic era, though the country’s civilization dates back 5000 years. This was a matter of great perplexity to Europeans who were clearly excited to find amazing archaeological relics, one after another, with mind blowing engineering marvel and excellent craftsmanship. However, none of those seemed to connect with any ready reference of written history.

For instance, in 1616, an Englishman named Thomas Coryat found an eccentric monolithic stone pillar at Delhi’s Firoz Shah Kotla. The pillar had some mystic inscription written in an unknown language. The thrill of this discovery was extended when on July 30, 1670, inside a pestilential jungle frequented by wild animals in Bihar near the Nepal border, John Marshal (not to be confused by famous John Marshal of ASI) found a similar circular sand stone pillar with mysterious edicts on its body.The pillar had a beautiful stone lion seated on an abacus crowned on its top as capital.

From the local people, John came to understand that this amazing engineering marvel was called “Bhim ka lathi” or the walking stick of Bhima, a character of Hindu epic Mahabharata. The place, where this pillar was found, was 23 km from Bettiah town. The place was then known as Mathia and today is known as Lauriya Nandangarh. Lauriya in local language means stick.

The two major victories against two Indian rulers — one in 1757 in Bengal and another in 1799 in Mysore — cemented the position on East India Company in political theatre of India. They become the ruler in almost every sense over a vast geography. This attracted many Europeans to India in the next 200 years. Many of them were ordinary office bearers and yet they proved to be extra ordinary researchers with an acute interest in India’s history. In next 100 years or so, some of them gave Indian history a new insight with their exceptional hard work and outstanding academic brilliance.

By the end of 18th century, many such mysterious stone pillars and rock stones with edict written on them in an unknown language were found from Peshawar to Mysore. European officials working in India, and having keen interest in oriental history, were excited to discover a new light of wisdom in these mystic pillars. Groping in the dark, many of them speculated these as conquests of some victorious king, or boundary pillars of dominions, or edicts of religious nature. The widest speculation was that these were secret codes of Greek treasures once owned by Alexander. However, these were soon discarded with the logic that the pillars were found in places like Delhi, Allahabad and Bihar, where Greek never could invade.

In November of 1780, Charles Wilkins sent a report to the Asiatic Society of Bengal about a finding of another mysterious decapitated pillar with similar alphabets carved on its surface at Buddal in north Bihar. This place was 28 km from Bettiah town, now known as Lauriya Araraj. This pillar, though not found with a capital, created more excitement as its edicts were more prominent and bold.

In 1783, Thomas Law, collector of Gaya district drew sketches of both the pillars and sent a report to William Jones in Calcutta. The report heading read: “A short Account of Two Pillars to the North of Patna”. In March 1814, while marching with 34th Regiment of East India Company to take part in Anglo-Nepal war, Lieutenant J Horris saw Lauriya Araraj pillar and drew some important sketches.

Now two stone pillars — one with a lion capital on top and another broken at top, found in north Bihar near Nepal border with mysterious inscriptions on them — started to rouse curiosity of the antiquarians. Such inscriptions on similar kind of pillars found in Delhi and Allahabad were already being discussed. More people started exploring the places with an objective to decode the language. It was clear that the mystery would only be unfolded once the edicts were decoded.

At the beginning of 19th century, James Prinsep, a young man came to Calcutta to join Calcutta mint. Out of sheer passion, he started serving Asiatic Society of Bengal as journal editor. The journal was a class by itself and very popular across the world. Soon Prinsep built a fantastic network with people across India who started sharing information and documents with him on every single archaeological findings. Prinsep was confident enough to think that a new chapter of history would be uncovered if the edicts written on the pillar could be decoded.

After years of hard work, in 1837, Prinsep managed to decode the script of the edict and opened the doors of knowledge to India’s glorious past that remained hidden for so long.

In 1820, Brian Hodgson, a British resident in the royal court of Kathmandu, sent a copy of the inscription on Lauriya Nandangarh pillar edict to Calcutta. This document was reported lost. Prinsep and Hodgson started frequent correspondence and soon became good friends, though it is assumed that they never met. Hodgson again sent him the copy of the inscription that he once found in Lauriya Nandangarh and in October 1834, he sent him an eye copy of Lauriya Araraj pillar edict.

Now armed with the information pertaining to all the four edicts, Prinsep managed to decode a name — “Devanamapiya Piyadasi” — that seemed to appear in all edicts. Meanwhile, a discovery of an ancient book by someone in Sri Lanka at almost the same time revealed that “Devanamapiya Piyadasi” meant — “The beloved to the God and his name was Ashoka”. Overnight, India got a colossal king whose transformation to a humanist after accepting Buddhism was known and the name Ashoka became a cult chapter of history.

Once the language was decoded, it was easy to understand that these pillars were not victory monuments, but a new and effective way of communication. Much to their astonishment, it was found that these were a public declaration of a king to come forward in acceptance of Buddhism and his transformation.

Discovery of the existence of Ashoka, the emperor, and his gargantuan contribution to spread Buddhism across the world delivered a master stroke. The language decoded by Prinsep was Prakrit, written in Bramhi script. This newly found script was named as Ashoka Bramhi. This was the first and biggest tangible evidence of Ashoka, India’s greatest king ever.

Out of these two pillars, the crown-less pillar of Lauriya Araraj, erected in 349 BC is a marvelous piece of art. Known as “Stambha Dharma”, the pillar is well polished and 37.9 feet in height. The diameter of the base is 41.8 inches and weighs nearly 34 to 40 tonnes.

The pillar at Lauriya Nandangarh is majestic and perhaps the second best specimen of Mauryan architecture with animal capital after Rampurva’s grounded pillars.

The pillar at Lauriya Nandangarh is a single block polished sandstone with an excellent lion capital built in black stone. The lion built in a seated position on a circular abacus of arched bell is covered with lotus petals.

The circular abacus of Lauriya Nandangarh lion is again decorated with image of geese. The face of the lion is broken due to vandalism. In design, it is very similar to that of the lion capital which was later found in Rampurva in 1876 by Archie Carllyle, inside the deep forest of Tarai. Rampurva lion capital is now preserved in Indian Museum of Calcutta.

The six edicts in a single block found on the pillar of Lauriya Araraj, revealed Ashoka the beloved of the God’s declaration of Buddhist teachings of morality through kindness shown to all subjects and animals. It also talks about the restriction of animal slaughter. However, in both the pillars found in Bihar, nowhere do the edicts talk about Ashoka’s conquest of Kalinga and his repent. This is very interesting to note.

The lion capital found on Ashoka pillar of Lauriya Nandangarh is one of the oldest samples of Indian stone sculptures, influenced by Persian archaeology, whereas the discovery of Ashoka Bramhi is the first tangible evidence of Buddhism that finally cemented the existence of Shakyamani Buddha as a human being and discarded the theory of him being a mythological figure as per many Hindu legends.

Two kilometres from Nandangarh Ashoka pillar, another archaeological wonder was discovered in 1862 by Alexander Cunningham — a huge mound of 15 stupas made of mud, yellow clay and brick in three levels in the shape of polygonal with three flights of stairs. The 26 metre high structure has a circumference of 460 metres and the dome is missing. It is imagined that when intact, this would be one of the biggest stupa of India built in 300 BC.

Cunningham did very little excavation and later, Henry Garrick did a great job of excavating more mounds. In 1905, T Block did further excavation and found a gold leaf, a female statue and a small deposit of burnt human bones with charcoal. These findings are common with Buddhist stupa where bone remains of Buddha are said to be found. However, till now, no solid evidence has been found that tells us who these remains belonged to. Many think that this was a pre-Mauryan structure and may be a vedic burial ground. Nani Gopal Majumdar and Amalendu Ghosh, who excavated the site from 1935 to 1939, are of an opinion that this stupa is very similar to the Buddhist stupa found at Piprahakot on UP-Nepal border.

Cut to present, it is sad to note that two hundred years ago, when this site lay undiscovered inside a dense forest with no human habitation around, a group of Europeans risked their lives to uncover the hidden treasures of India, uncovering a glorious part of our history, our present generation attaches no value to these findings.

Today, Bettiah is a dusty, over populated and unplanned town, situated very close to the Nepal border. The locals hold no pride in India’s rich history. Marks of vandalism are clear on the pillars and unrestricted entry is palpable. Bettiah now has Americanised pizza restaurants, which get over crowded every evening, whereas it’s a struggle to get the auto drivers to take you, or for that matter even seek directions, to Lauriya Nandangarh or Araraj.

It is sad indeed that we never knew our heritage back then two centuries ago, and and today, it seems we still haven’t learnt the lesson to protect it.