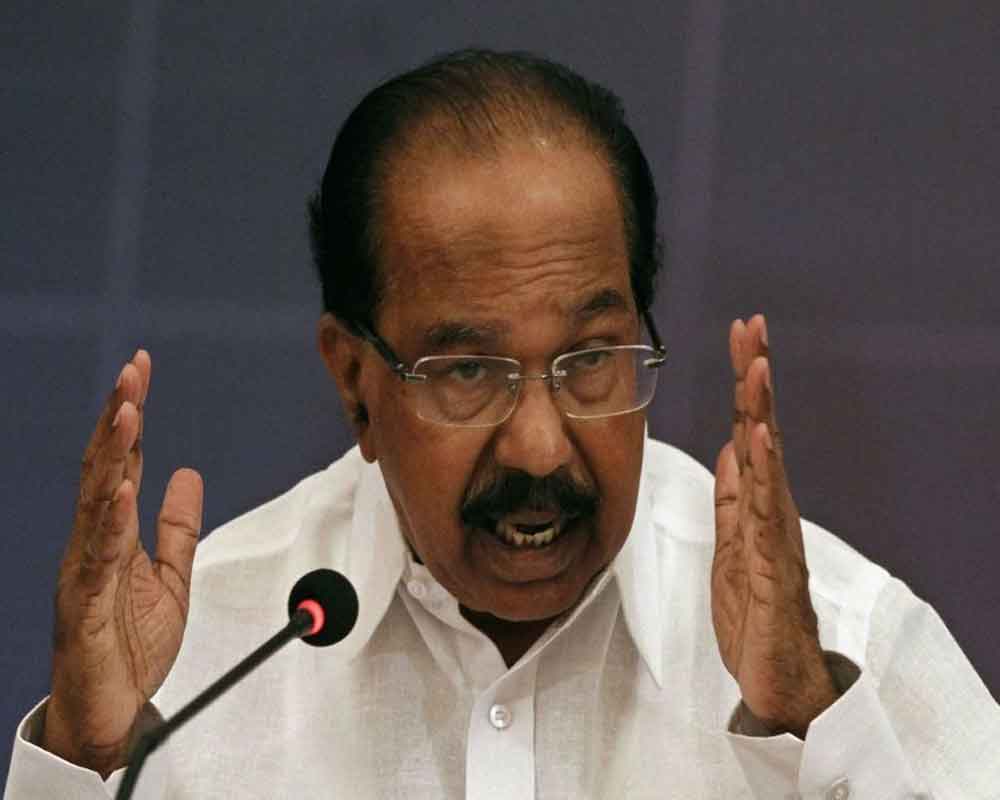 Asserting that the Congress needs a "major surgery" in the wake of the Lok Sabha polls debacle, senior leader M Veerappa Moily says Rahul Gandhi must carry out a complete overhaul of the party by holding elections at every level and quell internal bickering with an "iron hand".

Emphasising that Gandhi alone can lead the party, he said it is the AICC in-charges and chiefs of states, where the party has done badly, who should be held accountable and not the Congress president.

Moily asserted that Gandhi continues to be the AICC president and he has not stepped down.

"He (Gandhi) said that owning moral responsibility he will step down. (The Congress) Working Committee (CWC) has been unanimous to say that he has to continue. That holds good even today," he told PTI in an interview here.

Moily said it was not fair that Gandhi, who took over the reins of the Congress in 2017, quits as president after being at the helm only for about one and a half years and asserted that he must be given a substantial time to prove himself.

Moily asserted that with elections in states such as Jharkhand, Maharashtra, and Haryana coming up, Gandhi has to immediately step in.

"This is not the time to deliberate on who should be the next president. He has to put proper people in-charge of states in the AICC, start the process right now, without any loss of time. Proper candidates for elections will have to be selected... One has to take the reins in his hands and that should be done only by Rahul Gandhi now," the former Union minister said.

Appealing to Gandhi to remain in the saddle and bring about dynamic changes, Moily said the idea is that "we have to have a major surgery over the party".

"Elections at every level (must be carried out) so that we can demonstrate to the world and the country that we have fresh blood. Getting in fresh blood is important, that has been clogged somewhere in the party organisation. This is what Rahul Gandhi has to do and he alone can do it," Moily said.

Only then, there will be a rejuvenation of the party, otherwise leaders who hold onto the party like a fiefdom will continue to do so, the former Karnataka chief minister, who lost the Lok Sabha polls from Chikballapur, said.

Gandhi should quell the bickering in the party with an "iron hand without any mercy", Moily said, adding that then the people will think he is a dynamic leader.

"He has to inject that kind of discipline in the party. The party has to be overhauled everywhere which includes at the AICC-level. We need to relook at all these things. Systems will have to be put in place," the 79-year-old leader said.

His remarks come amid rumblings within party's units in states such as Rajasthan, Punjab and Telangana growing louder over its massive defeat.

On Gandhi's offer to resign at the CWC meeting on May 25, Moily said his gesture of owning the responsibility and making himself accountable as a leader for the defeat should be appreciated, but that doesn't mean that he can be dispensed with.

"Just because he owned moral responsibility, it does not mean that his leadership is not relevant. His leadership is still relevant. This is an opportunity for him. The BJP lost (in 2004) and was out of power for 10 years, but that did not mean that they wound up. They survived and came back in 2014. Ten years time is no time," he said.

Moily said the people who are in-charge of the states where the party was defeated emphatically should own the moral responsibility.

"I think other leaders should take moral responsibility, not Rahul Gandhi," he said.

Moily also said Priyanka Gandhi Vadra who entered politics a few months ago needs to be given time to expand the party in Uttar Pradesh and emphasised that she herself had set the target for 2022 assembly polls.

Once UP comes back to the Congress, the party will come back at the national level, he said.

Moily also said Rahul Gandhi has given an excellent leadership and made the Congress relevant.

"He (Gandhi) also made other opposition parties consolidate around him. Even (Prime Minister Narendra) Modi became very desperate because of his leadership, because of the Congress party. He (Modi) also thought he was losing and therefore he made all sorts of desperate attempts. You could see it in his body language, in his speeches," Moily claimed.

Rahul Gandhi demonstrated to the world and the country that he is more than a match to Modi, Moily said. "Congress should have taken advantage of that in which we failed," he said.

Moily also expressed confidence that the Congress can play the role of a dynamic opposition despite low numbers in the Lok Sabha.

"Numbers are not important. The passion with which we take up the cause of the party is important," he said.

On Swaraj India leader Yogendra Yadav's remarks that the "Congress must die", the veteran Congressman said: "Who is he to suggest others. The Congress has 135 years of history. Britishers wanted to write its obituary, but they wrote their own obituary and went back."

He cited various instances when the Congress has bounced back from massive defeats to assert that a comeback by the grand old party is in the offing.

"People who forget history want to talk like that. Nobody can write the obituary of the Congress. It has sustenance power and it will come back," he asserted.