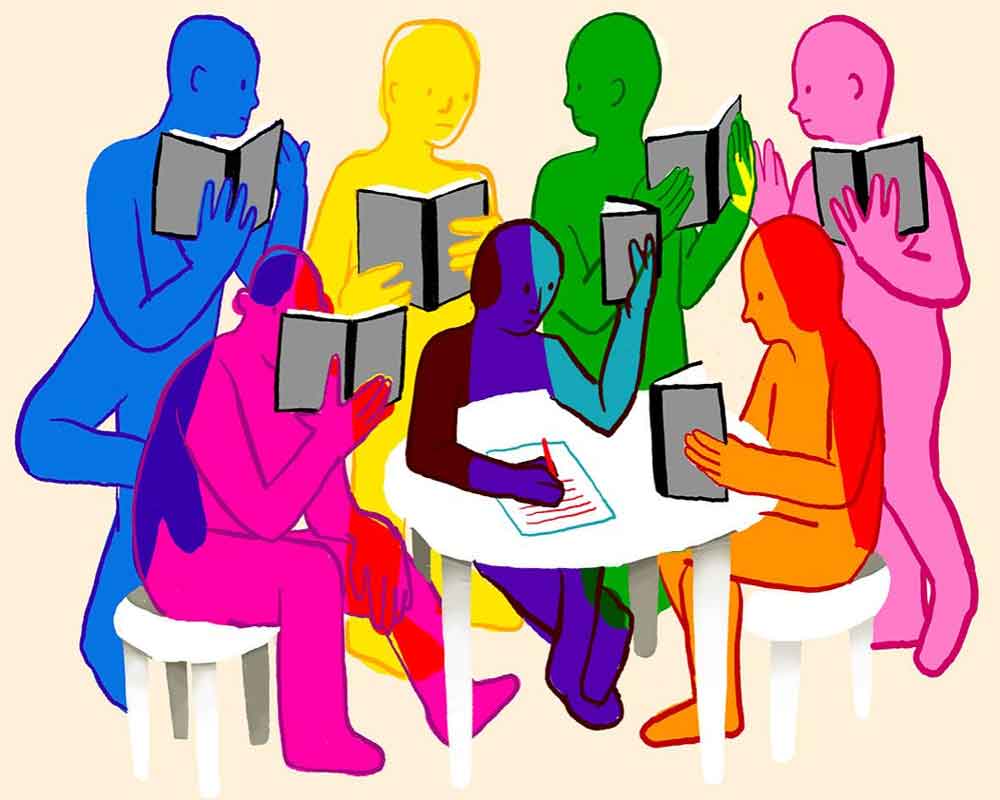 For homosexuality to be accepted by society at large, Rainbow Lit Fest rightly promotes queer literature to be part of mainstream education, says Ayushi Sharma

We may be homophobic as a society today but ancient literature is replete with characters which were gender fluid or could not be confined within the two strict definitions of male and female. All one needs to do is click the rewind button to see that Indian literature and fiction have always had a mention of drag and queerness in subtle forms. For instance, in mythology, Mohini can be seen as the drag avatar of Vishnu. Many of Indian mythology scholar Devdutt Pattanaik’s collection such as The Pregnant King, The Man Who Was a Woman and Other Queer Tales from Hindu Lore and Shikhandi and Other Tales They Don’t Tell You refer to such characters. In the same vein, writer Ruth Vanita, who studied in India all her life without hearing any reference to the queer world, wondered about the same and did some research. The result is Same-Sex Love in India with Saleem Kidwai, that collects LGBTQ+ stories from the Mahabharata to Kama Sutra, up to the 20th century. Then there is Lihaaf, a short story by Ismat Chughtai, written in 1942 which still continues to be one of the most significant works of lesbian fiction to emerge out of Indian literature that documents the relationship between an unhappily married begum and her female companion in 19th century Lucknow.

Many of these references may not be overt but there has always been an implicit mention of queerness which reflects the society we live in, “where everyone knows about the queer community but does not want talk or write about it,” feels Ayushman Aishwarya, Human Rights lawyer, who performs as his drag avatar, Lush Monsoon.

However, the winds of change are blowing through the society ushering in a liberal change after the decriminalisation of Section 377. The representation of the LGBTQ+ community is now gradually becoming mainstream and Rainbow Literature Festival (RLF), a crowdfunded initiative, which was held over the weekend is one such example which goes beyond binaries and brings different identities and sections of society under one roof.

The festival director RLF, Sharif D Rangnekar tells us that the verdict on Section 377 that decriminalised homosexuality has opened space for expression which is no longer limited to literature. “The fact that we had 80 speakers from the queer community and over 30 plus artists of different backgrounds, suggests that we are already on a path of inclusiveness,” says he.

However, to ensure that the inclusivity extends to the society, one needs to start at the very beginning — in schools. It needs to be included in school syllabus and textbooks. Moreover children should be sensitised on this issue in a way that it reaches them through a multi-sensory experience. Writer, model, actor and a TEDx speaker, Anwesh Sahoo, feels that by making it a part of NCERTs, it can be brought into the popular perception very subtly. “There’s nothing unusual about the story of a kid who happens to have two mothers being narrated in schools. Powerful resilient stories of trans men and women being shared via literature could be incredibly inspiring for young minds. It’s a possibility but the authorities have to be willing to read these stories and share them widely through books,” says Anwesh, who was also crowned Mr Gay World India 2016.

For Ayushman, gender and sexuality sensitisation is as important as teaching biology. He feels that schools are leaving children in the dark if they do not let them know about different sexual orientations. “Issues related to the LGBTQ+ community should not be considered ‘adult’. It is very easy to include this in textbooks, if only we have the willingness to do so,” says he, who has hosted the Drag Queen Story Hour for children and has also been involved in gender and sexuality sensitisation and training. Growing up, he had no queer role models to look up to. Of course, such a move would also help youngsters who do not fit into the description of heterosexuals to come to terms with their sexuality easily and find acceptance among their peers.

Ayushman feels that there is a lack of queer representation in media, including in children’s media. “If younger people see more queer people around them and in films, TV shows, they will automatically be more sensitised,” says the Human Rights lawyer.

Contemporary literature has few examples of gender variance, such as The Boyfriend (2003) by R Raj Rao and Mitrachi Goshta: A Friend’s Story (1981) by Vijay Tendulkar. However, theatre actor and director, Vivek Mansukhani, believes that there could be more such storytelling that can help raise awareness, tolerance and compassion. He says, “Apart from reading books on literature, role plays, drama, viewing suitable short films, attending workshops that focus on respecting diversity and inclusion are critical. Teachers and parents need to be simultaneously sensitised.”

Dr Jijo Kuriakose, founder member of Queerala, urges leaders to sensibly include Sexual Orientation and Gender Identity (SOGI) as part of human rights education rather than just sex education. “No matter how challenging it would be, it is highly important considering the current societal setup,” says he, who is also a writer and documentary filmmaker. He has been focussing on various discourses on sexual orientation across cultural and political spaces while successfully organising projects like Wiki Loves Pride (LGBTQ+ edit-a-thon at Kochi) and Homomorphism (a queer art exhibition).

For journalist and writer Sandeep Roy, such an event is an opportunity for the queer literature to finally become part of the mainstream, especially since Section 377 was abolished. But he also warns against pigeonholing writers and artists as “queer writers”. “Usually, when writers or professionals who are queer are invited to panel discussions quoted in media reports, they are only asked to talk about the queer community and the queer experience,” he says.

It is high time that people should not to underestimate the power of representation in literature. It could save the lives of children, who believe that there is something fundamentally wrong with them. Let literature tell them that it is not.