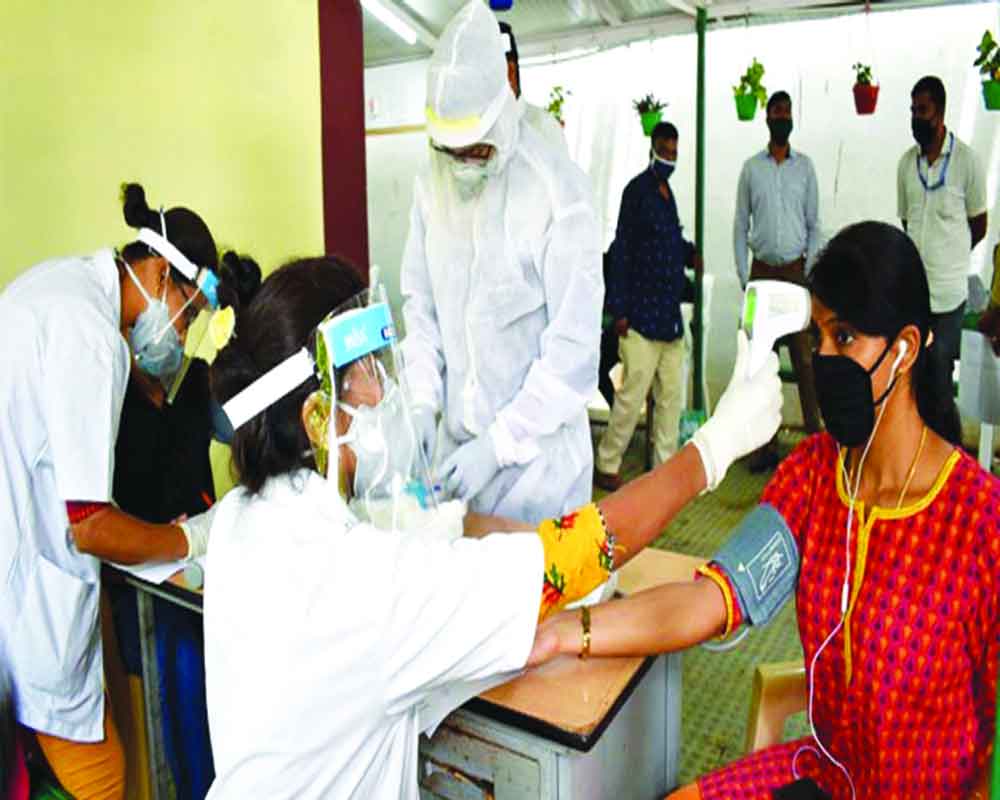 COVID is a peculiar contagion; doctors must admit they don’t understand it. What is needed is not costly vaccine but a new hydroxychloroquine-type of tablet. Ayurveda needs space too

The grim impact of the Coronavirus pandemic, lockdown and cyclones Amphan and Nisarg that lashed both coasts have cast a shadow over the first year of Prime Minister Narendra Modi’s second term. Still, it was an eventful year, beginning with the defanging of Article 370, scrapping of Article 35(A) and the bifurcation of the State of Jammu & Kashmir into two Union Territories viz, Jammu & Kashmir and Ladakh. Coupled with the Citizenship Amendment Act (CAA), this ended the nationality crisis of thousands of Hindus who had fled East and West Pakistan during and after Partition and gave justice to others who were denied rights despite living in the State for decades.

Islamabad protested the changed status quo in Jammu & Kashmir, though the international community largely accepted the change. The current face-off with China in Ladakh is more complicated: Is it an attempt to stave off a challenge to President Xi Jinping whose stewardship of the Belt and Road Initiative (BRI) has caused dangerous distortions in China’s economy, aggravated by Coronavirus, rendering millions of Chinese jobless? Though most Western industries have not exited China, there is a steep decline in demand for goods. One will have to see how events unfold in the mainland.

Within India, the virus has caused immense suffering. As it was alien and medical opinion confused, lockdown seemed a sensible precaution. But the virus defied three successive lockdowns and the summer heat that was supposed to kill it, and spread gleefully with every relaxation of lockdown, beginning with the opening of liquor shops in cities. Despite assertions that the virus is only a flu (that causes common cold), it is lethal enough to kill even in the sixth month of its arrival in India.

What began as an “elite” disease in most world capitals has become pervasive and the mode of transmission remains unclear. There was no Coronavirus in the urban clusters where migrant labour lived at the beginning of the lockdown. The Delhi-based labour that rushed to Anand Vihar bus terminal on March 28 did not have a single case of Coronavirus. The labour class in cities grew restive with no security of job or salary under extended lockdowns; the Prime Minister’s appeal to employers not to sack employees failed in the absence of financial support. Perhaps those who paid salaries could have been offered 100 per cent tax rebate during the lockdown period; loss to the exchequer would be miniscule.

By May, restive labourers demanded to return to their villages as they could not pay the rent. The Railway Ministry messed up by not running free trains. Asking State Governments to pay 15 per cent of the fare was graceless and logistically unsound; the Supreme Court noted the lack of food and water in the trains. Some trains going east ended up in south India; no heads have rolled till date. The airlines were problematic. Over 600 planes were cancelled on the first day on grounds that States refused to accept the flights. But there was no intimation to the passengers who were sent back from the Delhi airport after travelling from other States; no apology either.

The surge in Coronavirus cases began in the past few weeks when the lockdown eased and travel was allowed. How did people get infected during the lockdown and allegedly take the infection to their villages? This is a very peculiar contagion; doctors must admit they do not fully understand it. Perhaps what we need is not a costly vaccine (holy grail of big pharma) but a new hydroxychloroquine-type of tablet. Ayurveda needs space in the COVID war.

Meanwhile, there is disquiet in Jammu province that domination by Kashmir province may continue in the new Union Territory if delimitation of constituencies is based on Census 2011, rather than Census 2021, which has been notified. Former Director Planning, J&K Government, HC Katoch, argues that the first Census was conducted in 1941; second in 1961.  He has questioned the integrity of the 1961 figures.

In 1941, the population of Kashmir was 46.34 per cent (17.29 lakh) and Jammu 53.66 per cent (20.01 lakh). The area of Jammu & Kashmir was 2.22 lakh sq km, of which Pakistan gave China 54 per cent illegally (27 per cent of Kashmir and 18 per cent of Jammu). Thus, Kashmir lost a larger share of the population than Jammu. Katoch argues that it was widely believed that Census 1961 was manipulated to show higher population for Kashmir, a practice continued by the Kashmir-dominated bureaucracy in Census 1981 (none in 1971 due to war; none in 1991 due to unrest) and 2011. Effectively, Census 1961 was the base for all Census operations. In 1991, Kashmiri Hindus fled and the Jammu population increased in almost equal numbers.

Katoch argues between 1981 and 1991, population growth in absolute figures was higher in Jammu, while in 1991-2001, population of Srinagar started touching Jammu figures. This shows that population in Srinagar was shown comparatively higher even after the exodus of over three lakh Hindus.

However, besides the exodus, Kashmir’s population growth rate should have been affected by militancy-related deaths of marriageable age population. Instead, there is a growth spurt in most militancy affected districts of Kupwara, Baramulla and Srinagar. For instance, Kupwara population rose from 26.34 per cent to 27.51 per cent between 1961 and1991 and jumped to 38.59 per cent in 1991-2001. Yet in the Jammu region, the population growth fell. Unless rectified, this will deprive Jammu of its legitimate share of seats vis-à-vis Kashmir.

Another issue pertains to the new rules for recruitment of Class-IV employees. While the provision that any person can apply in any district of Jammu & Kashmir seems fair, Jammuites fear that this could trigger a demographic invasion of Jammu by “waves of Kashmiri settlements.” Given the province’s long fight against “land jihad” by illegal settlers in forest lands, Jammuites favour the old recruitment system under which Class-IV district and divisional level vacancies were made from among candidates from the respective districts or divisions. They point out that while Kashmiris can get jobs, buy or rent property, settle and live peacefully in any district of Jammu, candidates from Jammu lack similar freedom. Hence, Jammu jobs should be reserved for Jammu only. These are valid anxieties. Prime Minister Modi and Home Minister Amit Shah invested much political capital on the full integration of Jammu & Kashmir with the rest of India; they should not allow it to be frittered away.