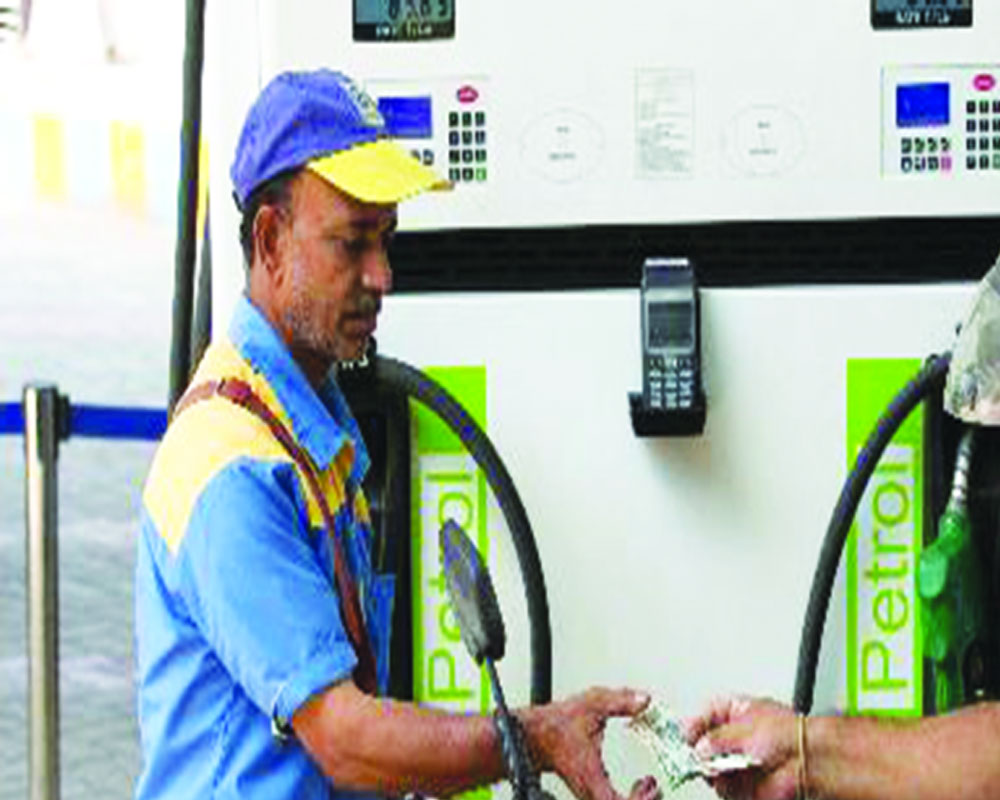 We have an abhorrent situation whereby taxes alone account for about two-third of the price at the pump. The high fuel price contributes to high inflation and higher costs of fertilisers and food

The prices of these fuels are deregulated (petrol since June 2010 and diesel since October 2014). Under the subsisting arrangement, oil marketing PSUs calculate their prices at the pump by adding four components, viz. the ex-refinery price (ERP), freight charges, dealer commission and taxes. The ERP in turn is linked to the import parity price (IMPP) and export parity price (EPP) of respective fuels in the ratio of 80:20. The price is fixed on a daily basis taking into account the variation in IMPP/EPP. Changes in the other components, if any, are also reflected as and when these happen.

The IMPP/EPP or international prices (as understood in common parlance) of these products move in tandem with the movement in international prices of crude oil — the basic raw material that is processed in refineries to get a variety of petroleum products (POL), including petrol and diesel. The price of crude oil depends on the global supply and demand balance. If the demand exceeds supply, the price increases; in case supply exceeds demand, the price decreases.

In January, when the international price of crude was ruling at about $60 per barrel, the price of petrol (in Delhi) was Rs 76 per litre and that of diesel Rs 68. In February/March when the Covid-19 crisis was building up, leading to a contraction in global demand, the OPEC (Organisation of Petroleum Exporting Countries) and non-OPEC suppliers wanted to clinch a deal to reduce supplies but failed. As a result, the crude price plunged to around $30 per barrel in March. In that month, even as the price of petrol was down to about Rs 70 per litre, diesel continued to hover around the same level as it was in January.

By April the devastation caused by the contagion reached its zenith. This resulted in destruction of global oil demand by an unprecedented 29 million barrels per day (mbpd). This time around, the OPEC and others reached an agreement to cut supplies by 10 mbpd. However, the agreed cut being far short of the contraction in demand, the deal failed to stem the slide in crude prices which plummeted to a low of $17 per barrel. Despite this, the price of petrol and diesel more or less remained unchanged at Rs 71 per litre and Rs 69 respectively.

During May/June, with calibrated unlocking in different parts of the world and easing of excess supply, the crude price firmed up to about $30 per barrel in May and further up to a little above $40 per barrel in June. Correspondingly, the retail price of petrol and diesel has escalated to about Rs 80.5 per litre each. The above trends point towards brazen violation of the underlying principle of pricing. Despite the price of crude in April being nearly one-fourth of its level in January, the consumers in Delhi were paying for diesel at the same rate whereas, for petrol they paid marginally less by Rs 5 per litre. By June, when crude increased to $40 per barrel (which is two-third of the January level), they are paying more than Rs 80 per litre for both — significantly higher than January level.  The blame lies squarely with the Centre and States, which raised taxes when the international prices were moving south (up to April) but did not lower them when the prices reversed the trajectory (May/June). On March 14, the Central Government increased Central Excise Duty (CED) on petrol and diesel by Rs 3 per litre each. In May it resorted to another hike in CED, this being much steeper at Rs 10 per litre on petrol and Rs 13 per litre on diesel. In a short span of less than a month, it has increased duty on petrol by Rs 13 per litre and on diesel by a whopping Rs 16. The States, too, increased Value Added Tax (VAT) substantially; e.g. Delhi by as much as Rs 7 per litre.

Faced with a steep decline in tax revenue during the current year (this could be as high as Rs 4,00,000 crore) and ballooning expenditure commitments, including health as well as livelihood- related and given the compulsions of avoiding a major slippage in fiscal deficit, the Centre saw a golden opportunity to raise extra resources by hiking the CED. This could pass muster as long as it didn’t result in higher price to consumers. But, this wouldn’t be acceptable if it starts pricking them. And this is precisely what happened in June. The Government could have rolled back a portion of the hike in CED when crude prices firmed up in May/June. But that was not done leading to a steep increase in prices at the pump.

Under the scheme of sharing Central taxes with States as per the recommendation of the Finance Commission, the Central Government is required to transfer 42 per cent of its collection to them. However, the Road and Infrastructure Cess (RaIC) — a part of CED — is kept out of the divisible pool. In other words, the former can keep the whole of RaIC with itself. No wonder, out of the steep increase in CED at Rs 10 per litre on petrol and Rs 13 on diesel in May, the Centre collected Rs 8 per litre each in the form of RaIC. Out of the current CED on petrol at Rs 33 per litre, Rs 18 per litre comes from the cess whereas, for diesel, out of Rs 32 per litre CED, RaIC is Rs 12 per litre.

It is abundantly clear that irrespective of the international price scenario (whether low or high), the Narendra Modi Government appears to have taken a conscious policy decision to keep the CED high and that, too, mostly in the form of RaIC, which enables it to retain an overwhelming portion of the collection with itself. Not to be left behind, the States also extract their pound of flesh.

We thus have an abhorrent situation whereby taxes alone account for about two-third of the price at the pump. The high fuel price contributes to high inflation and higher cost of fertilisers and food. Since the Government controls their prices at a low level to make them affordable to users, a good slice of extra revenue is given back as higher subsidy. To that extent, the revenue gain from higher CED is imaginary. The cost of fuel is a major component of operational cost of any firm including micro, small and medium enterprises (MSMEs). It is ironic that on one hand, the Government is making all out efforts (moratorium on loan repayment, additional working capital, lower interest rate  and so on) to ensure that they come out of the crisis.  On the other, it increases their cost of operations (courtesy, steep hike in CED).

The high taxes are also a major bottleneck in the way of removing the current tag of “zero rating” under the Goods and Services Tax (GST) which is a jargon to continue petrol, diesel (besides natural gas, crude and aviation turbine fuel or ATF) under the erstwhile regime of CED, VAT and other local taxes. Even if these fuels were to be put under the highest tax slab, the applicable rate will be 28 per cent. Against this, the current incidence of tax under CED/VAT being more than double the cost of supply, the Centre and States will shudder at the very idea of including these products under the GST dispensation.

The Government must not become too dependent on oil taxes for increasing its revenue and maintaining the fiscal balance. With 2020-21 being an excruciating year, it may continue with current CED for now, but from next year, the hikes affected in March/May should be rolled back. Thereafter, it should gradually reduce it to reasonable rates preferably to a level less than Rs 10 per litre (in 2014, CED was Rs 9.8 per litre on petrol and Rs 3.8 per litre on diesel).