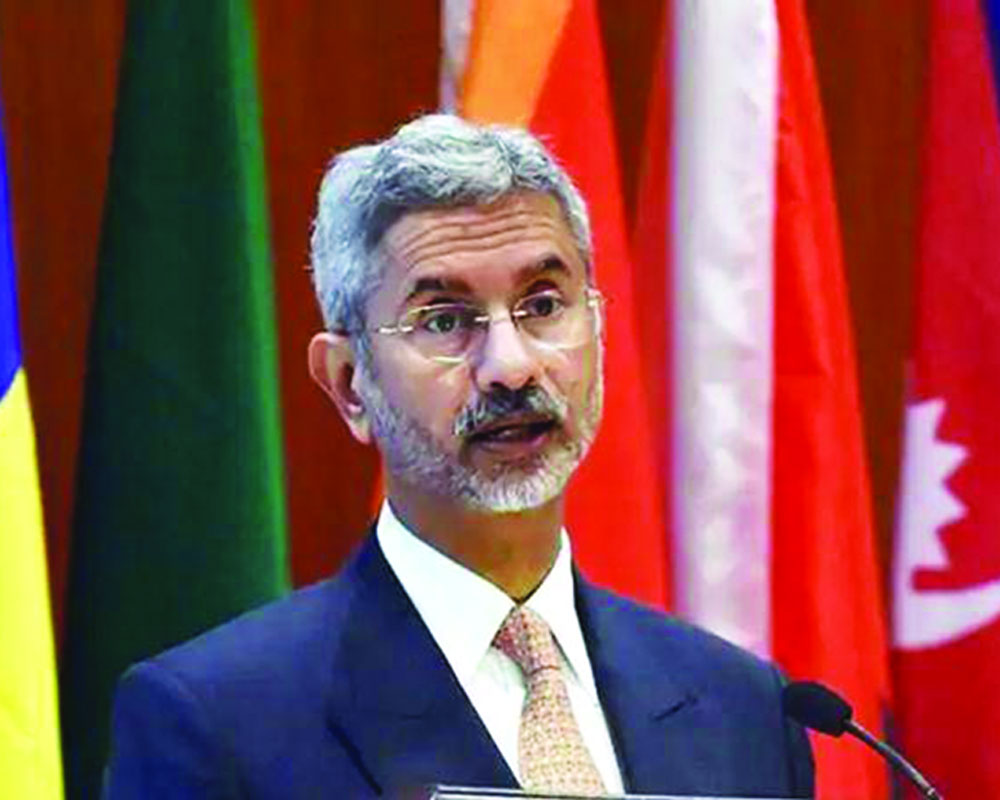 The Minister’s understanding is sharp and realistic. He is convinced that since diplomacy worked to get China to withdraw from Doklam, it can work again

Even as China accused Indian troops of intimidatory firing on Monday, Foreign Minister S Jaishankar will meet his Chinese counterpart Wang Yi face to face in Moscow for the first time after the standoff. The meeting will take place on the sidelines of the Shanghai Cooperation Organisation (SCO) foreign ministers’ conclave, hot on the heels of Defence Minister Rajnath Singh’s conversation with his counterpart, Gen Wei Fenghe, at the same platform. Pessimism surrounds the outcome of the Wang-Jaishankar meeting though Jaishankar has been signalling to Chinese leaders the big picture of India-China relations and India’s terms for a reset. His emphasis on the need for India to be more proactive and take risks are reflected in some recent Indian military, diplomatic and economic activities that connote capabilities and confidence.  Diplomacy is the path India has chosen to secure its objective of restoration of status quo ante. Jaishankar, who says he knows Wang for a long time, acknowledges the situation on the LAC is very serious and requires “deep conversations” at the political level.

India launched a blitzkrieg of events along the LAC prior to Singh meeting his counterpart. CDS Gen Rawat was exceptionally vocal over the military option, including a two-front war if diplomacy failed and the utility of Quad. COAS Gen Naravane, on his third visit to Ladakh, was in Chushul at the scene of recent action. Chief of Air Staff, Air Chief Marshal Bhaduria, inspected air bases in the east and Foreign Secretary Harsh Shringla, in his first public address, highlighted the Galwan clash resulting in casualties for the first time in 42 years of peace and tranquility on the border. Indian forces carried out their first proactive military operation on their own side of LAC on the south bank of Pangong Lake by occupying heights that gave them domination in the Chushul area. A battalion of Vikas regiment, comprising exiled Tibetans, was employed in the pre-emptive operation, messaging to China the dormant Tibet issue. A company commander of this special force was killed due to an old mine and his funeral was attended by Ram Madhav, general secretary of the BJP. About the proactive operation, there is confusion over location and control of contested heights at Helmet and Black Top. The Army just said it occupied ground to improve its defences.

After the meeting of Defence Ministers on expected lines, China accused India of crossing LAC at Chushul and demanded Indian troops be withdrawn. India blamed China for multiple intrusions and urged the restoration of status quo ante. But both sides stressed the determination to continue talks. Central to China’s complaint is Indian violation of Chinese LAC at Galwan and Chushul without admitting it is the original sinner of multiple intrusions by violating border protocols and unilaterally altering status quo. Stung by the banning of 117 more apps (now aggregate of 224 banned apps), for the first time China accused India of colluding with the US against Chinese companies. It formally charged US with meddling in the border dispute.

While US officials have been accusing China of bullying India, President Donald Trump himself has been non-committal by calling the standoff  “very nasty” and wanting to do something to help both countries. He did not think that China was bullying India though he noted that China was certainly “going for it.” After the partisanship Prime Minister Narendra Modi displayed in endorsing Trump at Houston (and Ahmedabad) for the next President, a video of which is the Trump vote-catcher among Indian Americans, Trump’s clean chit to China is problematic.

The use of Tibetan troops in operations, when high altitude Ladakh Scouts regiments are available, is by design India’s belated psy war. It has the potential to reignite India’s Tibet policy, which in 1950 ignored China’s illegal occupation of Tibet.  India’s much-touted abandonment of the One China policy has nothing to do with Tibet but more with Taiwan and Hong Kong. Chinese Foreign Ministry spokeswoman Hua Chunying said: “We firmly oppose any country providing convenience for the Tibetan secessionist forces’ separatist activities.” The Global Times accused India of playing the Tibet card and noted that China’s national strength, including its military strength, is much stronger than India’s and that when it comes to ultimate combat capability, the Indian side will lose. Eighteen weeks after the initial intrusions, the Indian Army carried out its maiden proactive operation at Chushul heights and unnerved the PLA. Dominating ground in other sectors should have been taken up much earlier.  Many officers are demanding that the military option be utilised to impose costs on China now that the force build-up is being completed. Three additional divisions, tanks and artillery are amassed along LAC with reserves in depth. China has made matching deployment, including locating its J20 frontline fighter, at Hotan. IAF is ideally suited for deterrence by punishment in case military force is used to evict intrusions.

The one intrusion that PLA covets most is Depsang which was not covered by the failed “disengagement” dialogue. In September 2013, it had occupied the same area and withdrew after talks and India’s counter-intrusion at Chumar. The PLA at Depsang poses a direct challenge to the strategic Daulat Beg Oldie military garrison and air base, which it views  as a threat  to G 219, the Aksai Chin highway to Lhasa. While a counter-intrusion along the 1,590 km LAC in Ladakh will be feasible and not be escalatory like military action to push back at Depsang or any other intrusion, neither is advisable as long as the door to diplomacy is open. The military option must remain the last resort notwithstanding the  last public pronouncement of the former acting US Undersecretary of State for South Asia and Central Asia, Alice Wells : “India’s broadening strategic horizons over the past two decades have resulted in a shift away from a passive foreign policy to one that advances its interests more vigorously.”

Jaishankar had a long stint at Beijing and then as Foreign Secretary. He enjoys the full confidence of his Prime Minister. His understanding of China under President Xi Jinping and the Chinese Communist Party is sharp and realistic. He is convinced that since diplomacy worked to get China to withdraw from Depsang, Chumar and Doklam, it can work again. Given the escalatory  firing by PLA and occupation of positions close to India’s —creating a new friction point —coupled with rash statements by Global Times, the Chinese have raised the stakes for Jaishankar.