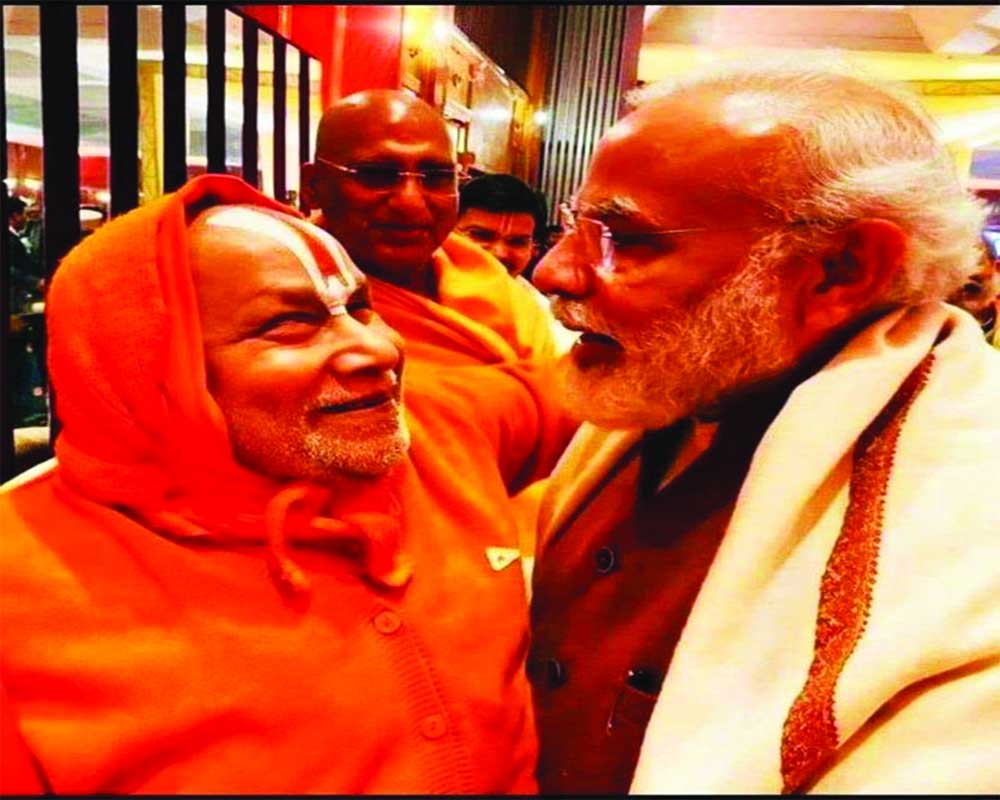 An enduring mystery of the Ram Janmabhoomi court battle is the failure of the Allahabad High Court and the Supreme Court to mention the testimony of Goswami  Tulsidas regarding the destruction of the birthplace of Sri Ram in their respective judgments. The Supreme Court’s 1,045-page verdict gathered all evidence regarding Ramlalla’s birthplace in a 116-page addendum, but overlooked the saint from Chitrakoot (Uttar Pradesh). From the time Bharatiya Janata Party (BJP) stalwart LK Advani launched the Somnath-to-Ayodhya rathyatra in September 1990, believers have agonised over the absence of “evidence” in Sri Ramcharitmanas. The erudite scrutinised Tulsi Granthavali in vain.

Cultural Marxists declaimed that when the foremost medieval devotee of Sri Ram did not mention the iconoclasm at Ayodhya, allegations of the alleged destruction of the temple were false. They refused to recognise the wealth of evidence adduced to prove the erection of a mosque over the temple’s ruins, using materials from the same temple, the hallmark of much medieval architecture.

They showed contempt for the fact that Hindus struggled desperately to reclaim this site for nearly five centuries and clung to its edges to keep memory alive so that someday its sanctity could be restored. That dawn arrived on November 9, 2019, and on August 5, 2020, a special puja was held at Ayodhya to launch the construction of a new temple on the sacred site. The presence of Prime Minister Narendra Modi, accepted gracefully by the Muslim community (barring some pro forma opposition) and most Opposition parties, drove the Comrades apoplectic. And so the chorus began: Even Tulsidas never said ….

It may legitimately be asked why Tulsidas is so crucial for the anti-temple lobby. Born in 1532, two years after the death of Babur who founded the Mughal dynasty in 1526, Tulsidas grew up in an era when the wounds of the apocalyptic events at Ayodhya were raw and fresh in Hindu memory. He was a contemporary of Akbar who ascended the throne in 1556, just 26 years after Babur’s demise, and was perfectly positioned to be the best chronicler of the spirit of his age.

Jagadguru Ramanandacharya Swami Rambhadracharya of the Ramanandi Sampradaya submitted in an affidavit before the Allahabad High Court on July 15, 2003, stating that in Shri Tulsi Dohashatak, the poet bemoaned the misdeeds of Babur and destruction of the Ram Temple by Mir Baqi. “The Yavanas (foreigners) filled with anger ridiculed the mantras, Upanishads, brahmanas and Puranas; after cutting the tuft of hair (shikha, choti) and yagopavit (sacred thread of Brahmins), they expelled the followers of Hari from their homes. Tulsi says this is a bad time for Hindus” (Bhad hari bhagaye desh se, TuIsi kathin kujog).

“Babur came with sword in hand in the summer months of Vikram Samvat 1585 (1528 AD) and created havoc (anarth). The beautiful Ram Janmabhumi temple was ruined and a mosque built; Tulsi felt aggrieved (Tulsi kinhi hai).” Further, Mir Baqi destroyed the temple and the murtis of Ram Darbar (family of infant Ram) as a broken-hearted Tulsi cried for protection (Trahi trahi Raghuraj). Tulsi continued, “Where there was a temple on Ram’s birthplace, in the middle of Awadh, Mir Baqi built a mosque.” In Kavitavali, Tulsidas laments, where are the ascetics (dhoot, avadhoot), the Rajputs and the weavers? He expresses detachment from society. Tulsi, he avers, is devoted to Ram, will eat by begging, will sleep in mosque (masit mein saibo).

This is the historical environment in which Tulsidas began composing Ramcharitmanas in 1574-75. The epic is not a mere reiteration of Valmiki Ramayana in Awadhi; the language was chosen as it was the tongue of the land where the temple once stood. Tulsidas’s annual public performances of Ramlila had a vibrancy that helped overcome the disempowerment felt at the loss of the temple. Indeed, this is why Jaina monk Lonka Shah (c. 1450) began the practice of community worship in halls rather than temples, without images that could become the target of iconoclasts. Guru Gobind Singh continued this tradition when he declared the Granth Sahib to be the “Guru” of the Khalsa Panth.

Tulsidas reminded a shattered people that Sri Ram was the ideal sovereign and human being (maryada purushottam) who defeated many powerful evil-doers, including Ravana, to restore dharma. His epic soon acquired the status of a scripture. It is pertinent that Sri Ram is the only avatar (incarnation) of Vishnu who became king; Sri Krishna was a prince.

In Ayodhya, Prime Minister Modi summed up the spirit of the text when he pointed out, “Tulsi’s Rama was with form (saguna) while Nanak and Kabir’s Rama was formless (nirguna).” Those trying to diminish the temple may remember this. The Prime Minister also said, “Buildings collapsed, every attempt was made to erase the existence …but Lord Rama is fully embedded in our hearts. Lord Rama is the foundation of our culture; he is the dignity of India. He personifies dignity.”

Tulsidas’s narrative rests on three distinct conversations: Between Shiva and Parvati, between sages Bharadwaj and Yajnavalkya and between Kakbhushundi (the sage-crow) and Garuda, king of birds (eagle). Essentially, Shiva states that Ram incarnates on earth in different epochs to protect the righteous. The epic is noteworthy for its divergence from Valmiki regarding the fate of Sita after her return to Ayodhya. While Valmiki dwells upon the queen’s exile to the forest because of loose-tongued citizens, and her final anguished appeal to the Earth to open and take her back, Tulsidas ignores this episode entirely. The reasons cannot be merely emotional as some have surmised.

Sita (literally furrow in Sanskrit) is not merely the Divine Mother whose earthly travails moved the poet. Found in a furrow in a field by King Janak, she is also a metaphor for the Earth, the Kingdom. Sri Ramcharitmanas is a subtle exhortation to the Hindus to remember their duty to rescue the Goddess from the forces ravaging the land. Tulsidas’s Sita cannot be banished because she is still in bondage. Cloaked as a devotional poem, Sri Ramcharitmanas is a powerful political-civilisational treatise. Possibly this understanding is why the learned judges of the Allahabad High Court and Supreme Court  sidestepped Tulsidas’s testimony; he cuts too close to the bone.