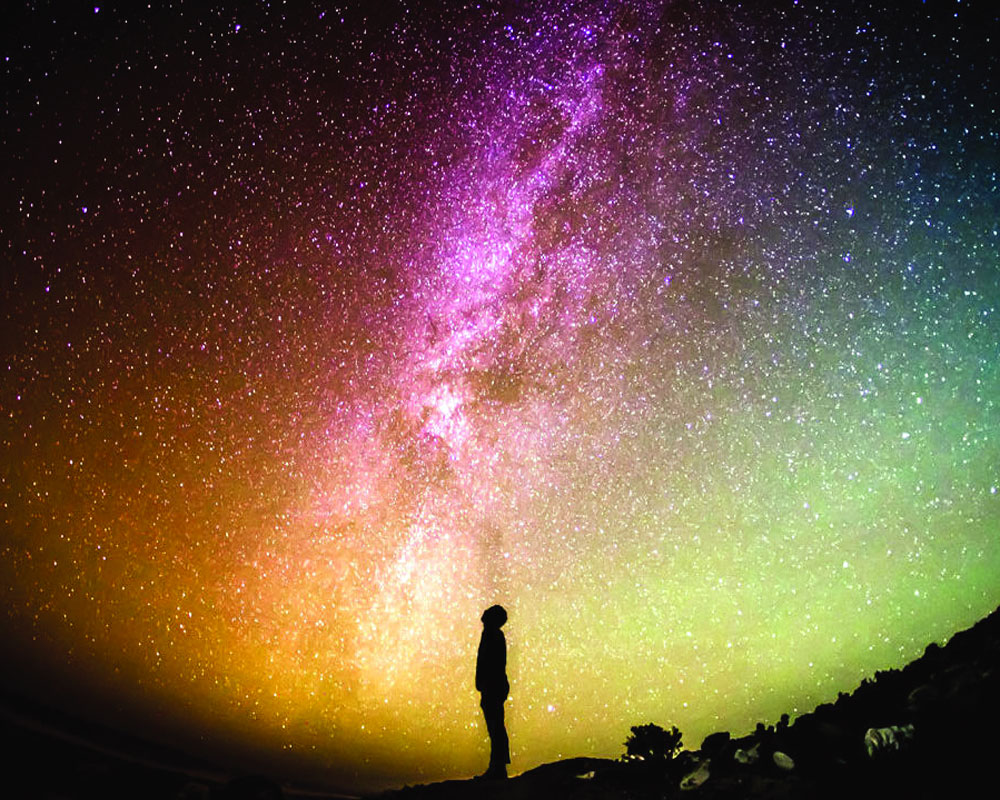 A great majority of people believe in the existence of God, which different philosophies perceive in their own ways. They believe that there exists an eternal reality that creates, sustains and recycles life cycle. Also, administers the whole world, having eyes on our conduct individually and collectively. It is, as if, there exists a reality distant from us, who would judge our conduct and set the terms of our future qualitatively, according as one would deserve.

There are many philosophies that do not subscribe to the concept of God, even of Indian origin such as Samkhya, Jainism and Buddhism. The self-acclaimed rationalist just deny the existence, even though they may not be having any philosophy in hand to justify their stand. Many scientists, based on their perception, deny the existence of God. Stephen Hawking and Leonard Mlodinova in their book, “The Great Design”, maintain that “God did not create the Universe and the Big Bang was an inevitable consequence of the laws of Physics. The fact that there is a law such as gravity, the Universe can and will create itself from nothing. Spontaneous creation is the reason there is something rather than nothing, why the Universe exists, why we exist.” I think he had the Christian concept of God in mind, to deny its existence as in their concept, God and Existence are two different realities. That made it difficult for them to reconcile the scientific perception with that of the concept of God. Hawkins has written volumes on the concept of creation, but he could not decipher the dynamics of life holistically, not to say anything on their bearing in human functionalities in their day-to-day life.

There is no denying the fact that ‘God or No God’, there is system in place engaged in uninterrupted creativity, which has been driving the world individually and collectively in almost an autopilot mode. See how functionaries in the cosmos such as the Sun, Moon, and all functionalities of the nature, vital to our life cycle have been going on, following involuntarily developed design parameters mandated for them, and with such precision. One may believe or deny the concept of God, but can anybody exist without the support of nature driven perennial resources? And these resources are not manmade. And that’s what divine creations mean in real terms.

Vedanta says that God is formless and attribute-less, the ‘One’ without a second, having in store the fundamental elements of creation, carrying the potential to manifest all by itself. It is pure consciousness that is all-pervading, and available with all. Consciousness element animates all our functionalities including our ‘power of knowing’. It also lends necessary intelligence to all nature driven functionalities to move in an orderly fashion with precision. Consciousness, thus, weaves through the whole world into a unified organism where no individual has a reality independent of the whole. This concept is quite in conformity with the scientific perception of creation. So said eminent Australian Physicist, Paul Davies: “For a naïve realist, the world is a collection of objects. For a quantum physicist, it is an inseparable web of vibrating pattern, where no individual component has a reality independent of the entirety, included in that entirety is the observer.”

It, would, therefore, be fair to surmise that there is a system in place that would be necessarily having a Primal-Source, having in store fundamental elements of creation, intrinsic to which is the fundamental elements of consciousness. That includes the manifest world with all its diversity and enormity. There are lot of intervening dynamisms operative at visible and imperceptible levels playing in between. All moving in togetherness as a unified organism, have been driving the world individually and collectively. In this scheme of things, courtesy the consciousness element, there always remain connect between the primal source and the manifest. “Without Him, I exist not, without me He is unmanifest,” said Mirra Alfassa, the spiritual consort of Rishi Aurobindo, popularly known as ‘Mother.

According to Vedanta, the living world may get dissolved one day, when it gets back to the primal source, carrying along the seeds of creation. Out of those seeds, a fresh world comes into being. So, the existence is always there in one form or other. So, “Existence is a reality”. For the sake of our understanding, the system would need a naming. If we shed our individualistic belief, what better than the three lettered word “God” to name it.