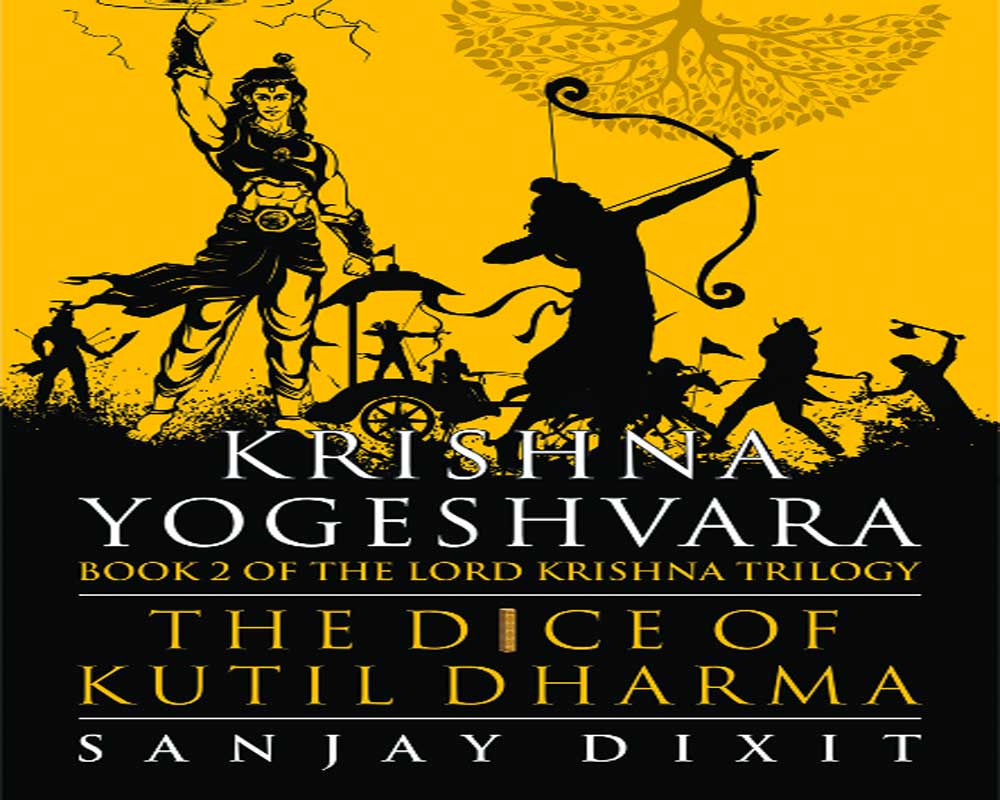 Sanjay Dixit's book two in Krishna trilogy presents the essence of Bhagavad Gita as the culmination of the wisdom attained by Krishna in his quest to champion the cause of dharma, writes Saiswaroopa Iyer

To the delightful cosmos of stories woven around Lord Krishna, comes a new addition. Krishna Yogeshvara by Sanjay Dixit is the second installment of his trilogy, preceded by Krishna Gopeswara, published in Mid 2018 by Bloomsbury. The second installment keeps with the great expectations that the first book set in the minds of readers.

With an intriguing start, embedded with delicious detail, the Krishna Yogeshvara starts off with the elopement of Princess Rukmini of Vidarbha and Krishna. The self-sufficient, poised and curious nature of Rukmini draws the reader right into the story and then we are treated to the story of Krishna with Rukmini being the listener.

Sanjay Dixit’s style of story telling needs to be dwelt upon here to sufficiently admire his balancing of the prevalent western story telling craft in the market along with the key aspects of Indic storytelling, which includes a seeker or listener possessing the adhikara according to Shastras. Commercial aspects like pace, flow, twists are well backed by Indic aspects of philosophy, detail and research.

The combination makes the book conducive to discerning as well as what we could call as ‘airport’ style readers. Even while maintaining the taut pace, the author does take care to present philosophical delights like Uddhava Gita, a wonderful debate between Bhakti and Atmatattva. As a writer in the same genre and a sworn lover of Krishna, I found this delicate intertwining of storytelling techniques as a source of valuable learning.

Yogeshvara spans the story of Krishna from his arrival at Mathura through the intrigues he steers the Yadavas through, including the vengeful wrath of Jarasandha, rise of the Pandavas and ends before the start of the famed Kurukshetra war. In other words, it traces the part of Krishna’s trajectory where he stops being a reactionary hero against Kamsa’s tyranny to a proactive leader and lord who seeks to wrest control away from adharmic forces and establish a rule of Dharma.

My piece of advice to readers is to dwell upon the insightful dialogue that makes us pause and contemplate. Because Krishna Yogeshvara (For that matter, the whole of this series) is not just a story, but if viewed with sufficient bent of enquiry, one can see the civilisational narrative that Dixit tries to weave mirroring the crossroads where India of our times is. Readers of the first installment would remember the genesis of Kutil Muni, who represents an over zealous monotheistic philosophy. Krishna Yogesvara has an addition to the philosophical clash in the form of this character called, Jatil Muni. One can say Jatil Muni is a sophisticated and an affable version of the treacherous philosophy propagated by the Kutil Muni from Krishna Gopeshvara. As Krishna trajectory goes steeply upwards, keeping with the narrative of the Mahabharata, so does the rot in the land of Bharata, propelled by tyrannical forces like Jarasandha and underhanded initiatives of Jatil Muni.

In Dixit’s narratives, care has been taken to craft the characters who fall for the fanatical monotheistic cults. The rise and fall of Kamsa owing to Kutil Muni’s influence is a great example. We encounter another such victim in Yogeshvara — Duryodhana. While Krishna, nimble and wise as he is in the field of Raj Niti and Raj Dharma, works to eradicate the tyrant that is Jarasandha and fills in the power vacuum with Yudhishtira, the young Dharma abiding son of Pandu, who is also loved by the people, Jatil Muni’s tentacles spread deeper than one could perceive, taking the gullible Duryodhana and Dhritarashtra under his influence.

The twists of fate that follow the meteoric rise of the Pandavas resulting in the notorious game of dice and further weakening of the Dharmic foundation of the Kuru family is a well-known story from the Mahabharata. What makes the narrative of Krishna Yogeshvara unique is the careful examination of how mistakes or overlooking of things by even those who are wise, valiant and dharmic costs not only them but even the land they rule and love, dearly.

It is a lesson that the people of India need to learn, revise and review at every opportunity they get to read the scriptures like Mahabharata or their wonderful retellings like the book being discussed. We need to learn it so that Kamsas and Duryodhanas stop rising from amongst us in any millennium. That alone would be a worthy tribute of gratitude we can offer in return for the immortal Bhagavad Gita that Krishna gave us through Arjuna.

In Krishna Yogeshvara, the essence of the Gita is presented as the culmination of the wisdom and realisation attained by Krishna in his quest to protect and champion the cause of dharma. Arjuna’s despondence right at the beginning of the great war is the ending event of this book, leaving the reader with a mindful cognizance of the ‘Yoga’ of Yogeshvara that would follow next.

One does expect the writers of this genre to wield their imagination and creative liberty to present a novel perspective. That makes the ‘how’ of the plot execution very important to the reader’s experience. Without giving much detail away, I want to say that the game of dice, the disrobement and Krishna’s physical intervention (yes, in person) do make for a breathtaking story telling. I remember reading this part of the story in the middle of night with no signs of sleep coming till I could read the following chapters!

While that was about the main plot, there are also smaller joys that ancient history lovers would love to encounter across the book. The author has managed to wonderfully reconcile the mysterious debate around Rukmini’s Arunachali origins. The geography of ancient India and the significance of each location is enunciated with an elan that would make the reader feel like he is truly journeying through the times of our ancestors.

Each of the characters be it major ones like Uddhava, Balarama, Rukmini or minor streaks like Satyabhama add their own touch of liveliness even as the plot thickens in the background. There is also an exploration of ancient customs, of Shastrartha, Purva Paksha, astronomy and other traditions that adds an enriching dimension to those who are new to the wonders of ancient India.

The finale and the third installment of the series, titled Krishna Parameshvara, I expect would explore the crux of the Bhagavad Gita and the ensuing war, a topic of my personal interest and passion. Something I shall wait for, given the promise made by the first two books. If you are a lover of ancient history, Mahabharata, India or Krishna, this is a must read book.

Saiswaroopa Iyer is the author of Draupadi: Tale of an Empress, Avishi, Abhaya and Mauri. She is an IITian and a former investment professional