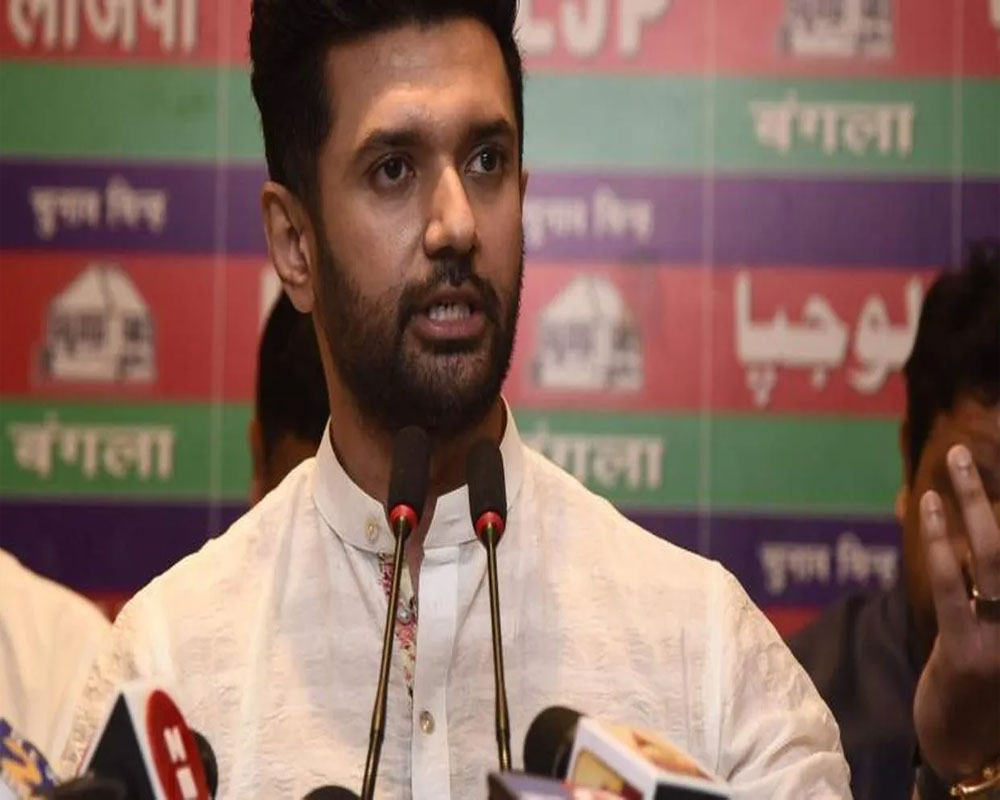 Lok Janshakti Party president Chirag Paswan Thursday made it clear that his parting of ways with Chief Minister Nitish Kumars JD(U) had "nothing to do" with sharing of seats for the assembly elections in Bihar, whose politics his party has "always been opposed to".

Paswan said his party had fought the Lok Sabha polls last year in alliance with the JD(U) because of the "compulsions" brought by the return to the NDA of Kumar, whose party he accused of working against LJP candidates in the general elections in violation of the coalition dharma.

The 37-year-old, who recently lost his father Ram Vilas Paswan, the LJP founder, also alleged that the Bihar Chief Minister had behaved in a haughty manner when the former Union minister had called on the JD(U) chief last year with the request to accompany him for filing of nomination papers for the Rajya Sabha.

"Nitish Kumar recently remarked mockingly that my father could not have got elected to the Rajya Sabha without the JD (U)s support, since we had only two MLAs. He should remember that my father was promised a Rajya Sabha berth by the then BJP chief Amit Shah himself", Paswan told PTI-Bhasha in an interview.

"And I felt so belittled when Nitish behaved in a haughty manner when my father called on him with the request that he accompany us for filing of nomination papers. He came only after the mahurat (auspicious timing) decided for the occasion had passed. No son could have taken such a treatment lying down", Paswan alleged.

The LJP chief also dismissed suggestions that he raised a banner of revolt against the JD(U) after the latter tried to deny the junior alliance partner a fair share of seats and asserted "I met Union minister Amit Shah and BJP chief J P Nadda so many times in the recent times. Not once did the issue of seat-sharing crop up".

"It must be kept in mind that the LJP has never been a fan of Nitish Kumars style of politics. He has harmed the Dalits by creating a sub-group of Mahadalits for his own political gains", Paswan said.

The LJP chief also rubbished the Bihar Chief Ministers much touted saat nishchay (seven resolves) and remarked that the rest of the country was making so much progress and here he was talking about piped water and concrete roads to alleys.

"The Chief Minister never tires of proclaiming zero tolerance for corruption, crime and communalism. This flies in the face of the fact that graft has hit the implementation of every government scheme in the state. Horrific incidents like recent burning alive of a woman after rape took place in Buxar district.

"And communalism? What does he has to say about the comments of Nityanand Rai? He owes an answer. Unlike us, he is still a part of the NDA in Bihar", Paswan said.

Rai, the union minister of state for Home and a senior BJP leader, has kicked up a storm by stating at one of his recent rallies that the victory of the RJD-led opposition in elections could make Bihar a safe haven for terrorists based in Kashmir.

The averment has been criticised by opposition parties as an attempt to polarise voters against the minorities.