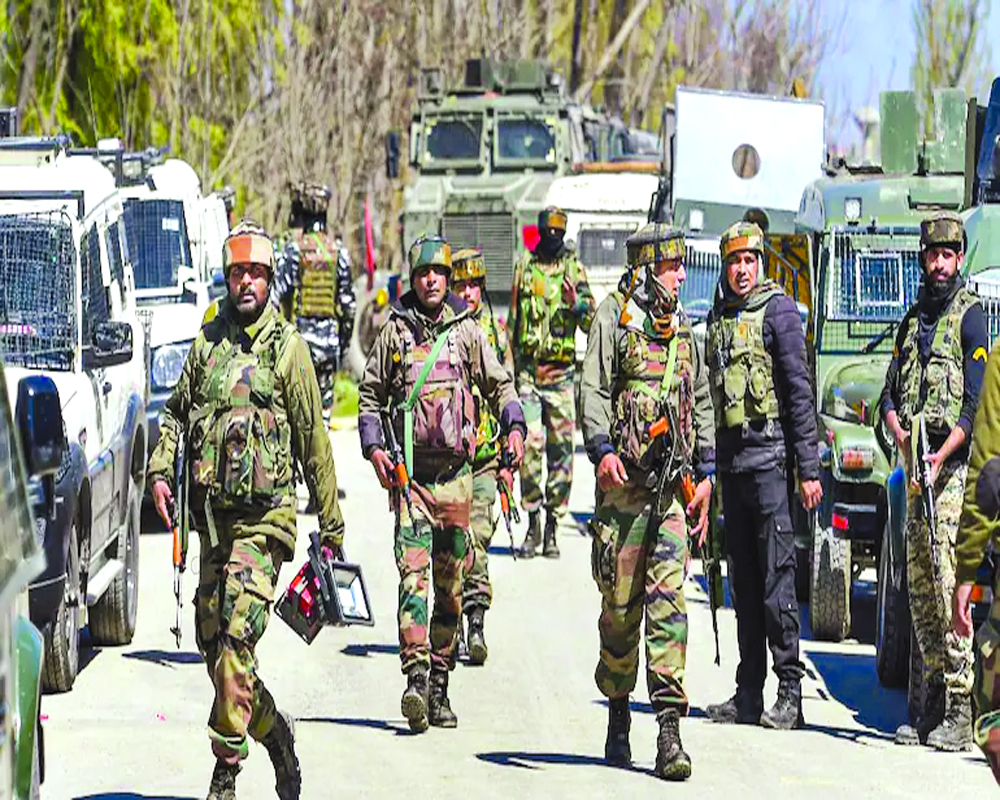 In 2015, the IS declared its expansion to include the Khorasan region, which includes the modern political boundaries of Iran, Central Asia, Afghanistan, and Pakistan. Since early 2020, the IS-K has been regularly publishing its ‘Voice of Hind’ in the Kashmir Valley to radicalise the youth and destabilise the Valley. The scope of the IS-K has expanded to India and Bangladesh. The killings of non-Kashmiris and Hindus in the Valley, apart from the pre-planned vandalising of the Durga Puja pandals in Bangladesh, point out the increasing tentacles of IS-K working in tandem with the Taliban. The developments call for the incorporation of new methods in the domain of counter-terrorism.

The most prominent measure that can be adopted is the pre-detection of the people with terror intent. The current usage of drones, sting operations and informants do not suffice under the prevailing circumstances. Artificial Intelligence (AI) can immensely help the forces and reduce their vulnerabilities. AI technologies are being used actively by many nations for policing and counter-terrorism operations with offensive weaponry. The objective here is to make accurate predictions and adopt an approach to 'what will happen' rather than 'what happened'?  The government should recognise the legal entity of the AI technologies for counter-terrorism operations. It should become legally obligatory for the telecommunications service providers to mirror the conversations of suspected terrorists in sensitive zones such as Kashmir, Punjab and West Bengal, apart from the other border areas.

Security agencies should have unhindered data access to predict future radicalisation apart from the spread of fake news that supplements the ulterior agendas. Tracking the financial transaction information and the travel patterns of suspected individuals apart from identifying sleeper cells that purchase dual-use explosive materials are some of the methodologies followed.To enhance the efficacy of the existing methods and check further radicalisation apart from the exposure to other hybrid warfare tactics such as fake news, the surfing data of institutes of higher education should be monitored.

New indigenous platforms supporting the Google and Yahoo search engines that identify potential recruits through scanning their internet browsing history should be encouraged. These surveillance centers and their servers should be under the strict vigil of the central police forces or the armed forces. Google has developed the redirect method, which uses search algorithms, keywords, and phrases frequently used by people with violent tendencies.

The second step for pre-detection can involve reversal through psychological and mindset change throughsoft counter-radicalisation measures that can be locally tailored through AI. Such novelty has to be brought about in counter-terrorism operations. For instance, Saudi Arabia has a holistic counter-terrorism program since 2005 that consolidates even the "correct notions and concepts of Islam". 'Sakina' programme is one such example of Saudi Arabia.

According to the reports, one of the most preferred recruitment platforms of IS is Facebook and Twitter, wherein the IS, through its tweets and re-tweets, can create a closed online micro-community around the recruit or the targeted recruit. As the communication between recruit and the handling agency develops, end to end encryption platforms like WhatsApp and Telegram are used for private 'dark' conversations to compel the individual to commit violent crimes.

The problem lies in ‘one standard encryption’ policy throughout the country, making no distinction between an 'operational' area and a 'peace' area. A counter move can perhaps be possible wherein sensitive areas are out of bounds for these encrypted platforms due to national security. Privacy perhaps should only be allowed in 'peace' areas where there are no immediate threats to national security. As new threats such as Talibanization of Pakistan and re-radicalisation of the Valley emerge, it becomes imperative for the government to adopt novel law enforcement tools to counter them.

At the level of land-based counter-terror operations, where troops operate at the level of small teams, methods have to be revolutionised. Besides the satellite data providing real-time intelligence, thermographic cameras can be installed in the forests apart from surveillance from UAVs. In the bordering villages, various AI-enabled cameras with monitoring at two undisclosed locations (to avoid sabotage) can immensely help the security forces. Cameras fitted with Facial Recognition (FR) features can help locate any suspicious 'entry' in sensitive areas.

In the cities, especially around the festivals, crowd scanning with multiple AI tools for locational tracking and thwarting terrorist attacks can be done. In some critical areas, the government can also introduce identity cards with biometric chips that have data of iris, facial expressions, and fingerprints.

The tools of AI can be customised even for regular policing in case the terrorists intermingle with the crowd. For instance, China uses Hikvision and Cloud Walk while the US depends upon Pred Pol in cities like Los Angeles for counter-terrorism and policing. Also, gunfire detection software- Shot Spotter is also used by the American agencies to detect shooting by using acoustic sensing technology to deter crimes.

Even the minute details of the number and the types of weapons in possession of the terrorists and other anti-national elements can be ascertained if specific biologically inspired AI surveillance mechanisms involving high-speed data processing can be used for preventive search operations and threat elimination. The same technologies can also be effectively used during counter-terrorism operations to overview, monitor and report the operational developments of the terrorists to the security agencies.

Third, the Indian industries using 'dual use' AI should be brought within the domain of a new initiative of 'civil-military interface' in which certain companies can be roped into implanting AI technologies to the existing indigenous weapons under the supervision of DRDO. For instance, indegenous guns or rifles can be experimentally mounted with low weight AI cameras or biometric systems with an ability to detect and eliminate potential terrorists if they use a ring of human shields to escape or launch attacks on the forces.

For this, establishing an AI intelligence cell in the armed forces and civilian intelligence agencies with active coordination can probably solve the issues in implementing such novel methods. Agencies have to be working in tandem with detailed distinctions and overlaps of their duties and responsibilities to ensure that there is no 'conflict of interest' which can potentially hamper the counter-terrorism strategies. The larger aim of the AI intelligence cell of the Indian army should be to increase its own operability domestically and develop an ability to be able to work with the AI divisions of our allies such as Israel, the US, and Japan apart from the others. Finally, equal importance has to be given to the increasing role of perception management through regular media briefings by the army to raise the social acceptance of the government security measures. Citizen surveillance and alertness also have to be encouraged to thwart the terrorist attacks.