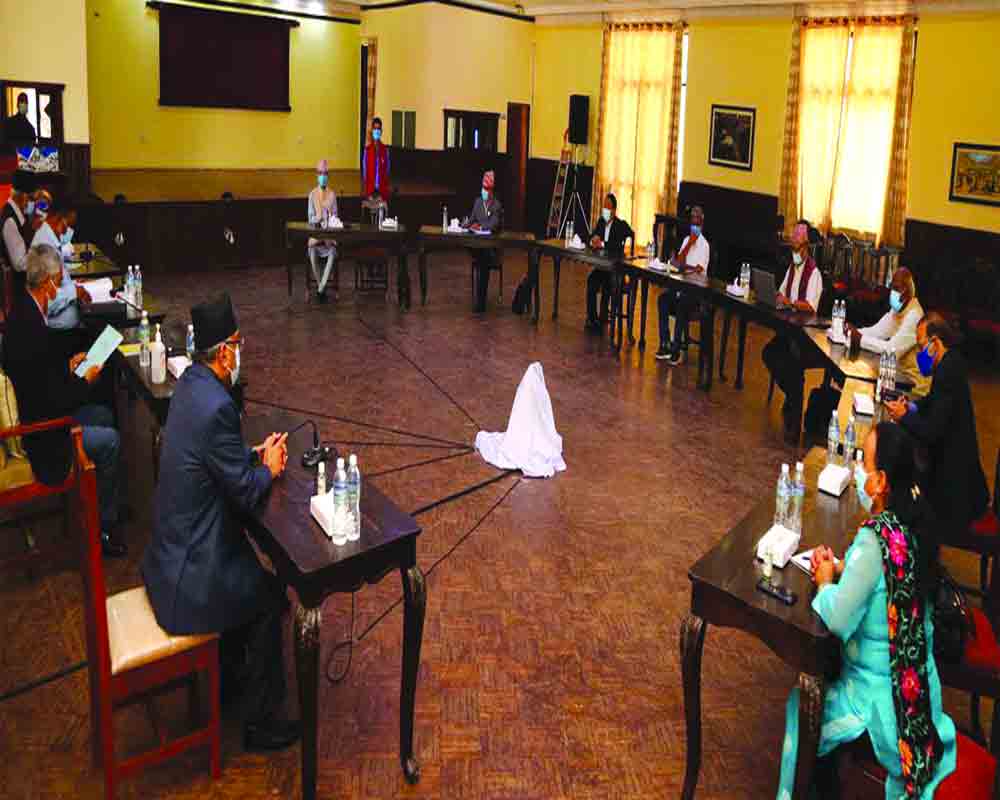 With just five members in his Cabinet, including Prime Minister Deuba himself, political stability hangs on a thin layer of expectations and hopes

The newly appointed Prime Minister of Nepal, Sher Bahadur Deuba, unveiled the Common Minimum Programme (CMP) earlier this month. In less than a month in office, Deuba has launched the CMP as a systematic planning model to address governance, politics, and foreign policy issues in the next one and a half years. With 63 seats in the Lower House of the Parliament, the Nepali Congress is supported by Pushpa Kamala Dahal Prachanda led Nepal Communist Party (Maoist Center), Upendra Yadav led Janta Samajbadi Party and Madhav Kumar Nepal of Communist Party of Nepal (UML). On July 13, the Nepali Congress Party President Sher Bahadur was appointed as the Prime Minister after the Supreme Court verdict on July 12, which quashed an interim Government led by KP Sharma Oli.

CMP — The Only Way

CMP is a fourteen-page document promising to address various issues, including COVID-19, governance, economy, health, education, unemployment, peace and security, and foreign policy. In hindsight, CMP launches a derisive attack on ex-Prime Minister KP Oli. It criticises Oli’s totalitarian governance and unconstitutional acts like dissolving the parliament, irregularities and corruption in purchasing vaccines and medical equipment to fight COVID-19. Meanwhile, the CMP prioritises the fight against Covid-19 and promises to provide free vaccines to all. However, considering the tug of war among the coalition partners on the distribution of portfolios and power-sharing, CMP looks to be the only way to go forward with governance.

The Deuba-led Government is supported by the Madhesh based Janta Samjbadi Party. Hence, a substantial space and due regard is given to the Madhesi factor in the CMP. Categorically, the CMP duly acknowledges and regards the Madhesi Andolan of 2015 against the popular majoritarian Pahadi elite notion of disregarding and demeaning it. Also, under Article 1.4, the CMP calls for the “amendment of the constitution with the consent of the political parties.” Notably, Madhesis have been demanding to amend provisions related to citizenship and political representation in the new constitution. The Nepali Congress Government had ignored these demands while implementing the constitution in October 2015, which resulted in a large-scale Madhesi Andolan with several lives lost. The same Nepali Congress has not only regarded the same Andolan but also promises to amend it.

The bilateral relations with India touched the lowest point under Prime Minister KP Oli. Tensions had become acute after KP Oli released a new political map showing India’s sovereign territorial regions as a part of Nepal in the updated map in May 2020. While India has maintained that it is ready to resolve Nepal’s border concerns through the existing Joint Commission, Oli opted to use it as a tool to posture his ultra-nationalistic outlook to gain political mileage. Contrary to Oli, the CMP aims to resolve the Limpiyadhura, Kalapani and Lipulekh issue through the bilateral diplomatic mechanism. Meanwhile, New Delhi can not be highly optimistic considering the delicate nature of the border row in Nepal, especially when Nepali Congress and its coalition partners had supported a new political map of Nepal.

The Government of Nepal signed the Millennium Challenge Corporations (MCC) in September 2017 with the United States. Under the MCC, the US government will provide a grant worth USD 500 million to increase the availability of electricity, investments, lower-cost transportation, infrastructure development, support regional security and reduce poverty. However, in the last four years, the government remains undecided to ratify in the parliament. Noteworthy, MCC was signed soon after Nepal signed China’s most ambitious Belt and Road (BRI) Initiative in May 2017, and it was seen as a counter to Chinese interests in Nepal. Chinese anxieties over MCC were reflected from its media reports tagging MCC as a political interference in host countries.

Meanwhile, MCC does not find a place in the CMP. Although Nepali Congress is willing to ratify it, Maoist Center claims that it is part of the Indo-Pacific strategy and has a security element. Despite the US Government issuing clarifications, Prachanda’s bonhomie with Beijing overpowers Prime Minister Deuba’s willingness. To recall, China had successfully manoeuvred in Sri Lanka on MCC, resulting in the US withdrawing it from Sri Lanka due to a “lack of engagement” by the host country. Beijing is using a similar tactic in Nepal.

To conclude, Prime Minister Deuba led coalition government is yet to expand its cabinet due to a lack of consensus among the parties on portfolios. With just five members in his cabinet, including Deuba himself, political stability hangs on a thin layer of expectations and hopes. Lately, the political decisions of Deuba are also reflecting an Oli style of politics in bringing new laws to suit his political needs. Therefore, Nepal may witness another phase of looming political instability as the existing political realities provide a meagre space for an ambitious CMP to become a reality.

(Rishi Gupta is a Research Assistant at the Vivekananda International Foundation, New Delhi. The views expressed are personal.)