Party stuck with Gandhis; Gandhis with the party

Party stuck with Gandhis; Gandhis with the party 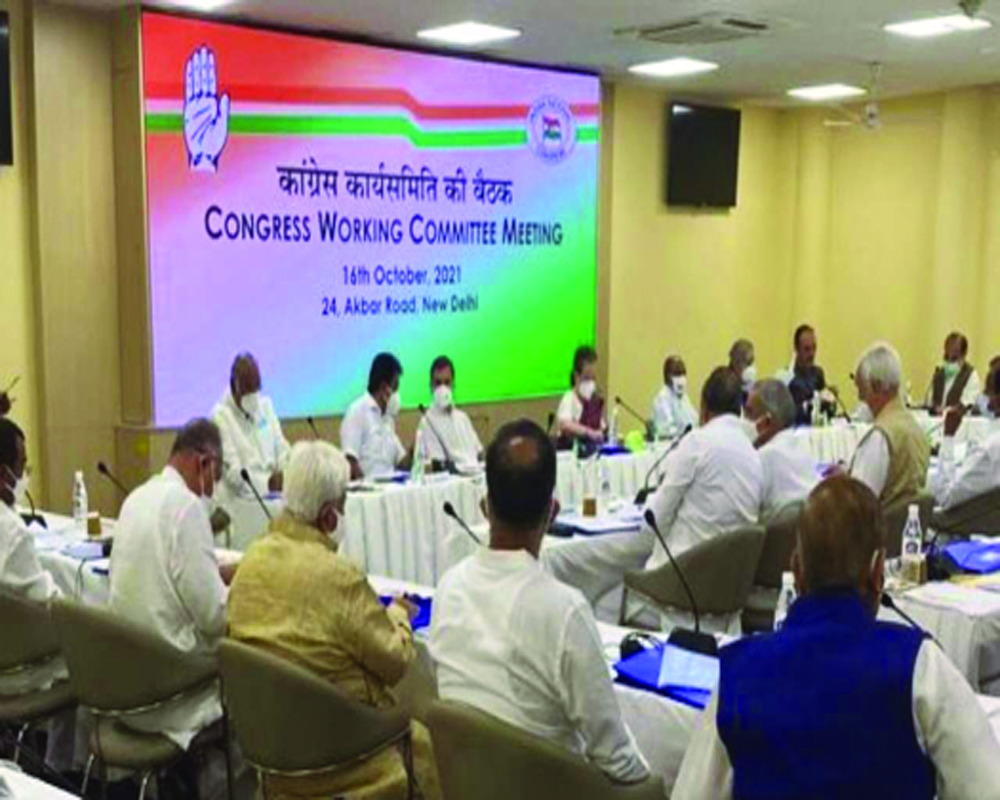 As expected, not even a whimper was heard from the G23 that made much noise in media for months on the need for full-time leadership

The Gandhi family has established its claim over the Congress party this week as seen by Sonia Gandhi’s assertive speech at Saturday’s Working Committee meeting. Her message to the Party in simple words is that “we are the Gandhis, and we rule as long as we want; challenge us now.” As expected, not even a whimper was heard from the Group of 23 rebels that made much noise in the media for months on the need for full-time leadership and organisational elections. As expected, the CWC unanimously expressed confidence in the Gandhi family. The CWC meeting went off as per Gandhi’s script.

Indeed, she shut them by giving a road map for elections, but it will take place only next after the crucial elections to some States taken place.

The loyalists who numbered many also raised a chorus for Rahul Gandhi to take over the party. He has condescended to consider the issue keeping his options open. Meanwhile, he will continue to make decisions with his sister Priyanka Gandhi and impose their favorites on the Party in powerful positions as they have done with Punjab leader Navjot Sidhu and elsewhere. They will also have a free hand in distributing tickets in the upcoming elections.

Sonia has announced that she is a ‘full-time and hands-on’ president, but this will be tougher than it was for her in 1998 or 2004. Then, she was much younger and had reasonably good political advisers. There was a mystique around her. Those leaders, like Arjun Singh, ML Fotedar, Ahmed Patel, and AK Antony, were experienced and shrewd politicians. Today, she has to run the Party through her children while taking flak for their immature decisions.

Sonia Gandhi fights well when there are challenges, as she has had shown since 1998. She took over the reins of the Party when it was sinking under Sitaram Kesri’s leadership and a surging BJP. No one expected the UPA to win in 2004. The real coup was when she chose to do back-seat driving rather than become the Prime Minister and she ‘appointed’ Dr Manmohan Singh to the post. She ran the Party and the Government for the next ten years from remote. A Gandhi family member at the helm is certainly a comforting feeling for Congress persons, not with standing the opinion of voters.

When Rahul resigned owning moral responsibility for the Party’s poor show in 2019, the Party could not look beyond the Gandhis. Rahul got what he wanted —an unassailable decision-making power without responsibility. By now, his sister Priyanka Gandhi has joined her brother in taking decisions from afar.

The second challenge is to win some States in the upcoming Assembly polls. Uttar Pradesh is crucial though the Party has not tasted power there since 1989. It was in a position to win Punjab, but the Gandhi siblings spoilt it by choosing an undeserving Sidhu as PCC chief.

The third is reviving the organisation’s machinery. The general secretaries in charge of poll-bound States should spend more time on the ground. The selection of candidates is vital. Sonia needs to enthuse the organisation. She should set up booth committees that play a crucial role at the time of elections.

The fourth is to choose vital issues for exposing the Modi Government. There are many such issues like petrol price hike, inflation, farmer’s agitation, COVID handling and many more. Sonia needs foot soldiers to do the propaganda.

The fifth is uniting the Opposition. Many of them like Mamata Banerjee and Sharad Pawar are making efforts to join the resistance. Otherwise, Modi has the advantage even in 2024. Fortunately, Sonia has got adequate respect and command from the opposition leaders.

But before everything, she must address the grievances of the Group of 23 rebels and bring them back to her side. They cannot be suppressed as leaders like Ghulam Nabi Azad, Anand Sharma, Shashi Tharoor, Kapil Sibal, and Manish Tiwari are articulate. As Sonia herself said in the meeting, unity and discipline in the Party are very important.