The Dandi march still teaches the importance of sacrifice

The Dandi march still teaches the importance of sacrifice 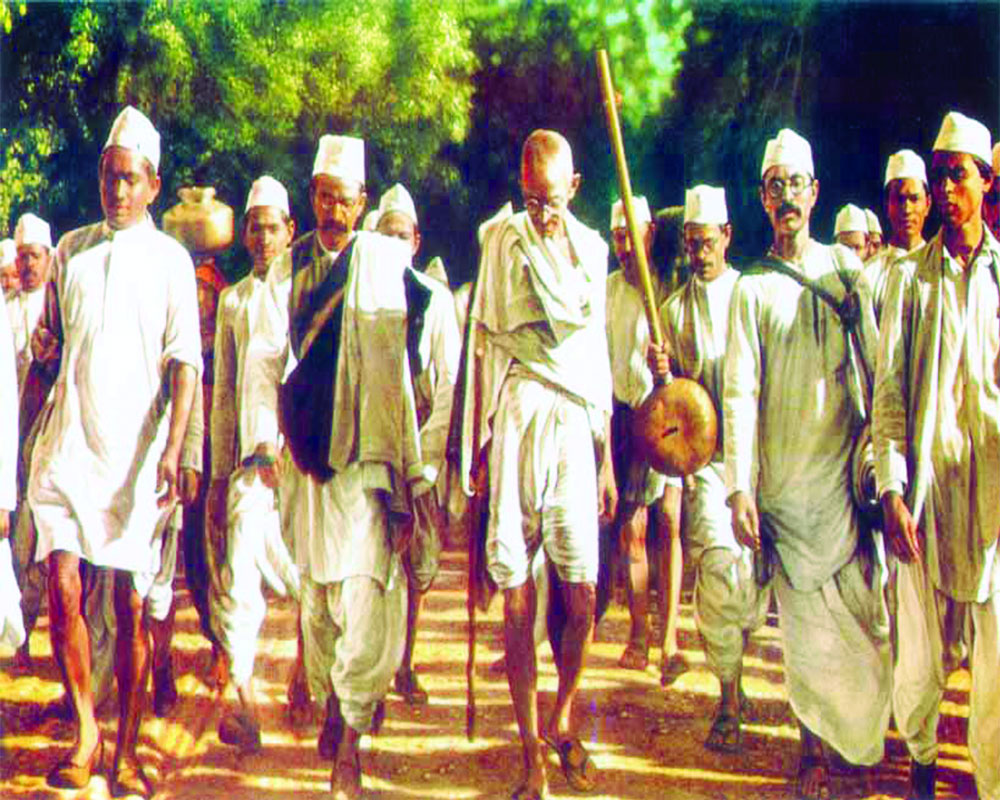 But there is a sea change in the situation of the country then and now. The journey of India will now be defined by self-reliance and self-respect

The historic Dandi march that began on March 12, 1930, played a significant role in India’s freedom struggle as it was the most influential and inspirational moment in the fight for independence.

This is the reason why the  day marking the beginning of the Dandi  march was chosen to launch the celebrations surrounding 75 years of India’s Independence. The events after the Dandi yatra, certainly brought the colonial rulers under pressure. Through this movement, Mahatma Gandhi once again introduced the power of truth and  non-violence to the world.

The system of making salt in India had existed since ancient times and the tradition was carried forward by salt farmers. In Bihar and many other provinces, this work was left to a special community. Gradually, the technique of making salt started to improve, but over time, salt was also beginning to become a commercial item. The Dandi March was part of Mahatma Gandhi’s non-violent protest against the British monopoly on production of salt.

In a letter to Lord Irwin on March 2, 1930, Mahatma Gandhi  said that “politically, our position is no better than that of slaves, the roots of our culture have been hollowed out.” He further wrote that   “this letter is not intended as a threat. It is just a simple and sacred duty of a Satyagrahi. Therefore, I am sending it through a  young English friend who is an advocate of the Indian view, who has full faith in non-violence and who  has been perhaps sent to me for this purpose only by the Almighty.” The name of the Mahatma’s friend was Reginald Reynolds, who had lived with him in the Sabarmati ashram and had faith in the Mahatma’s philosophy. In the letter to Lord Irwin, Mahatma Gandhi informed him about the decision to break the salt law which Gandhiji felt was the biggest injustice to the poor.

The Dandi March started from Sabarmati Ashram on  March 12 as per schedule. At exactly 6:30 am, Gandhiji left the ashram with 79 followers and started the yatra. They completed 241 miles up to Dandi in 24 days. During this period, the Father of the Nation used to address the gatherings during the yatra.  His speeches were successful in influencing the minds of the people against the policies  of the British.

During the march, it was clearly spelled out that the people should keep their attention focused on the Salt Law itself and at the same time it was ensured that civil disobedience was not resorted to before Gandhiji broke the Salt Law at Dandi. With the permission of Gandhiji, a pledge was written for the satyagrahis. The letter stated: “I am ready to go to jail and I will be happy to bear whatever hardships and punishments will be meted out to me as part of this movement.”

On the night of April 4, 1930, the padyatra entered Dandi. Hundreds of Gandhian satyagrahis gathered on the Dandi coast in the morning of April 5 wearing khadi. A Press briefing was also organised at Dandi. Sarojini Naidu, Sumant, Abbas Tyabji, Mithuben Petit  joined the Dandi march. In his address, Gandhiji gave information about breaking the Salt Law next morning.

The Mahatma broke the Salt Law by the simple yet symbolic act of picking up a fistful of salt on the Dandi coast on the morning of April 6. He was immediately detained under British law.

Prior to his arrest, Gandhiji had clearly sent across the message that Swaraj  cannot be sustained without sacrifice and, therefore, it is possible that people will have to make unlimited sacrifices to achieve it. A true sacrifice is one in which  one side suffers  without resorting to retaliation. Describing the Dandi march, the reporter of The Daily Telegraph, London, Ellis Ashmead-Bartlett wrote, "Who knew that this event will become historical in the future? Is the arrest of a Mahatma a  small  thing? No doubt, Gandhiji has emerged as  a Mahatma and a divine man in the eyes of crores of Indians today.”

This was the most important turn in India’s freedom struggle, which emerged from the Dandi March. People understood  that non-cooperation was not just an idea but a well-thought-out plan for resistance to the British rule. With Gandhiji’s visit to Dandi, a wave of nationalism swept across India. The symbolic Dandi yatra created a sentiment in favour of freedom among the people. Gandhiji’s Dandi march still shows us how to take the right decision in difficult times and highlights the importance of sacrifice to the people.

After about 91 years, I shall be  treading on the same soil in a padyatra on the occasion of 75 years of independence. But there is a sea change in the situation of the country between then and now.  The journey of India will now be defined by  self-reliance and self-respect. We will no more be seekers and our image on the world  canvas will be that of a contributor. In this hour  of crisis across the globe, we have delivered medicines and vaccines to various countries. That shows that  our age-old belief in “Vasudhaiva Kutumbakam” is still alive.

India wants to speak the language of labour and toil so that our future generations are carved out in strength. The Prime Minister envisions that when the country celebrates the centenary of India’s Independence, then our achievements and cultural glory should be a shining example before  the world.

The writer is Union Minister of State (Independent Charge),Ministry of Tourism and Culture. The views expressed are personal.