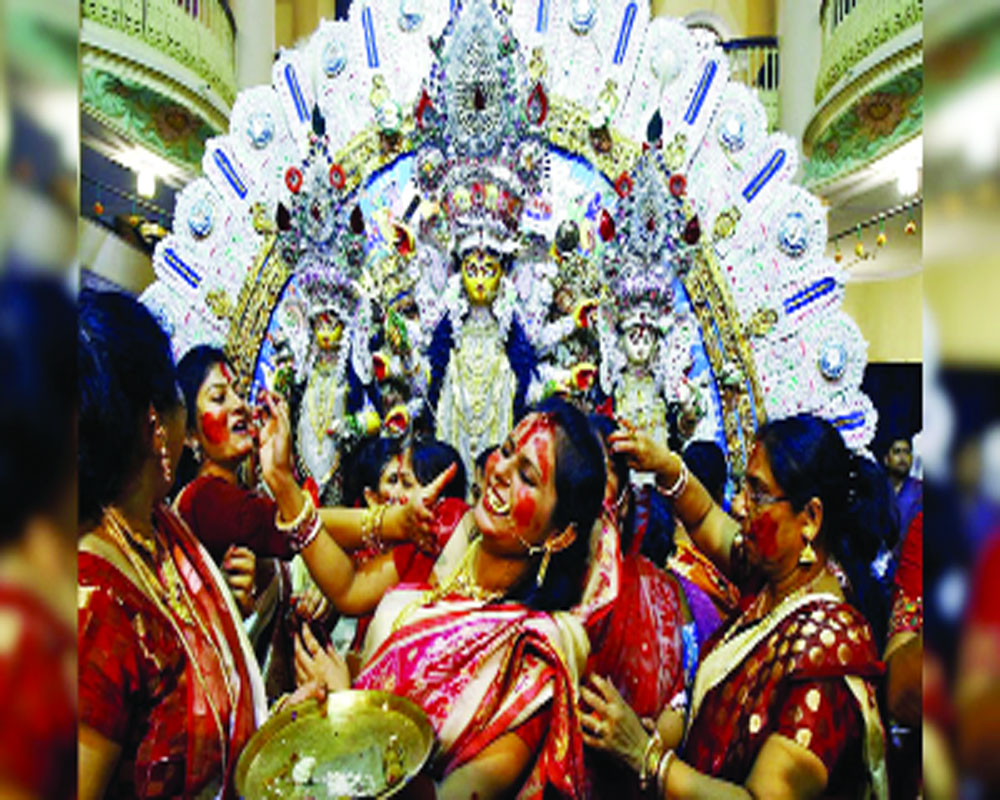 India has a tradition of worshipping in celebratory mode. When you offer prayers in a festive mode, you enjoy doing it spiritedly. You then involve your body and mind as a whole into prayers. Evidently then, you can expect desired result. The purpose of most of the festivities is not just pursuance of some age old arbitrary beliefs. The intent is to be geared up from within to encash the opportunities arising in emerging productive cycle. Also, combat and overcome all challenges coming in the way in all strength and with ease and comfort.

Even the timing is important. The festive season begins with the onset of Durga Puja on the first lunar day of waxing phase of Ashvin month. It is marked with a particular phase of nature during its annular course, when its energy orchestra is about to strike its lowest. For, the Sun, nature’s prime energy provider operating from the front, begins to move towards to the farthest end, from the part of the globe we are situated.

During its southerly course, the Sun would be closing up with the western horizon, where as we are situated towards the eastern horizon in the northern hemisphere. The weather cycle also remains in a state of flux at this point of time — from Autumn to Winters — which is often disease prone. Accordingly, we need to be invoke our shakti from within to bear with the callings of changing weather.

During Navaratra, which has just concluded, we begin with offering prayers to Durga. Nothing moves in this dynamic world without shakti. Physical efforts apart, even mind process is a play of shakti. The irony, however, is that shakti is a double edged weapon. It can be used productively, and if misused knowingly or unmindfully, could prove self-defeating, as shakti doesn’t have a drive of its own. The way you apply is how it will act.

Focus on the imagery of the Goddess Durga, shows us the way to direct our shakti rightfully towards productive application. That is why all forms of shakti — physical, aspirational or intelligence — are epitomised in motherly forms. For, mother pulls in all resources in hand, to bear with and then selflessly nurse the child. Durga is mounted on a lion. When it goes for a kill, moves carefully and intelligently without wasting its energy, till the prey would be within reach. It then evokes all its energies and promptly strike. It, however, won’t go for its next kill, till it becomes hungry once again. So, even the killing is need based, not greed based. Armouries in her 10 hands are there to combat challenges coming from all directions, from within or beyond.

The particular focus is on the inconsistencies of our 10 sensory organs, which, with its monkey like flirtatious tendencies, could prove more devilish than external forces. Lotus flower associated with mother symbolises being devoid of any sense of ego, and unattached lends support in equal proportion to all. Though lotus grows out of mud in a pond, its leaves and petals won’t hold even a trace of muck or water droplets.

During its nine day sojourn, the first three days are exclusively dedicated to Durga, the epitome of physical power. During the following three days, Goddess Laxmi identified with our creative urges and aspirations is also worshipped. Last three days of worship, involves Saraswati identified with wisdom and intelligence. The purpose is to use the three modes of shakti in a co-ordinated way, so as to derive maximum benefit out of our initiatives. Shakti is to be directed towards fulfilment of our creative urges and aspirations. Intelligence, in the first place, helps weigh all options in hand, overcome our greed, and prioritise need based application. Second, it helps articulate our actions and responses in a measured way. Third, it helps combat emerging challenges with prudence and patience.

Durga Puja is followed by Diwali, when we encounter the darkest night, as both the luminaries, the Sun and Moon are bang on the western horizon. On this day, Goddess Laxmi is worshipped once again, and in Bengal, Goddess Kali. The purpose obviously is to be geared up afresh to negotiate the callings of emerging productive cycle. The festive season concludes with Chattha, celebrated in Bihar and eastern part of UP, which of late with migration, has been spreading to the other parts of the nation. On this occasion, as the Sun begins gaining ground, we offer our prayers to thee to further gain strength.