The way to change

The way to change 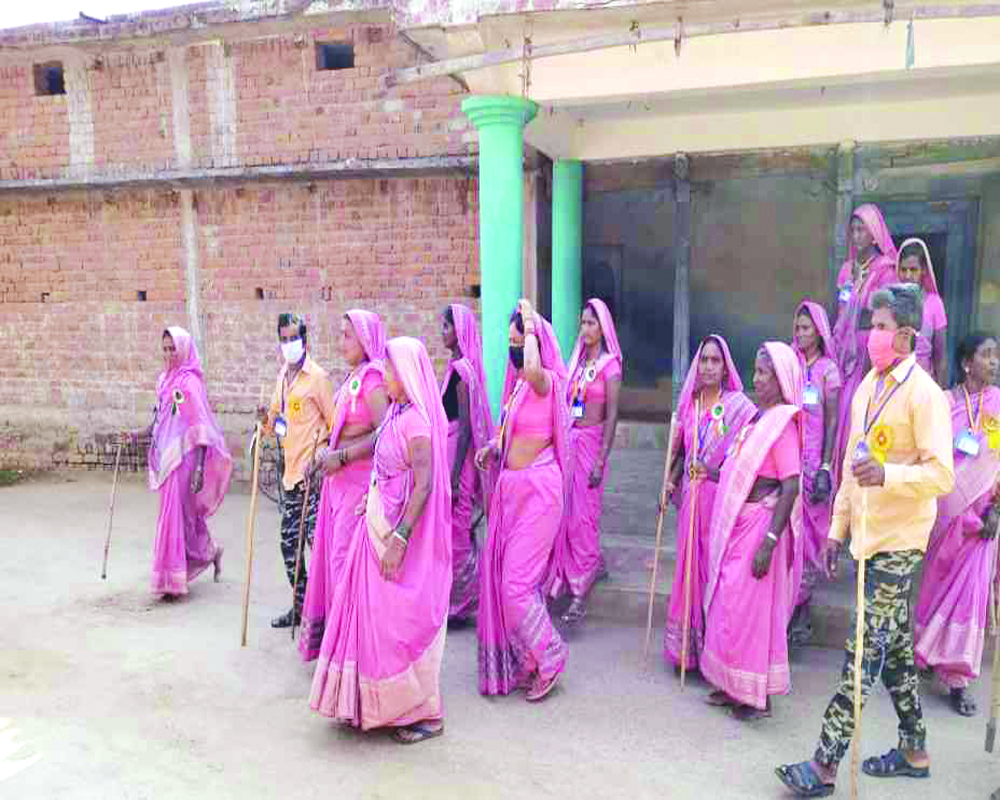 As soon as the sky starts turning dark in Arand village in Chhattisgarh’s Mahasamund district, a group of women gathers at the village junction. Carrying sticks and torches, this all-women group patrols every corner of the village till 10 in the night to ensure that no one consumes or makes alcohol in their houses. Known as the Swatantrata Sangram Senani Budhanshah Mahila Commando Group, it was founded by Saraswati Dhurav who was disturbed by the increasing cases of violence against women committed by alcoholics.

Till a year ago, the atmosphere of this village was quite disturbing. Women and children felt unsafe not only outside but within their own homes as well. Women and girls would not step out in the evenings fearing alcoholics and, inside their homes, violence inflicted upon them by male members of the family. The environment was unsettling, to put it mildly.

Saraswati, who had come to this village 25 years ago after her wedding, had been witnessing a gradual increase in alcoholism here. After stoically bearing it for several years, she gathered courage and decided to intervene. In January 2020, she suggested forming an all-women group to fight the root cause behind violence against women — alcoholism. This led to the formation of a group of 27 women in association with the local police administration. A massive campaign was launched by the group to prohibit liquor in the village as women started keeping a watch on the activities of men.

Someone who pursued formal education only till the sixth standard, Saraswati, while recalling her initial days as a commando, informed that it was not easy to carry out a door-to-door campaign on the prohibition of alcohol in the village. She shared. “We have faced abuses and insults from several people. They said when the government is unable to control the problem, why are you bothered?” The group, she said, was aware of the obstacles they would face while undertaking this critical task. Despite several challenges thrown at them by men and women, alike, they did not give up. This persistence helped Arand become a liquor-free village.

Besides 27 women commandos, this group, which is named after Freedom Fighter Budhanshah, consists of 11 men while village heads are the patrons. Narupa Druv, the group’s vice president, pointed out that one of the most challenging tasks is to create awareness among people as they simply do not understand and continue to consume, make and sell liquor in the village despite the complete ban. To handle such cases, a meeting is held at the panchayat level and the offender is charged a fine. If required, the help of the police is also taken. “We have caught around 10 people making raw liquor in their houses and have already taken action against them,” informed Narupa.

These women commandos also offer their services in handling the alcoholics and miscreants in other social events organised in the village. The role of women commandos has proven to be of great benefit to the villagers, especially during the lockdown. They took charge of ensuring that workers returning from different states followed the 14-day quarantine rule. They also took care of their food and water during the period.

According to Keshav Kosle, police station in-charge at the block headquarters, Pithora, several such organisations keep springing at village level but die out soon because of several challenges. “However, Arand is one such village where women commandos are still working effectively. We have extended our support in taking action against defaulters, in coordination with them,” he remarked.

The village head, Devraj Singh Thakur, takes pride in the commendable work being done by the women of the village. He said, “The formation of the group has resulted in a lot of improvement in the village.” Ajay Patel, a resident, born and brought up in the village, expressed that earlier the village was known for alcoholism, and now, for being liquor-free.

Swatantrata Sangram Senani Budhanshah Mahila Commando Group has become the epitome of inspiration in surrounding villages. Following their footsteps, women commando teams have been set up in several nearby villages such as Bundeli, Nayapara, Suteri, Chhindauli and Parsada. One such group is Maa Mahila Samiti of Bundeli. Suniti Chandrakar, the chairperson of this group, highlighted how the entire village was mostly involved in making illegal liquor. “The situation was such that not only men but women, children and elders were involved in brewing liquor. But ever since we formed this group, liquor has been banned,” she shared.

Lack of awareness, illiteracy, unemployment and poverty lead to alcoholism. It is not restricted to just Mahasamund district, the consumption rate of alcohol in Chhattisgarh is quite alarming. In 2019, as per a report, Chhattisgarh topped the list of states with high alcohol consumption. According to the data presented in the Chhattisgarh Legislative Assembly, more than 35 per cent of people drink alcohol in the state, which is the highest in the country. Chhattisgarh has a population of 2.55 crores. The revenue it receives from liquor sales is about 4500 to 4700 crores every year. If we divide the revenue from the population, the consumption of alcohol in Chhattisgarh is about Rs 1,800 per person per day. As of now, there are 337 country-made liquor and 313 foreign liquor shops in the state which are operated by the State government. There is a need to see beyond the profits made by selling alcohol. The uncontrolled consumption of alcohol has wreaked havoc on the lives of women especially in rural areas.

A report by Women’s Media Centre claims that, of married women who are abused in India, 82 per cent are married to husbands who drink heavily; 90 per cent of the wives of male drinkers in rehabilitation have been physically abused by their husbands. Women coming together to advocate for alcohol prohibition in villages is certainly a powerful move that reflects their collective agency to fight violence.

Be it Chhattisgarh, Bihar or Andhra Pradesh, rural women are running effective campaigns against alcohol abuse and are demanding strict policy in place against alcoholism. Initiatives taken by women commando groups in different states to regulate alcohol consumption have started bringing small changes to their regions. There is a lot to learn from these initiatives.

— (The writer is a recipient of Sanjoy Ghose Media Award 2020)