OBC is the new catchphrase in poll-bound Uttar Pradesh

OBC is the new catchphrase in poll-bound Uttar Pradesh 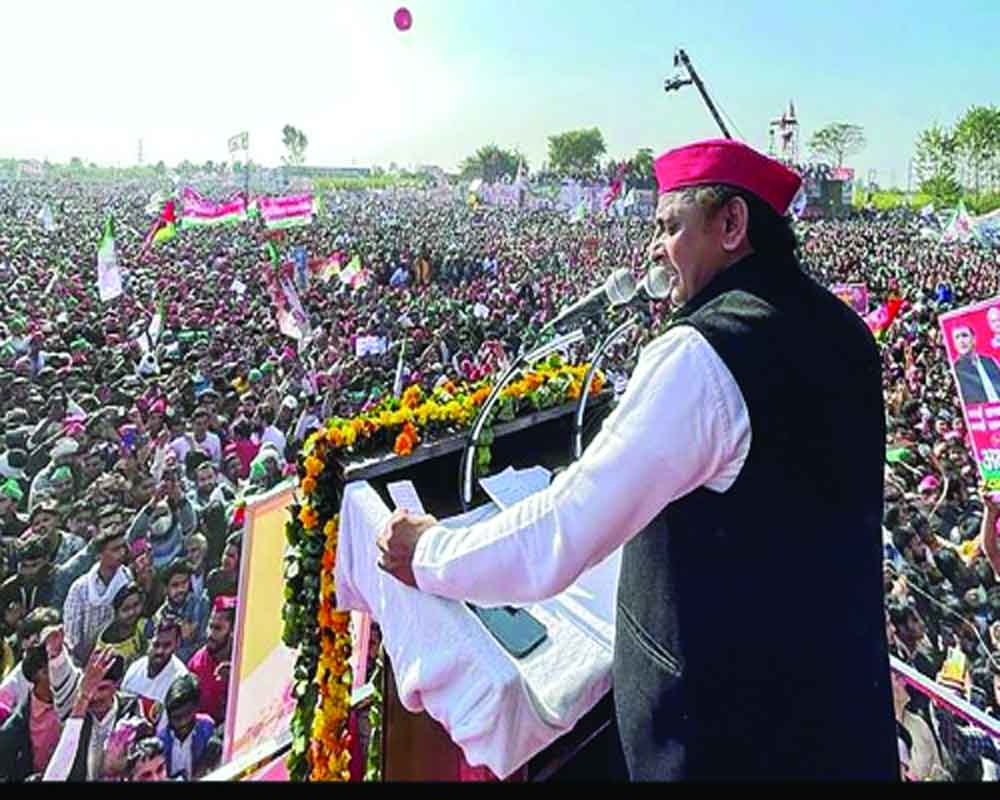 Former Uttar Pradesh chief minister and Samajwadi Party chief Akhilesh Yadav has emerged as the primary challenger to the BJP in the February Assembly polls now that the poll scene is explicit.

The massive turnout at the young Yadav chieftain’s election rallies is testimony to Akhilesh’s growing popularity. Most psephologists say that the polls have become a bi-polar contest between the Samajwadi Party and BJP. Recently, Prime Minister Narendra Modi also remarked about the growing support base saying ‘Lal topi’ ( red cap) is a ‘Lal batti’ (red light) for UP.

Yadav Junior came out of the shadows of his father and former chief minister Mulayam Singh Yadav a long time ago, and today he is the only leader for his party. Akhilesh has gone through many ups and downs in his two decades of political life. Leading the election campaign for the coalition, he is a much more mature politician today.

SP’s political strategy is well calibrated. Akhilesh has strengthened himself within the party and sorted out his family fights with his uncle Shivpal Yadav who is now back in the fold.

Single-handedly he stitched up alliances, particularly with Jayant Chaudhary-led Rashtriya Lok Dal. What is working to the benefit of the SP is the support from the farmers community in western Uttar Pradesh. They have been upset with the BJP for almost one year, as the Centre did not heed their protests against the three farm laws passed in Parliament in 2019. The Jats hold the key in Western UP and they back RLD.

The junior Yadav has astutely moved away from his father’s trusted Muslim-Yadav formula to a new kind of social engineering for a larger social coalition. Akhilesh has learned lessons the hard way. He had experimented with several combinations. As joining hands with Congress in the 2017 Assembly elections and with the BSP in 2019 polls failed to yield the desired results, he is now depending on smaller caste-based regional parties, particularly those with a non-Yadav OBC base. He has roped in smaller parties like Rashtriya Lok Dal, Mahan Dal, Sanjay Singh Chouhan’s Democratic (Socialist) Party, Krishna Patel’s Apna Dal (Communist), Rajesh Siddhartha’s Political Justice, and Ram Raj Singh Patel’s Akhil Bhartiya Kisan Sena.

Interestingly, the SP chief has promised a caste census if elected to power. Though backward classes parties have been in power in Uttar Pradesh since the early 1990s, his predecessors did not take any risk.

His calculations are based on the Samajwadi Party’s internal surveywhich revealed that in the 2017 elections, over 50 per cent of OBCs voted for BJP while around 15 per cent supported SP. Akhilesh has given an open invitation to all parties and sections to join him in throwing out the BJP.

He successfully poached on several OBC leaders from the BJP, including Swami Prasad Maurya, in his efforts to broaden his party’s social base. Two influential ministers and some MLAs quit BJP and joined SP days before the poll announcement. Swami Prasad Maurya, a powerful OBC leader and five-time MLA, joined BJP in 2016 after quitting Mayawati’s Bahujan Samaj Party. Many from BSP like Yogesh Verma, Mithai Lal Bharti have already switched to SP.

As for countering Kamandal politics, Akhilesh has embraced the “me too” line to counter BJP’s politics. He has also promised to establish Vishnu Nagar and a massive statue of Parashuram on the Purvanchal expressway.

He raises other issues like Covid handling, development, law, and order, poor health infrastructure, reservation, and inflation. He also presents the controversial incidents in Gorakhpur, Hathras, and Unnao.

BJP is counting on Brand Narendra Modi to get votes. Yogi is contesting for the Assembly for the first time. The BJP seems to be banking on the polarisation of Jat votes like in the 2017 polls to maintain its dominance.

To counter the SP caste strategy, BJP has given tickets to 44 OBC names, including 16 Jats, followed by 43 upper castes and 19 from Scheduled Castes. The list indicates that the BJP is hopeful of getting the Jat votes in western UP, where the rural community is concentrated.

Priyanka Gandhi Vadra, who leads the Congress in UP is banking on women’s votes and has promised all kinds of freebies. The BSP chief Mayawati is lying low but working quietly after her party’s miserable performance in 2017 and 2019.

UP is known for casting votes on a caste basis. Whether Akhilesh’s Mandal politics or BJP’s Kamandal politics works in these polls is a million-dollar question.