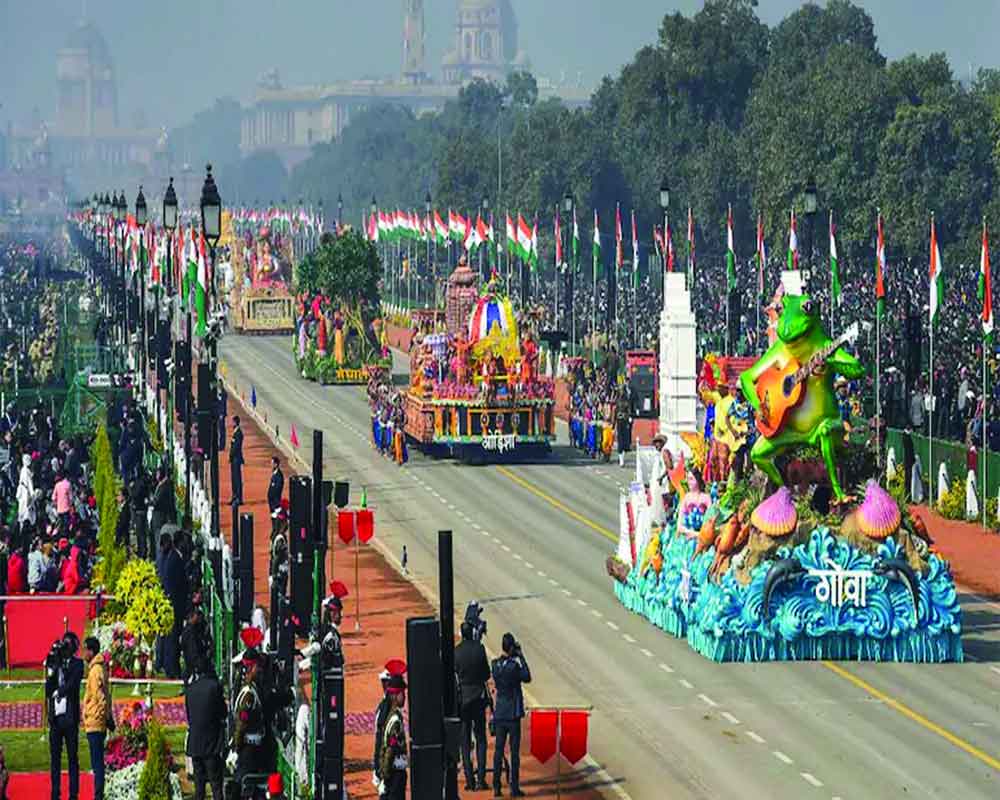 Petty politics ought not to ruin the solemn atmosphere in celebrating the Republic Day or Independence Day. Unfortunately, more avoidable controversies arise between the ruling party and the opposition. For instance, while there is a well-established system for selecting the tableaux, the process always becomes a flashpoint for regional politics. This year too, there is furore in the opposition-ruled states as the Centre rejected the tableaux of West Bengal, Kerala, and Tamil Nadu, among others. Chief Ministers like Mamata Banerjee and M.K. Stalinhave written to the Prime Minister to reconsider the decision but in vain.

Only 12 states eventually made it to the list, including poll-bound states of Uttar Pradesh, Uttarakhand, Punjab, and Goa.  The selection criteria was that the R-Day parade must reflect the cultural diversity of India and the role of various communities in building modern India. Why shouldnot every State get an opportunity to display things it wants to?

This year Republic Day is important because the theme is India@75 and getting a place in the parade is a matter of prestige for the states.  It is also amidst the Covid pandemic which has shattered the globe.

On the 75th Republic Day on Friday, one must recall the first Republic Day in 1950. It was a simple affair. The then last Governor-General of India, C. Rajagopalachari, read out the proclamation of the new Republic and the election of Dr. Rajendra Prasad, as the first President of India, at 10.18 AM on a chilly Thursday morning.

The Constituent Assembly adopted the Constitution of India on November 26, 1949, and came into effect on January 26, 1950.Historically it was on January 26, 1930, Congress committed the nationalist movement to Purna Swaraj (total independence).

Delhi held the first Republic Day at the Irwin Amphitheatre (now Major Dhyan Chand National Stadium). There were no performances and floats. It was a simple function with the Army band, flag hoisting, and national anthem. The tradition of a parade began only from the next Republic Day. It is the main attraction of India’s Republic Day celebrations, which last for three days since then.

The Parade is primarily a military affair. The might of our defence services, including the latest tanks, missiles, radar systems, air force planes, defence communications systems, etc., mounted on trucks, are paraded, followed by a cultural pageant comprising tableaux. It is here that the participant states showcase their unique culture and achievements to the nation. The selection depends on a combination of factors, including visual appeal, idea, theme, music, and micro detailing.

From 1950 and 1954, the parades were held at the Red Fort, National stadium, Kingsway Camp, and the Ramlila ground. It was from 1955 that Rajpath became the regular venue. It was discontinued in 1963 when the country was engaged in war with China, and was replaced by a procession of leaders led by Prime Minister Jawaharlal Nehru, his cabinet members, political representatives from states, students and teachers from Delhi University, etc. The Parade was restored the following year.

Although they were disappointed with the Centre’s rejection of tableau, the concerned opposition chief ministers have gone to the media to showcase their themes in their states. They feel the Centre was playing politics in the selection. Mamata Banerjee raised a point that their tableau commemorated the contributions of Netaji Subhas Chandra Bose on his 125th birth anniversary and carried portraits of other leaders like Ishwar Chandra Vidyasagar. She has decided to come out with the same tableau during the Republic Day parade on Red Road in Kolkata.

Tamil Nadu’s Stalin also proposes showcasing the rejected tableau in Chennai in the Republic Day parade and also taking it to other districts in Tamil Nadu.

It does not behove to follow petty politics. While it is truethat the sombre ceremony should not be disturbed by this kind of petty politics, one option could be to give a chance to all states. India is, after all, a Union of States. If there is a time constraint for some reason, the authorities could adopt the lottery system. The other option for the rejected states is to follow Mamata and Stalin to show off in the state R-Day celebrations.

The display of the unique culture of each state brought to Delhi parade with their floats and dances might create the sense of the new nation in the Union of States. It is time that the Centre and the states come together and evolve a good selection process without any heartburn.