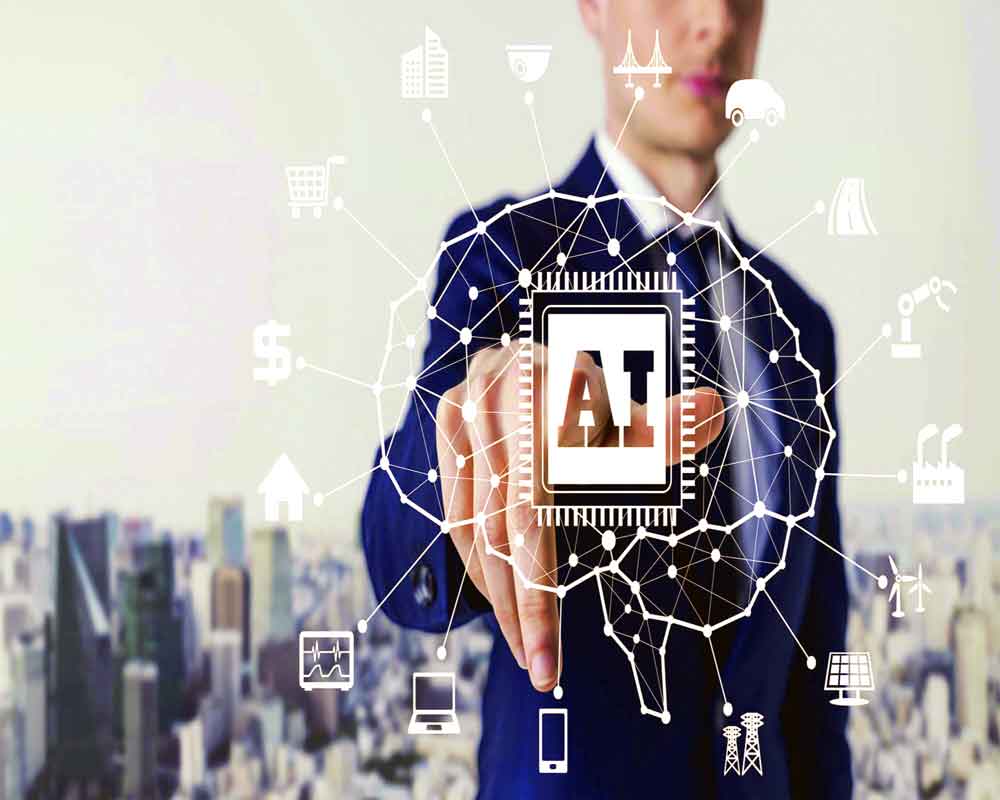 2022 will certainly be an exciting year for Artificial Intelligence with more funding, government incentivised research and tech companies accelerating growth in this space, writes Spriha Biswas

In a world where we are all becoming increasingly dependent on technology, it would be hard to think of any industry that is untouched by AI. Just as electricity transformed almost every single aspect of our lives a 100 years ago with its incredible capabilities and convenience, in a similar manner AI is now being embedded in our daily experiences. From unlocking your phone using facial recognition software to making recommendations for restaurants that will be close by based off what you like to eat! Even when you chat with a customer care chatbot, you are literally talking with AI. We have seen phenomenal development in this space within Machine Learning, Natural Language Processing, Knowledge Management, and Pattern Recognition in the last few years, bringing more predictability, efficiency, and growth in conventional industries such as banking, healthcare, data processing as well as new industries such as content distribution platforms. The surge and adoption of AI in industries are now becoming a norm and are going through explosive growth.

At the global average level of adoption and absorption implied by our simulation, AI has the potential to deliver additional global economic activity of around $13 trillion by 2030, or about 16 percent higher cumulative GDP compared with today. This amounts to 1.2 percent additional GDP growth per year. According to PwC’s ‘Global Artificial Intelligence Study: Exploiting the AI Revolution’ to make this a reality, there must be a broad and overarching strategic investment from various countries in different types of AI technology. Improvements in labor productivity will drive the initial GDP positive numbers as firms seek to “augment” the productivity of their labour force with AI technologies and to automate some tasks and roles. The study also shows that 45% of total economic gains by 2030 will come from product enhancements, stimulating consumer demand. This is because AI will drive greater product variety, with increased personalization, attractiveness, and affordability over time.

In 2021, we saw some interesting breakthroughs such as Open AI’s launch of DALL-E, a multimodal AI system that can generate images from text, the US Department of Homeland security using AI to recognise masked faces, Tesla’s claim to build an AI humanoid that can perform repetitive tasks, IBM’s AI service to assist with climate change analysis, DeepMind’s announcement of Player of Games — an AI that can perform both perfect information games (like Chess) and imperfect games (like Poker) and the most recent Facebook’s announcement of Metaverse – a multi-modal virtual reality universe. Certainly, this breadth and pace of development and breakthroughs in AI should be expected in 2022. Here are some key trends we will see in 2022:

The AI revolution is upon us, and it’s only just begun. We’re going to see an increasing demand for physical, manual labour as machines take over routine tasks that are now done by humans in industries such as healthcare or customer support; this will lead many people with those skill sets to have minimal employment opportunities because their job has been automated into software programs which can be accessed remotely through any device with internet access — no matter where you’re located! To stay competitive during these changing times workers in the years to come will need to constantly update their skills to work alongside machines in the new AI-driven workplace. Social, emotional, and higher cognitive skills such as creativity and critical thinking will become more relevant professional skills.

Last few years we have seen significant advancement in Speech Recognition, Natural Language Processing, and Speech Synthesis, where machines can understand and speak in human language. Large dataset language models such as GPT-3 by Open AI, (the most advanced and largest language model ever built) have shown the capability of AI in generating human-like speech. We are getting very close to a stage where bots can respond with human-like intelligence evident with their choice of words and prosody (the rhythm, stress, pitch of speaking based on context) According to recent reports, AI will save 8 billion USD per annum by 2022 for Customer Service Sector. Other industries where Voice AI will create a wave is Healthcare, where advanced diagnostics will become more accessible through AI. Today, Voice Biomarkers-based AI can detect Covid with 80% accuracy! Similar advancements will be seen in detecting other pulmonary diseases and mental health diseases such as depression, anxiety, and Alzheimer’s.

Over the last 2 years of the pandemic, we have seen a massive shift of purchases moving from offline to online stores which require massive feet on the ground. Hence there is a need to invest in the development and deployment of the next generation of delivery vehicles that are completely autonomous be it long-haul trucks or last-mile delivery vans. Motional, the $4 billion autonomous driving joint venture formed by automaker Hyundai and Aptiv, announced a partnership with Uber Technologies Inc to deliver Uber Eats food orders using self-driving vehicles. The service will kick off in early 2022 in Santa Monica, California.

Amazon has already started delivering packages with drones and testing autonomous vehicles on road. There is also a big data revolution in the automotive industry where these autonomous vehicles can gather tons of information about their passengers and surroundings, which can then be used for different purposes such as providing personalized services. The AI-powered automotive market is expected to grow up to 35 percent by 2026.

Metaverse is a virtual reality platform that uses speech API, computer vision, natural language understanding to simulate real-world environments and characters, where humans can operate in their life-like avatars and collaborate and communicate with each other. The end of 2021 saw major headlines from Facebook, Nvidia, and Amazon announcing their ventures into this future of digital space. With the pandemic-driven shift to a digital world, Metaverse is expected to see growth outside gaming and media. Microsoft for example is building a version for virtual team meetings. The fashion brand H&M launched a metaverse store. Metaverse this year will become more accessible to mainstream users, and we will see a lot more experiential movies, digital stores, social networks, and digital tourism frontiers open up.

While every industry is assessing how to leverage AI to enhance their business, there are proportionately very less people who understand the depths of this technology and how it can be used efficiently. There are even fewer people today who can develop AI-based solutions for their organizations. The talent gap is a real challenge that would lead to more organisations looking for low-code/no-code deployments for AI/ML solutions for quicker turnarounds. While the machine learning models will be developed by a handful of experts, the implementation and utilization will be opened for the masses.

With time, artificial intelligence (AI) will enter our lives in increasingly novel ways. This is not only true for professional applications, where technology already plays a major role in many fields of science and industry. What is often overlooked, however, is that intelligent machines not only find their way into individual situations or human-machine interaction contexts; increasingly also into very intimate settings, by predicting human decisions.

India has made rapid leaps in the AI space. Out of the 5000 AI patents filed over the last decade, 94% were from the last 5 years, out of which 60% of them originated in India. Computer Vision and NLP are the leading segments with 50% of AI patents. There has been a five-fold increase in VC funding of Indian AI funds from $200 million in 2015 to over $1 billion in 2019. While initial days we saw a wave of smart personal assistants (chatbots) in consumer electronics, today we see more complex use cases in IOT, Robotics, AR & VR being adopted at a wider scale. Our countries education institutes are also gearing up for to nurture talent in this space. At the beginning of 2022, IIT Madras incubated startup GUVI partnered with AICTE (All India Council of Technical Education) to offer free Python and AI courses online to 1 million kids from low-income groups and families

2022 will certainly be an exciting year for AI with more funding, government incentivised research and tech companies accelerating growth in this space. In the next decade, one hopes that additional curriculums are developed that teach Artificial Intelligence not just in engineering colleges, but that is also aimed at children at an elementary level from school just as we teach other subjects such as Physics, Chemistry and Math. There must be a concentrated effort towards this as in the next decade as the knowledge and skill in AI will become a must-have background for even non-software professionals. Having a conceptual understanding of AI and how it works will enable more people to contribute to its growth through new ideas and use cases.

As early as 2014, Researchers at the University of Glasgow were able to demonstrate how machines could understand our minds better than our partners as early as 2014! By merging existing technology with mind-reading apps to understand intent or thinking processes, autocorrect and speech recognition software will be able to achieve 100 percent accuracy.

Concerns concerning AI’s security will continue to be prevalent. There has been a surge in government interest in artificial intelligence and security, as well as legislative recommendations. Many of these policies, on the other hand, place a greater focus on plans to fund more AI research and train more people in this sector, which will ultimately boost economic growth and creativity through the development of AI technologies, rather than on AI security. The importance of transparency, testing, and accountability for algorithms and their developers has been emphasised by countries that have proposed or implemented security-focused AI policies, though few have gotten to the point of operationalizing these policies or figuring out how they would work in practise.

To protect people’s interests in this AI-driven environment, governance policies and cyber laws in India and globally as well must undergo major consideration and dramatic reform.