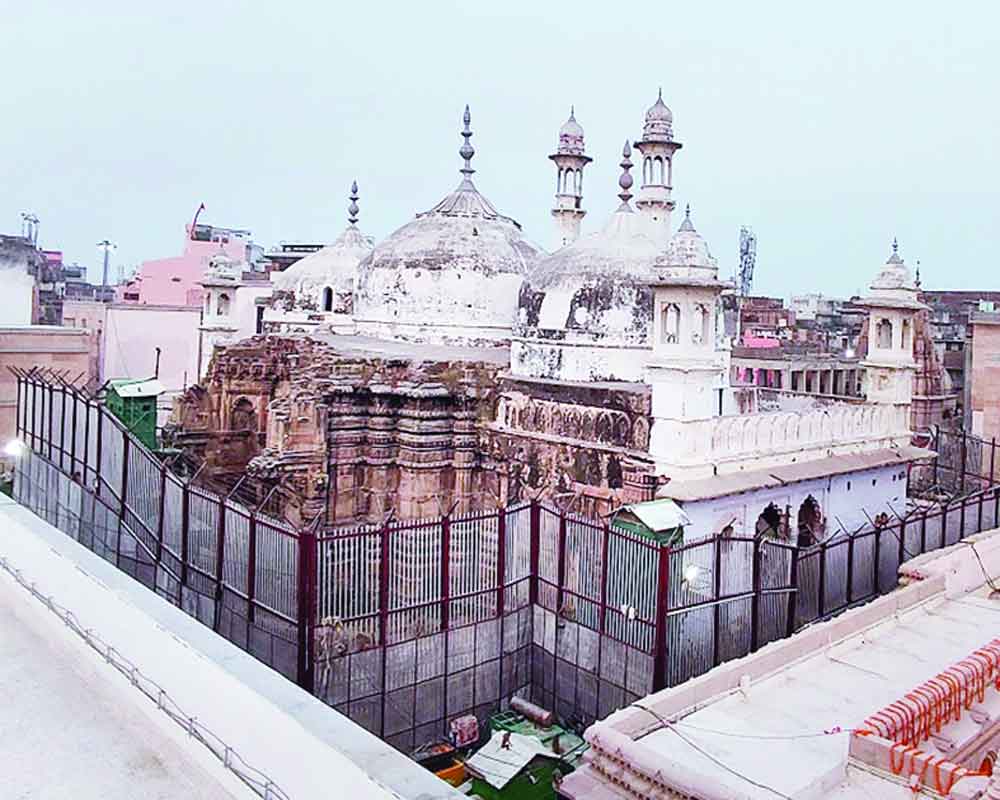 It may be the beginning of a prolonged judicial process that could unravel the murky medieval Indian history marked by demolitions of temples, atrocities, and killings, writes Shivji Sarkar

The surprise discovery of Shivalinga, supposedly the symbol of the Lord of creation and destruction, at the old temple of Lord Vishwanath or Gyanvapi mosque can have major political ramifications and help the saffron outfit in keeping the Hindutava pot boiling in the next round of assembly polls and 2024 Lok Sabha elections.

Would it make the Congress effort at Udaipur's Chintan Shivir futile and boost up the votary of Hindutva for a new stretch of political success? Much will depend on how Congress responded to the row and how it convinced the nation that BJP was raking up religious issues to divert attention from the burning issues of price rise and unemployment.  In any case, Gyanvapi controversy would firm up the religious thrust of Indian politics

For millions of devout believers, Varanasi is the city of Lord Shiva. Mythology is full of tales about Shiva visiting this city from his Himalayan home every year. Still, no one possibly expected that Lord Shiva would emerge from a grimy  ‘vaju’ tank  to energize his devotees.

The Gyanvapi controversy  re-ignites the issue that was supposed to have been settled with the judgment of the Ramjanmabhoomi temple by the Supreme Court. The five Supreme Court judges took note of the Places of Worship (Special Provisions) Act of 1991 that laid down that all shrines will be preserved as inherited by independent India on 15 August 1947. The law made an exception for Ayodhya as it was already an ongoing dispute. Nothing else was deserving of an exception, nor was it legally or constitutionally possible, the judges wrote.

The quick scenario change in the Gyan Vapi incident may raise the question of the validity of the enactment of the Places of Worship law by the Narasimha Rao government. Sentiments are high not only in Varanasi but all over. Seeming non-partisan people like PK Roy, former executive director, Airports Authority of India in Kolkata; Lalima Aneja Dang, a senior radio producer; Priyadarshi Dutt, author, commentator; former editor of Doordarshan Prabhat Dabral are all charged and advising that it is prudent to settle and not react on this emotive issue. Former Vice-Chancellor of Nagpur University SN Pathan and another Vice Chancellor Firoz Bakht Ahmed have appealed to the minorities to correct the steps and maintain harmony. Left-leaning Dabral says minorities must dispassionately judge the acts of despots like Aurangzeb and peacefully sort it out the issue in the best interest of the nation.

The one common question the non-political elite ask is how could someone treat the revered Shivlinga with such contempt that they established the wash-tank above that. It is difficult to say whether it would have the same manifestation and feelings till elections or not. The sentiments expressed speak in volumes of the hurt feelings.

The nation may recall that since 1949, the Babri structure in all purposes was the Ram temple. Emotive issues are not forgotten. That led to the demolition of the structure in 1992. The way now the GyanVapi is flaring up indicates that the issue of demolition by Aurangzeb on Sept 2, 1669, can widely impact the course of Indian politics. The Hindutva-oriented parties would find it easy to exploit the sentiments to woo the voters. The rest could go on screaming about price rise and divisive politics, or take up other equally emotive issues to remain relevant and vibrant.

It may start with Hyderabad’s Bhagyalakshmi temple. The TRS of Chief Minister K Chandrasekhar Rao may have to take a stand on the crucial Bhagyalakshmi temple in the Charminar complex. Rao facing a pincer attack by Congress leader Rahul Gandhi and Home Minister Amit Shah, KCR  may have to stir with deftness. The others and even MIM may pitch in to make the Telangana assembly elections interesting.

It has to be interesting to see whether Gujarat rakes up the Bhadrakali and Rudra Mahalaya issues and Madhya Pradesh ignites Vidisha and Bojshala. If the BJp raised these issues in MP and Gujarat, the opposition may have to wait and watch silently fearing backlash from Hindus.

Alok Kumar, president of VHP, an eminent lawyer, is categorical, “There has been no change in the status of the religious structure since 1947, and Hindus have always performed puja at the site.”

Calling it GyanVapi Mandir. VHP national spokesperson Vinod Bansal said the faces of those who were trying to "hide the truth" have been "painted black" with the "finding".

In the BJP only Sangeet Som has threatened a replay of the 1992 'Babri demolition. But the BJP is happy with the Varanasi court developments giving it time, to extend the restrictions at the Gyan Vapi. They being the rulers in UP are acting with caution so that the gains are long-term.. Chief Minister Yogi Aditynath is personally observing each of the developments.

The Gyan Vapi will decide the religious fervor of Indian politics. The parties not aligned with BJP’s view have the challenge to tailor new strategies. The minorities are in dilemma. They are not keen on sailing with it or giving up but the voices within are advising not to get into another confrontation and solve it prudently.

Howsoever, it develops it would keep the Indian politics warm and parties would have to stir cautiously to chart their way to 2024 Lok Sabha and many assembly elections before that. The churning continues and the nation hopes that solution would emerge for a prosperous, peaceful nation.

The writer is a senior journalist and views expressed are personal.