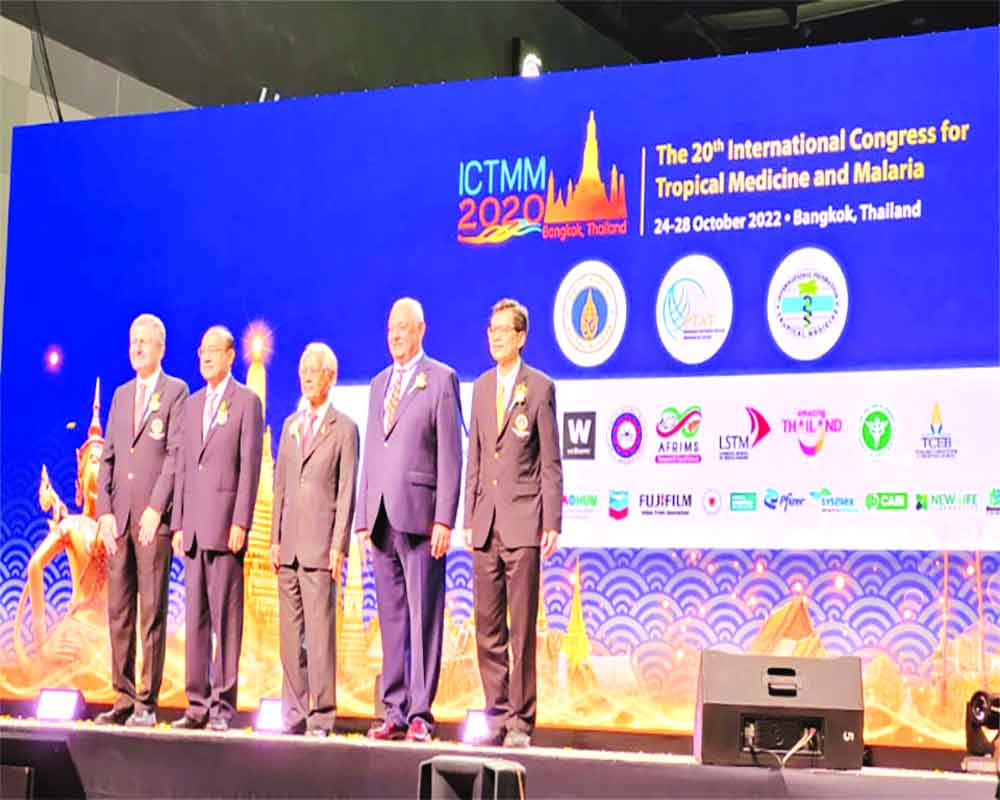 Neglected Tropical Diseases (NTDs) like Lymphatic Filariasis, Dengue, and Malaria affect one in five people in the world. Globally, the number stands at a staggering 1.7 billion, mostly from the poorest communities. Given the severity of the problem, experts from the world over converged at the five-day 20th International Congress for Tropical Medicine and Malaria (ICTMM), 2020, in Bangkok to discuss threadbare the issue at hand. ARCHANA JYOTI, who covered the event, reports.

The ICTMM event (October 24-28) saw the attendance of around 1000 participants from 60 countries, an indicator of their commitment towards helping end the NTDs scourge. The underlining call was for higher investment in Research and Development (R&D) to bring in new vaccines and drugs in the sector.

Hosted by the Parasitology and Tropical Medicine Association and Faculty of Tropical Medicine, Mahidol University, Thailand,  the mega event at the Bangkok International Trade & Exhibition Centre (BITEC) was declared opened by Dr Yongyuth Yuthawong, Thailand’s Deputy Prime Minister and the former Minister of Science and Technology. It was themed ‘Stamping out Tropical Diseases: The Countdown Begins.’

The participants also focused on opportunities in the post-Covid-19 scenario and the need for more investment in the R&D arena to tackle the neglected diseases caused by vectors like mosquitoes which are rearing their ugly heads helped by climate change-induced surging temperatures.

NTDs are a group of diseases affecting the poorest and most vulnerable, causing permanent disabilities, and impacting mental and emotional health and well-being.

Formally welcoming all the attendees, Associate Prof Pratap Singhasivanon, Chairman and Secretary, ICTMM2020, highlighted the need to improve the current preventive measures and treatment regimen. One out of 5 people is suffering with NTDs worldwide.

Later, talking to reporters from South-East Asia attending the conference, Singhasivanon stressed higher investment in the healthcare sector, pointing out that of all the neglected diseases, Dengue is the most neglected one, despite its high rate of infections.

Up to 50-100 million infections are now estimated to occur annually in over 100 endemic countries, putting almost half of the world’s population at risk.

“The vector-borne mosquito is highly adaptable. It is predicted that the rise in Earth's temperature, linked to climate change, will fasten viral amplification of the disease. In fact, the mosquito is spreading its wings now even in the USA, European, and many other countries. More people are likely to come into its grip,” he said in the backdrop of reports of recent Dengue cases emerging from France.

On the sidelines of the event, Kavita Singh, Director, Drugs for Neglected Diseases initiative ( DNDi) South Asia, shared the status of Dengue in India with The Pioneer.  In India too, the situation is grim. Last year, India reported 1,64,103 cases of Dengue,  she said, adding that every year, hundreds of people die due to this mosquito infection in the country.

“As there is no specific treatment that can prevent the progression of the infection to severe Dengue, it is critical to find therapeutic solutions to this climate-sensitive disease that spreads at a rapid pace," she said. The DNDi has developed and registered twelve new treatments for neglected diseases such as sleeping sickness, visceral leishmaniasis, Chagas, and pediatric HIV since 2003.

Prof Dr Prasit Watanapa, former Dean and Consultant at the Faculty of Medicine Siriraj Hospital, Mahidol University, which is working with global bodies to tackle NTDs, especially Dengue fever, echoed similar sentiments. He lamented that NTDs are largely ignored by mainstream medical science because they do not represent clear viable commercial markets for the private sector. “This continues to hinder the progress in medical research and development, and therapeutic solutions.”

Filaria disease head (DNDi) Dr Sabine Specht talked about drug development in the Filarial sector. “New drugs enabling reversal of lymphoedema would be highly beneficial. This has also become imperative in view of SDG goal 3.8, which targets individual well-being and thus calls for an individual cure and not merely epidemiological “control as a public health problem,” she said.

The second generation of Covid 19 vaccine Dengue vaccines as well as novel drug development was also discussed at the Congress. Another focus was on the discussion on Malaria elimination in Thailand by 2029.

The ICTMM brings together every four years thousands of researchers, and experts, like vaccinologists, social scientists, tropical medicine infectious diseases, and policymakers in the field of tropical medicine and Malaria. The next ICTMM will be held in Malaysia in 2024.