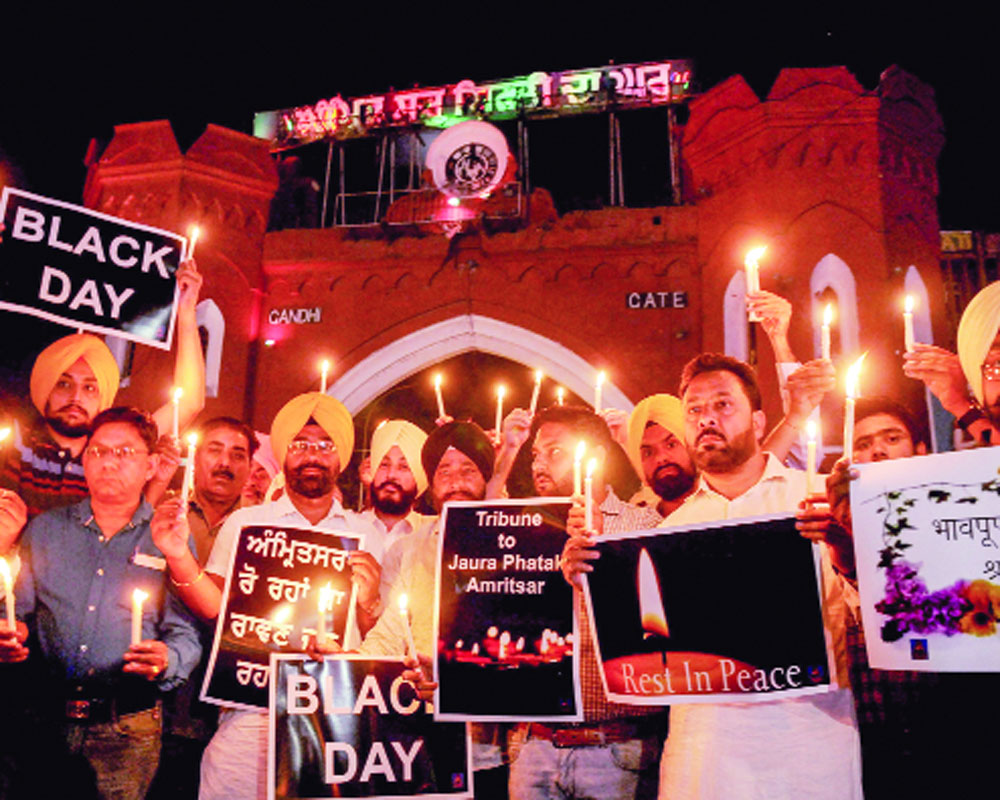 We can turn blue in the face discussing the importance of the rule of law but more than its imposition, isn’t it the responsibility of every citizen to follow the law, both in letter and spirit?

The ghastly and completely uncalled for tragedy that overtook Amritsar the other day calls for deep introspection and something that has been completely absent from our national discourse, honesty. The magisterial inquiry that has been ordered will only look at the bureaucratic aspects of the incident and pinpoint responsibility for the lapses that led to the horrific loss of 60 lives and injured a hundred more if Government reports are to be trusted.

It is hardly likely to look at the human aspect of this calamity or lay the blame on where it truly should, our chalta hai culture that seems to have permeated the very poison we breathe, becoming firmly rooted in our DNA, and impacting every aspect of our lives.

Let us be honest, this public mourning and the self-flagellation we indulge in means absolutely nothing and is just plain hypocrisy playing out in slow motion. Nothing will change, soon enough, the media will focus on some other appalling news, politicians will pay lip-service, the public will forget and all of us will go back to our own dreary existence as if it never ever happened.

It is only a matter of time before this issue is reduced to a political blame-game with each party doing its damnedest to sway public opinion in its own favour. Off course, some politicians and bureaucrats will pay the price, not least Punjab Minister Navjot Singh Sidhu and his wife, whose aspirations for high office will be held hostage by this tragedy for the rest of their political career, just as the Chappaquiddick incident put paid to Senator Ted Kennedy’s hopes of winning the Presidency, not that many will care.

The fact of the matter is that the real tragedy for which we will continue to pay an appalling price in the future is our inability to face up to the stark reality of what ails our society and the nation. In all the coverage of this horrendous incident not once has there been any mention of individual responsibility.

Except, that is, by the Railways, which has stood firm, at least for now, and has refused to undertake any inquiry against its own officials, claiming that the revellers were trespassers on railway property, a stand that has come under intense criticism from many quarters.

We can turn blue in the face discussing the importance of the rule of law in society, but more than its imposition, isn’t it the responsibility of every citizen to follow the law, both in letter and spirit?  The plain fact is that this incident is not an isolated one. We are witness to such behaviour on a daily basis as individuals and groups flagrantly violate laws, be it with regard to civic regulations, traffic rules or a myriad of other issues with absolutely no fear of being held accountable.

It is indeed ironic that an individual, willing to commit a criminal act endangering lives to witness the victory of good over evil, as these spectators were, will not break a single rule when travelling abroad for fear of being held accountable. Clearly, it is not a case of ignorance or even carelessness but a blatant disregard for the common good that separates us from more developed societies.

Why are we afraid to clearly state that each and every individual who was standing on the tracks was committing a criminal act and must have been fully cognizant of what the consequences of such stupidity could be, and in this particular case, tragically it was.

By using law-abiding taxpayers’ money to dole out compensation to the next of kin and those injured in the State, showing compassion and humanity or condoning criminal behaviour?  how can society ever progress if we are going to continually cater to the basest instincts of the mob, even if it is for votes?

This is not a question of political correctness but of holding individuals responsible. Common good requires common effort and nobody is exempt.

Maybe, this dreadful incident is showing us the way towards a more empathetic, equitable and just society which requires accountability to be treated as inviolable. It is time we stood up for our higher selves.

(The writer is a military veteran, a Consultant with the Observer Research Foundation and Visiting Senior Fellow with The Peninsula Foundation, Chennai)