Standing in defence of our soldiers

Standing in defence of our soldiers 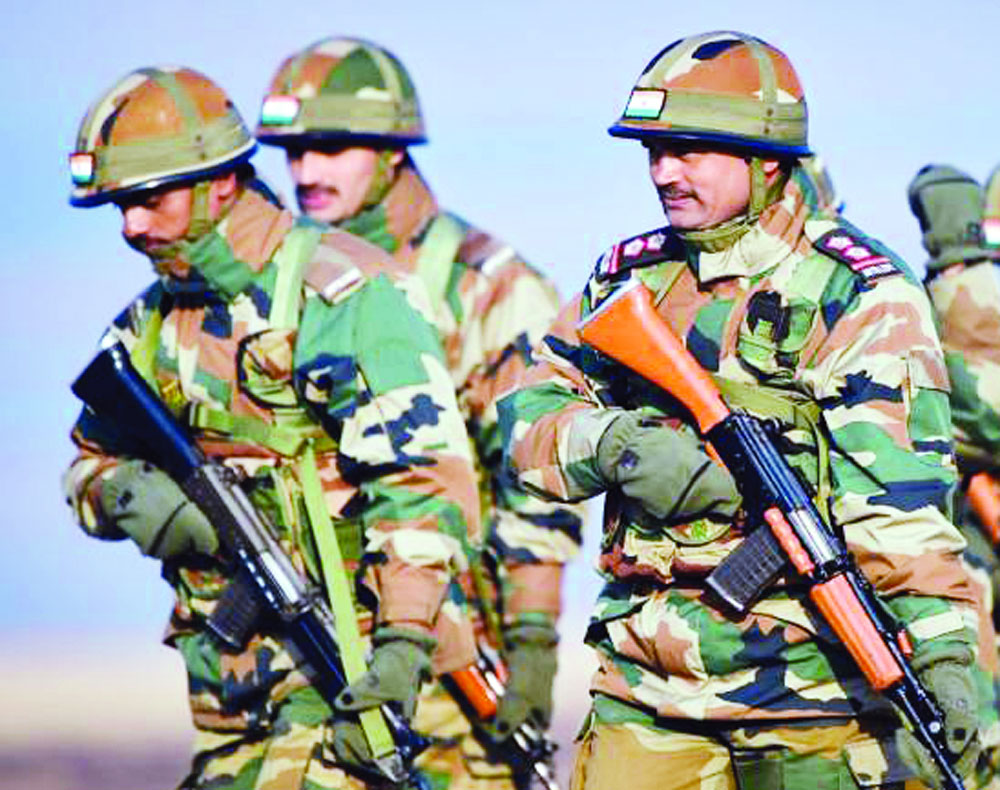 While India can claim credit for surgical strikes and other operations, the fact is that the defence services do what they are supposed to do without grumbling. Government must ensure their faith remains intact

Data and the tax department don’t lie, to paraphrase a saying. IndiaSpend is the torchbearer of new journalism. It specialises in data-crunching, rather than relying on vague, perception-based analysis. In a report about a new study, it backs up with data what we always knew but could not prove. The Azim Premji University and Lokniti (the Centre for the Study of Developing Societies or CSDS) in 2018, conducted a study covering eight States to map trust in institutions. The study covered 22 Assembly constituencies with more than 16,000 respondents. It revealed that nearly 77 per cent respondents showed the most trust in the military, followed by 54.8 per cent in the Supreme Court and 48 per cent in the High Courts.

On an average, elected offices and institutions, such as the President, Prime Minister, Chief Minister, Parliament, State Legislature, et al, enjoyed an “effective trust” of 40 per cent. Effective trust is the difference between percentage of respondents who opted for a “great deal of trust” at one end of the scale and “no trust at all” at the other. According to the study, political parties garnered low trust, at minus 1.75 per cent. Political parties polled the lowest in the list of 16. The average “effective trust” in Parliament was 36.6 per cent in the eight States surveyed. Government officials scored 4.8 per cent trust while the police managed only 0.9 percentage points more.

Why do you think this is? It could be because the military in India has proved time and again to be free of political influence, unlike the police, administration and other institutions. The study suggests the Indian people believe the effect of political parties is toxic (reflected in the low ranking to political parties) and, therefore, they trust the courts more than the Prime Minister and Parliament. The military does not hide or lie to cover up unpleasant realities — although sometimes, it might highlight certain parts of truth: Like what a wonderful aircraft the Rafale is (true) and that India could never have made such a wonderful aircraft (false).

The main thing is, the military does what it is supposed to do without grumbling or complaining (although its Chiefs do occasionally go to court about their personal problems — and are quickly absorbed by political parties). It is often weighed down by crippling shortages, but it gets the job done, no matter what the difficulties, even though it doesn’t get paid enough in relation to the other arms of the Government, tends to be bossed over by them, and is frequently denied state-of-the-art equipment.

It is true that no Army in the world has a full inventory — it is a mix of modern, mature and legacy/obsolete equipment. In 1995, Army Chief Gen Shankar Roy Choudhury was fed up writing letters to his superiors about critical deficiencies and was forced to go public. “The Army should not be held responsible for failing to meet its mandate.” In the same period, Chief of Naval Staff, Admiral VS Shekhawat, concerned about the shrinking size of the Indian Navy, warned over dangers at sea in the event of hostilities. His outburst resulted in the then Defence Minister Mulayam Singh Yadav calling him to a breakfast meeting and immediately placing orders on Naval Dockyards for ship construction. In France this year, the Chief of Defence Staff (CDS) resigned because of arbitrary reduction in the defence budget. By this yardstick, many of our service chiefs ought to have resigned. Last year, the defence budget was lowest since 1962.

One is periodically reminded that China has risen, while India is still rising and no one will come to India’s help in the event of conflict. India will have to fight its battles alone. But is it equipped to do so? A strategic reset is essential to meet the emerging security challenges. Of the 340 recommendations by the Kargil GoM, many are unimplemented, including the appointment of CDS. A headless Integrated Defence Staff (IDS) created more than a decade ago is an exercise in futility. Integration of the three services with the Ministry of Defence (MoD) has not even begun while jointness is only in name. Defence planning on the basis of 15, five and one year plans is compartmentalised and offers no strategic choices. The IDS simply collates the three services’ plans and lets the MoD determine priorities.

The service chiefs have consistently complained about inadequate say in decision-making. The military is seen to be subservient to the political class and civilian bureaucracy. Speaking at a public lecture some years ago, the then Comptroller and Auditor General of India (CAG) Vinod Rai urged the Government to repose trust in the Armed Forces by giving full financial powers to the service chiefs. He said the Defence Procurement Policy (DPP) (which has undergone seven upgrades and become very complex) involved the participation of 13 agencies.

The ghost of Bofors is a B, (you could add an R for Rafale) plus the three Cs — CAG, CVC and CBI — these are retarding the procurement process. Are we surprised that the Army has not added a single new gun to its inventory since 1986 when it is required to deter a two-front war? Transformation of the Army — like the Navy and the Indian Air Force (IAF) — is underway independent of a tri-service operational plan. There is no long-term Strategic Defence and Security Review (SDSR) to derive national security and defence strategies and then evolve doctrines. We have put the cart before the horse.

During the limited war in Kargil, Army Chief Gen Ved Malik despairingly announced: “We will fight with what we have.” But for Israel’s strategic intervention with 155 mm Bofors ammunition, UAVs and PGMs for the IAF, vacation of Pakistan’s aggression would have met cost, time and casualty overruns. Fast-tracked acquisitions arrived only after the war was over. One of the reasons for Operation Parakram not taking off was the discovery that the military was not combat ready, probably an alibi for lack of political will which got translated as strategic restraint. Not fighting a war since 1971 and acquisition of nuclear weapons have willy nilly undermined the conventional deterrence.

We can feel good about surgical strikes and claim credit for such piecemeal operations in elections. But remember: The faith of the people of India resides in the defence services, because like the people of India, the services make do with what they have; and do a damn good job in it. That faith, Governments must ensure never breaks.