Getting a grip of Kashmir’s problem

Getting a grip of Kashmir’s problem 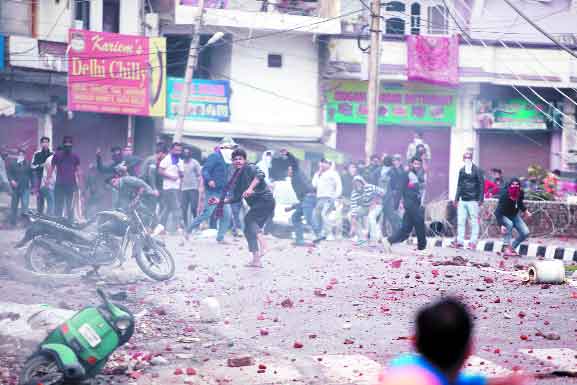 At the root of the crisis is the radicalisation and alienation of the youth, who find it difficult to be hopeful about their lives and focus on their dreams. It is up to the Government to take immediate steps to calm down sentiments and mainstream them

While neighbouring Pakistan needs to be taught a lesson for sponsoring terrorist attacks in Kashmir, the need is to also address the Kashmir problem internally. There can be no doubt that there are many things that need attention, including the radicalisation of the youth in the State. It was indeed disheartening to hear that it was a local young suicide bomber who caused the Pulwama attacks. It needs to be probed further as to why misguided youths are getting increasingly attracted towards militancy and terrorism.

For quite some time now, there have been intense debates on whether a sizeable number of educated youths are joining militant ranks in some parts of south and north Kashmir or not. Former Union Minister Yashwant Sinha was right when he noted that radicalisation is happenning not because of one reason but due to a combination of things. This includes the role of Pakistan, Wahabism and Islamic fundamentalism.

Alienation and disempowerment among Kashmiri youth is yet another factor as also proxy war from Pakistani side for the youth to get recruited by militant organisations like the Jaish-e-Mohammad (JeM). Further, Inter-Services Intelligence (ISI)-sponsored propaganda and intolerant religious and ideological narratives have played an instrumental role in eroding the ideals of Kashmiriyat and has gradually taken them towards jihadist culture.

As Chief of Army Staff General Bikram Singh noted in a recent article that compared to 131 youth, who joined various terrorist outfits in 2017, the number rose to over 200 in 2018. Some new terrorist outfits, such as the Islamic State Jammu and Kashmir and Ansar Ghazwat-ul-Hind aligned to the Islamic State (IS) and Al Qaeda ideologies have also marked increased presence in the last few years. Experts point out that these are children from conflict zones, who have seen guns and rifles on the streets when they were growing up. These children missed their childhood and saw only violence and conflict, which robbed them off their childhood.

Second, it is the lack of educational opportunities in the State that is alienating the youth.

Third, the youth do not find adequate jobs. Former Research and Analysis Wing (R&AW) chief, AS Daulat, feels that the youth are getting radicalised because they feel that they have no hope. The Jamaat-e-Islami is going about systematically filling this vacuum. They also enjoyed support from the People’s Democratic Party (PDP), which won the elections with support from the Jamaat. Now, there is huge disillusionment in the Jamaat over PDP. Social media was one of the major tools used by militants to propagate their ideology and to corrupt young minds of the Kashmir Valley.

The only way to reverse this trend is to bring them round. There is an imperative need to look inwards and correct things as even now, it is not too late. The fact that a Kashmiri kid decided to be a suicide bomber in Pulwama is an answer from the youth of the State to the flawed policy of gun in Kashmir. The young boy was one of those who felt he had no hope left in Kashmir. His father is a farmer and the boy was shot in the leg some time back perhaps for pelting stones on the streets. So, he decided to blow himself up. This attack shows the extent of extreme alienation of the youth.

The counter-narrative is the immediate requirement. The Government as well as political parties must address this on a priority. Kashmir Governor Satya Pal Malik told this writer that after six in the evening, there is no activity in the villages. To address this problem the Governor has started the screening of cinema and radio shows as also some sports activities for the young to keep them occupied. It is a welcome step that the Governor has already set up some groups for a counter-narrative and is also in talks with the maulvis to get them on board so as to tackle  fundamentalism. Governor Malik feels that mainstream politicians are not taking the responsibility. Hardcore radicals are not many and he had told the forces to address the problem of home-grown radicalisation. He is worried that the youth are now using ‘Jannat me jaane ka hai’ language.

The immediate thing is to set our own house in order. More guns are not the answer. Something else needs to be done. Kashmir experts like Daulat feel radicalisation could be reversed if proper measures are taken. As a first step, the Centre can talk to State leaders like National Conference president Farooq Abdullah, former Chief Minister of Jammu & Kashmir Omar Abdullah, PDP chief Mehboobha Mufti and even the Hurriyat. One really cannot talk to the suicide bombers.

The next step should be the installation of a popular Government as a democratic Government. This will be the real answer to settle things in the State and not Governor’s rule.

Above all, there is an immediate need to calm down sentiments and bring back normalcy in the State. Confidence-building measures and not bashing up of Kashmiri boys and girls in Chandigarh or elsewhere should be the answer. Bashing would further alienate the youth. This would have further reaction in the State. In short, what is needed is a steady and long-term Kashmir policy.