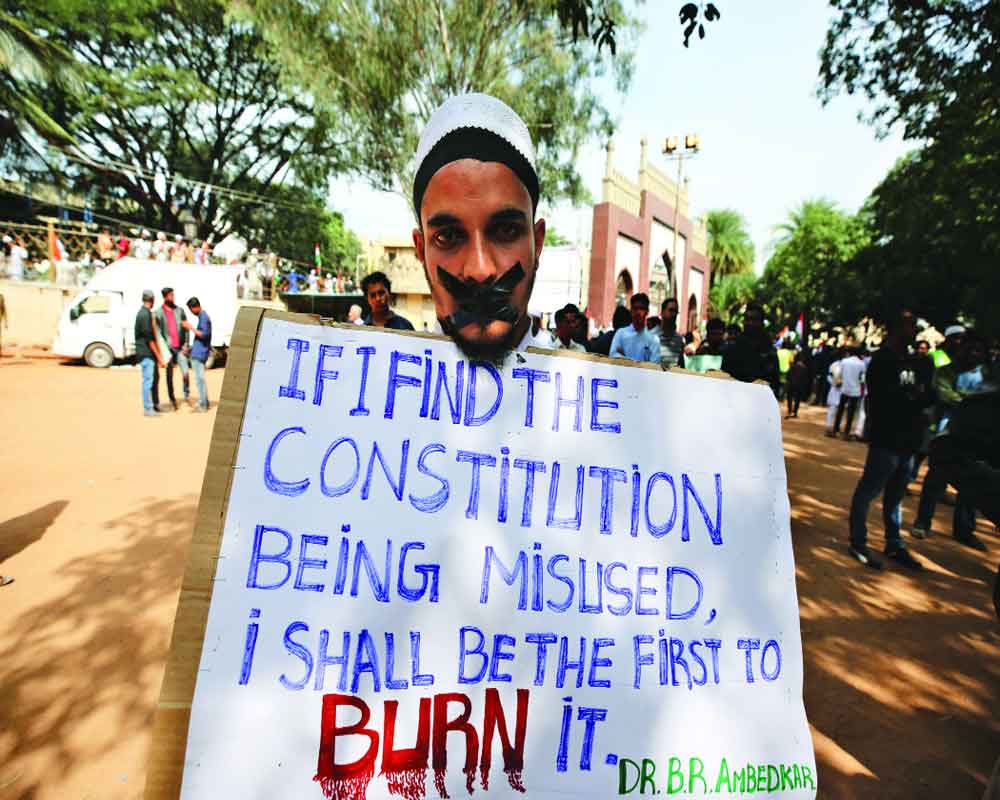 There’s a need to delink CAA from NRC that is being used to propagate a nationwide hunt to weed out one community. The Centre must clarify that it is going by continuity of past regimes

The demonstrations in several cities since the passage of the Citizenship Amendment Act (CAA) are highly coordinated, with agitators connected to groups in different parts of the same city, having transport for rapid movement from one spot to another, given contact numbers to access eminent lawyers, taught to access offline communication during internet shutdowns and armed with protest tools. Their slogans are fairly uniform, political parties and groups behind them are the same and now, an eminent E-zine has issued an “advisory” for politically correct coverage of the rallies.

With violence exceeding one week (and likely to continue after a Christmas break), there is an urgent need to delink the CAA from the non-existent National Register of Citizens (NRC) that is being misused to propagate a nationwide hunt to weed out one community. The Centre should, therefore, state that it is continuing former Union Home Minister P Chidambaram’s National Population Register (NPR), for which enrolment began alongside Aadhaar in 2010. (This writer was enrolled vide form number 02046115, household block no. 0021, household number 128). The rules framed then should be made public and amendments invited.

The CAA logically follows the defanging of Article 370 of the Constitution and scrapping of a State subject. Hence, the need for a law to provide citizenship to Hindu refugees, who came to Jammu & Kashmir in 1947, unaware that the then Prime Minister Jawaharlal Nehru was busy overthrowing the benign king and creating a veritable hell for non-Muslims in Jammu, Kashmir and Ladakh. It made sense to cover all persecuted minorities from Pakistan, Bangladesh and Afghanistan — all of which are Islamic Republics.

Afghanistan had a sizeable Sikh and Hindu population under the kingdom of Maharaja Ranjit Singh; it slowly migrated to India, especially after the assassination of former Presidents Mohammed Daoud Khan  (1978) and Mohammad Najibullah (1996), and the rise of the Pakistan-backed Taliban. Hence, Afghan minorities deserve the same consideration as those from Pakistan and Bangladesh.

As Union Home Minister Amit Shah stated in Parliament (December 9 and 11), the Nehru-Liaquat Pact of 1950 failed abysmally to protect minorities in Pakistan. Its first Law Minister, Jogendra Nath Mandal, who helped the Muslim League wrest Sylhet from Assam, fled to West Bengal the same year. Similarly, the Christian community that worked actively for Pakistan, fared poorly in the Islamic Republic and has been included in the ambit of the new Act. Muslims are free to seek citizenship on individual basis under existing laws (given to 2,830 from Pakistan, 912 from Afghanistan and 172 from Bangladesh in the last six years).

Thereafter, the interim Parliament passed the Immigrants (Expulsion from Assam) Act, 1950, to enable the Central Government to remove outsiders whose “stay in Assam is detrimental to the interests of the general public of India or of any section thereof or of any Scheduled Tribe in Assam.” Hindu refugees were exempted. However, as the North-eastern States expressed anxieties, special provisions were invoked to protect their social and linguistic uniqueness. The refugees in Bengal are mainly Matua (Namashudra), who kept the communists in power for nearly three decades and then ensured the Trinamool Congress’ victory. Before independence, Mahatma Gandhi (Delhi prayer meeting, July 16, 1947) said if minorities were unable to live in Pakistan, “the duty of the adjoining province on this side of the border will be to accept them with both arms and extend to them all legitimate opportunities.”

In a letter to Sri Krishna Das (July 21, 1947), he said, “The poor Hindus, who will migrate owing to oppression, will certainly be accommodated in India.” On November 5, 1950, Jawaharlal Nehru assured the Parliament, “There is no doubt, of course, that those displaced persons, who have come to settle in India, are bound to have the citizenship. If the law is inadequate in this respect, the law should be changed.” Sardar Vallabhbhai Patel promised vigilance for the welfare of the minorities in Pakistan.

In March 1964, the then Union Home Minister Gulzarilal Nanda said if the honour and lives of Hindus are not safe, “the door has to be kept open…”, a sentiment echoed by Communist Party of India (CPI) MP Bhupesh Gupta. After the emergence of Bangladesh, CPI(M) leader Gautam Deb observed that religious persecution of Hindus continued after the assassination of Mujibur Rahman.

On April 20, 2010, former Assam Chief Minister Tarun Gogoi urged the then Prime Minister Manmohan Singh to grant citizenship to those who fled religious persecution at Partition. CPI(M) MP Basudeb Acharia (Lok Sabha, April 25, 2012) demanded amendment of the citizenship Act to grant citizenship to Bengali refugees, who migrated even before the Indira-Mujib agreement. He was supported by PL Punia and Khagen Das in the Lok Sabha and Shyamal Chakraborty and Prasanta Chatterjee in the Rajya Sabha. The 20th Congress of the CPI(M) passed a resolution, demanding rights for Bengali refugees (April 2012).

In 2003, the Atal Bihari Vajpayee Government gave special powers to some border districts of Rajasthan and Gujarat to grant citizenship to Hindu and Sikh refugees from Pakistan and Bangladesh. Manmohan Singh urged a more liberal approach towards refugees after Partition. In June 2012, CPI(M) general secretary Prakash Karat wrote to Singh about the plight of Bengali refugees: “Their situation is different from those who have come to India due to economic reasons.” Karat said lakhs of families from Scheduled Caste communities like Namashudra, Pondra Khatriya, Majhi were affected.

Finally, there is no “right to infiltrate.” Every nation protects its borders, distinguishes between refugees and intruders and makes laws to confer citizenship on foreigners. When Jews came to Kerala after the destruction of the Temple of Solomon (70 AD), descendants of the Prophet to Sindh after Karbala (680 AD), Parsis to Sanjan (8th century), all sought permission from local rulers. Post-1947, Tibetans, Baha’i and others were given refuge. But sneaking into the country and acquiring voter and ration cards by stealth is neither legal nor acceptable.