The sticky road ahead

The sticky road ahead 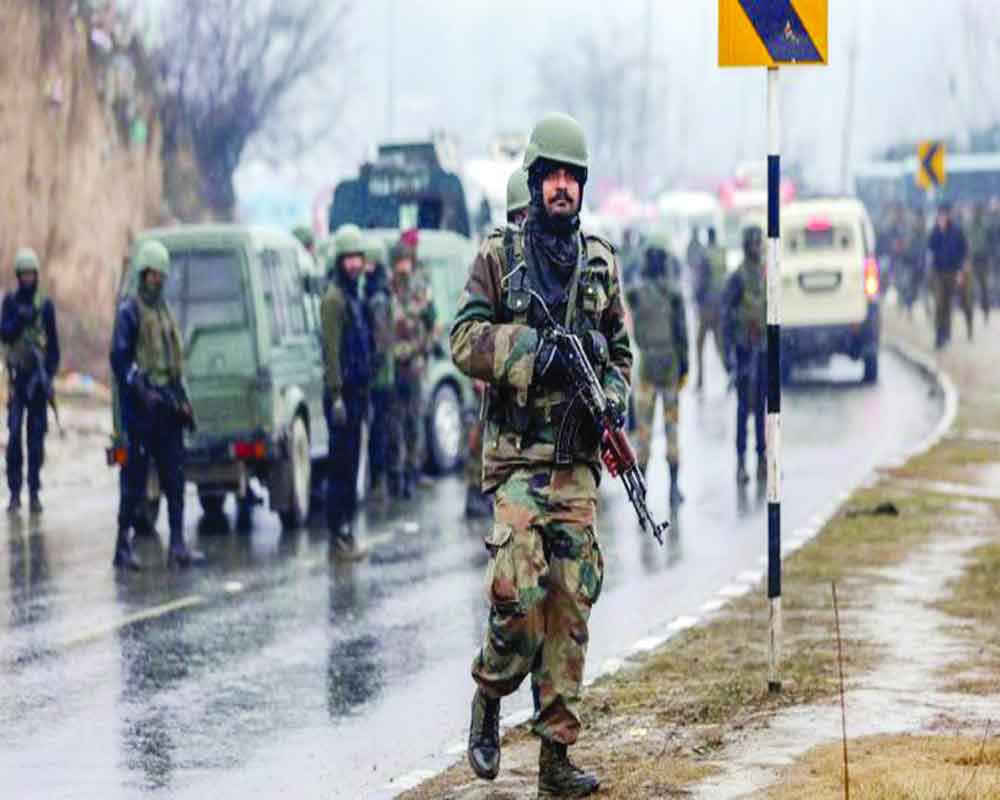 The Pulwama tragedy calls for a well-calibrated, multi-pronged action plan that has a fine blend of protecting India’s sovereignty, democratic norms and diplomacy with minimum use of force

The situation in Kashmir has become frighteningly dangerous. The seeds of terrorism and radicalisation sown in the 1980s under the nasty craftsmanship of Gen Zia-ul Haq has started bearing fruit. Over the years, the ground situation has changed drastically from domination by foreign terrorists to home-grown ones; with the masters comfortably remote-controlling the situation from Pakistan and providing funds, arms and ammunition, alongside subversion, propaganda and political rhetoric. The very fabric of Kashmiriyat and national integration is getting mauled.

On February 14, in Pulwama, a 21-year-old local Kashmiri executed the deadliest terror attack ever by ramming a 350 kg explosive-laden SUV into a Central Reserve Police Force (CRPF) convoy that killed 41 soldiers and critically injured many. For India, the incident is not only painful but highly shameful. Besides the loss of valiant soldiers, the precise execution, that too by local terrorists, is a cause of concern. As in the case of a number of previous terror attacks like 26/11, Samba, Sunjwan,  Parliament, Pathankot and Uri among others, there is immense outcry within all segments of society, with pledges of teaching Pakistan a lesson, surgical strikes II, air strafing and an all-out war doing the rounds.

Going by past experiences, all such actions could well just be rhetoric and the pain will soon be forgotten with the passage of time. Seeing the intensity of the prevalent situation wherein even local Kashmiri women are coming out on the streets, resisting the security forces by throwing stones and chappals at them and mothers motivating and proudly complimenting their sons for martyrdom, there are distinct signs of the situation deteriorating further and Kashmir gradually slipping out of Indian sovereignty.

It is time for a productive, meaningful and discernible action as India is faced with a ‘now or never’ situation, else we may be viewed as a week-kneed nation. Let’s put our heads together for a comprehensive, well-calibrated and multi-pronged action plan with a fine blending of protection of sovereignty, democratic norms, polity, diplomacy (including military diplomacy), use of minimum force and roll it out in the quickest time-frame. The suggested course can be dictated by the following salient aspects.

First, security forces must go all out to eliminate/apprehend the planners, over ground workers, perpetrators and operators (terrorists) while keeping sensitivities of local population in mind. The Line of Control should be virtually sealed to obviate movement of terrorists, arms/ammunition and other material. Major trouble-spots need to be thoroughly sanitised and isolated in a professional manner with minimum use of force. It needs to be appreciated that while 85 per cent of the area and population of Jammu & Kashmir is by and large peaceful, it is these hotspots, comprising 15 per cent of the population, that need to be suitably addressed.

No more leniency should be shown to anti-national elements who display outright treason by raising Inter-Services Intelligence or Pakistani flags, shout anti-India slogans, misguide the local youth and yet enjoy the Indian hospitality — in particular the separatists, who benefit from the Indian taxpayers’ money and sing the song of azaadi and Pakistan. High-end security and other privileges provided to the separatists should be immediately withdrawn, notwithstanding earlier apprehensions that they may be bumped off by Pakistan and the blame may be shifted on India as it has happened in some cases earlier.

The Government has already initiated action and it is welcome. It also sounds ridiculous that Pakistan’s Foreign Minister spoke to separatist leaders; or the latter visited the Pakistan High Commission in Delhi. Rather than blaming Pakistan for all this, which always attempts such nefarious activities, why doesn’t the state snap the very possibility of such communications? Nowhere in the world such anti-national activities are acceptable; democratic liberties should only be accessible to those who deserve it.

Second, let professionals do their job. They must be kept in the decision-making process at all levels. Yes, the Indian Army is one of the most professional Armies in the world, which knows how to do the job and it does it well, keeping all aspects of humanity, good faith, use of minimum force and draws a fine balance between force and civic action. Rather than questioning or punishing soldiers for performance of duties in good faith, AFSPA protection must continue in letter and spirit. The time-tested SOPs and drills of the Army must not be abruptly diluted or discontinued. A case in point is the opening of Cantonment roads, which raises security concerns. In Pulwama’s case, too, had the local administration/State Government not forced their way to permit plying of civilian vehicles and personnel alongside the movement of military convoys, this incident wouldn’t have never occurred. The Prime Minister’s announcement of giving full freedom of action to the armed forces is praiseworthy; although it’s late by a few years. This decision has already paid dividends wherein two masterminds of the incident, Ghazi and Kamran along with some more terrorists, are reported to have been eliminated in an operation launched by the Army on February 18.

Third, as always, the major cause for this massacre was intelligence failure as acknowledged by none other than Jammu & Kashmir Governor. There were enough indications of a possible terrorist attack on the social media — be it the statement ‘Bada hona chahiye, pura Hindustan rona chahiye’ or the video featuring Adil Ahmad Dar, also known as ‘Gaadi Takrane Wala’. Yet, collated information could not be translated into hard intelligence. Notwithstanding the existing setup, there is a crying need for better intelligence network through integration of all resources, preferably under the executive command of the Army. Similarly, the operations being executed in the Valley by different agencies like the Army, Central Armed Police Services and Jammu & Kashmir Police need a serious review. Both these verticals of intelligence and operations should function directly under the Army Commander, Northern Command, for optimised results.

Fourth, there are a lot of voices, including from politicians, for dialogue/talks with stakeholders. The present Government’s argument on “talk to whom?” and “there can be no talks with the gun pointing towards you”, is highly justified. It is only if the Pakistan Army comes on the table that talks can happen. But that will never happen. In fact, they will purge those, who even attempt to do so. A case in point is of Zulfikar Ali Bhutto, Benazir Bhutto and Nawaz Sharif, who were considered somewhat moderates. The present Prime Minister over there, too, is an acknowledged pawn of the Pakistani Army. Within the Valley, talking to separatists with demands of azaadi/Pakistan is an exercise in futility. Talks are, however, welcome within the overall framework of the Indian Constitution; perhaps with support of local political parties, who should garner support and confidence of the local population and become the mouthpiece of the Kashmiri public at large.

Fifth, an aggressive diplomatic effort across the globe towards exposing and isolating Pakistan should be the order of the day, in particular, the P5 countries, the Islamic world and the United Nations. Notwithstanding that Pakistan calls it a local movement, it would be naive to ignore as to who is providing weapons/ammunition, explosives and other material to the terrorists? It is definitely not the Union of India. Who is protecting the likes of Hafiz Saeed and Masood Azhar, who openly claim responsibility of conducting terrorist attacks and spreading the wings of terrorism in India? This in itself is enough evidence to expose Pakistan, which is sitting easy under the protection of China, which has been materially supporting militants in the North-East for more than half a century. Discreet diplomatic efforts should also be addressed towards China’s sinister designs. Denial of MFN status to Pakistan is a step in the right direction, the Government should consider other areas to hurt and choke Pakistan economically.

Last but not the least, rather than centralising their actions towards gaining television rating points, the media needs to be more responsible. There is no relevance of providing excellent platforms to anti-national elements and Pakistanis as TV panellists singing pro-azaadi/Pakistan songs, brazenly shouting ‘Hindustan murdabaad’ and spewing venom against India lionise them further. It provides them a shot of adrenaline and galvanises efforts towards subverting the minds of the youth in particular. Along with media, actions of human rights organisations, who are mostly indulging in security forces’ bashing, needs to be curtailed.

While it is time for the nation to rise to the occasion and give a befitting reply to the perpetrators of this dastardly act, at the same time, calm and composure must be maintained. A well-calibrated action plan and not knee-jerk reaction should be the order of the day.

(The writer is a defence analyst)