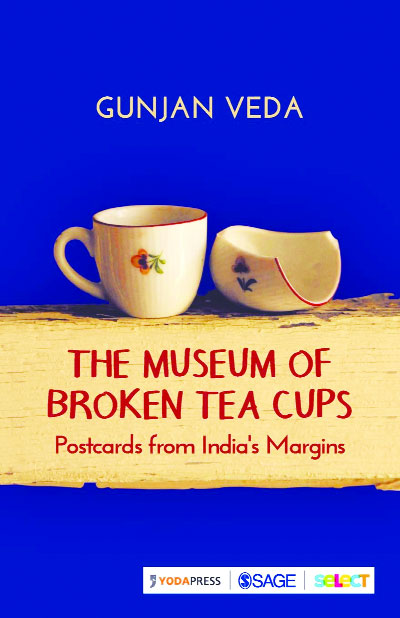 The Museum of Broken Tea Cups: Postcards from India’s Margins

Gunjan Veda’s book seeks to celebrate the everyday heroes, who have, despite all odds, managed to change not just their own lives, but the lives of those around them. An excerpt:

Ten kilometres from the Pratap Singh High School, on the road to the famous Kaas Plateau, Maharashtra’s very own Valley of Flowers, is the picturesque campus of the Bhartiya Bhatke Vimukta Vikas Va Sanshodhan Sanstha (Indian Institute of Research and Development of Nomadic and De-notified Tribes). Inside, there is a School of Social Work, a junior college, hostels and an Ashram school with 250 students from classes 1 to 10.

At 2 pm on a weekday, the place is abuzz with activity. Students and teachers have just returned from an invigorating lunch break, ready to resume their quest for knowledge. I head to the first floor of the double-storeyed institute building that embraces a circular courtyard. Here in a small corner room, a group of 50 students await me-the youngest is 12 years old, the oldest 16. Some play the tabla, the dholki and the Congo drums. Others create music on the synthesizer and the harmonium. Together they form the school’s orchestra-one that has won name and fame in the district.

They are often invited to sing for the All India Radio and at local programmes. As the strong voices of the girls and the boys in the group decry casteism and call for equality through their songs, a new energy pervades the room, and with it, a new hope.

It is these students whose stories I wish to tell…

Aishwarya Umesh Dharase is 13 years old. Slim, with a deep sepia skin tone, she wears a bright, sleeveless red and gold salwar suit. Her jet black hair is oiled and tightly pulled back into a pony. ‘I want to become a lawyer and fight for the truth,’ this Class 7 student tells me. She also wants to learn to play the harmonium and the tabla. After all, she spent the first few years of her life around these musical instruments. Aishwarya’s parents lived in the Bijapur district of Karnataka. Her father played the dholki, tabla and pakhawaj in an orchestra, while her mother was a singer. She also sewed garments to feed her family. Then one day, when she was barely six years old, Aishwarya’s mother died in an accident. Shortly after, her father abandoned her. ‘I was very small then. I didn’t understand what was happening. Suddenly I had no family, no one to call my own,’ she tells me matter-of-factly. Life as Aishwarya knew it was over. Initially her paternal grandparents looked after her. Soon however, her mausi (maternal aunt) took over.

Aishwarya does not know if she is related to her mausi by blood. She doesn’t know her maternal grandparents either. ‘Mausi says my mother was her sister and she treats me like her own daughter. That’s all that matters. I have seen her work in the fields to raise me. It is her name-Bharti-that I write when I am asked for my mother’s name.’ Bharti first got Aishwarya admitted into a Kannada-medium school but she wasn’t happy with the quality of education. She decided to send her to the Ashram school where her own daughter Vaishnavi was studying. It was in Class 6 that Aishwarya came to Satara. ‘I have been here for a little over a year now. Each day I learn new things. When I feel low, I think of my mausi. She is my inspiration. One day I will make her proud,’ she tells me, the quiver in her voice only emphasizing the determined look on her face.

Next to her sits a slim bespectacled girl in a white, printed salwar suit. 13-year-old Pragati Ranjeet More is a student of Class 8. Eyes brimming with tears, she narrates her story.

‘When I was born, my mother abandoned me in the hospital and went to live with her parents. She didn’t take me home. Didn’t hold or hug me.’ Pragati’s father collected her from the hospital and took her to Pune. There he left the tiny infant with his sister. ‘My bua raised me. She put me in a school in the city. Then one day my dadi turned up. She said that I shouldn’t stay in Pune. She fought with my bua and brought me to Phaltan in Satara district. Since that day my bua stopped talking to us.’

Young Pragati was once again uprooted. She lost the only life and family she had known. But she was a survivor. She began to adjust to her new life. Just as she was learning to cope, another tragedy befell the family. Their house in Phaltan collapsed.

They had to move to Satara. Pragati’s father used to be a construction worker. But he drank heavily and gradually stopped working. In fact, it was his drinking that had driven Pragati’s mother away. In Satara, her grandfather took up work in a hotel to feed the family. Pragati enrolled in a nearby school.

One day, when she was in Class 3, her grandmother and father fought bitterly. ‘My dadi burnt herself. She died,’ Pragati recounts in a stony voice. Her mother used this opportunity to divorce her father.

Despite all the tragedies that life had heaped on her, Pragati did not give up. She had learnt how to cook when she was barely five years old. While her grandfather helped her with the housework, he also had to go out and earn. So young Pragati went to school, did housework, cooked and looked after her brother. One day, in the newspapers, she read about the Ashram school in Satara. She quietly went to her father and said she wanted to join the school.

The Museum of Broken Tea Cups: Postcards from India’s Margins written by Gunjan Veda is published by Yoda SAGE Select