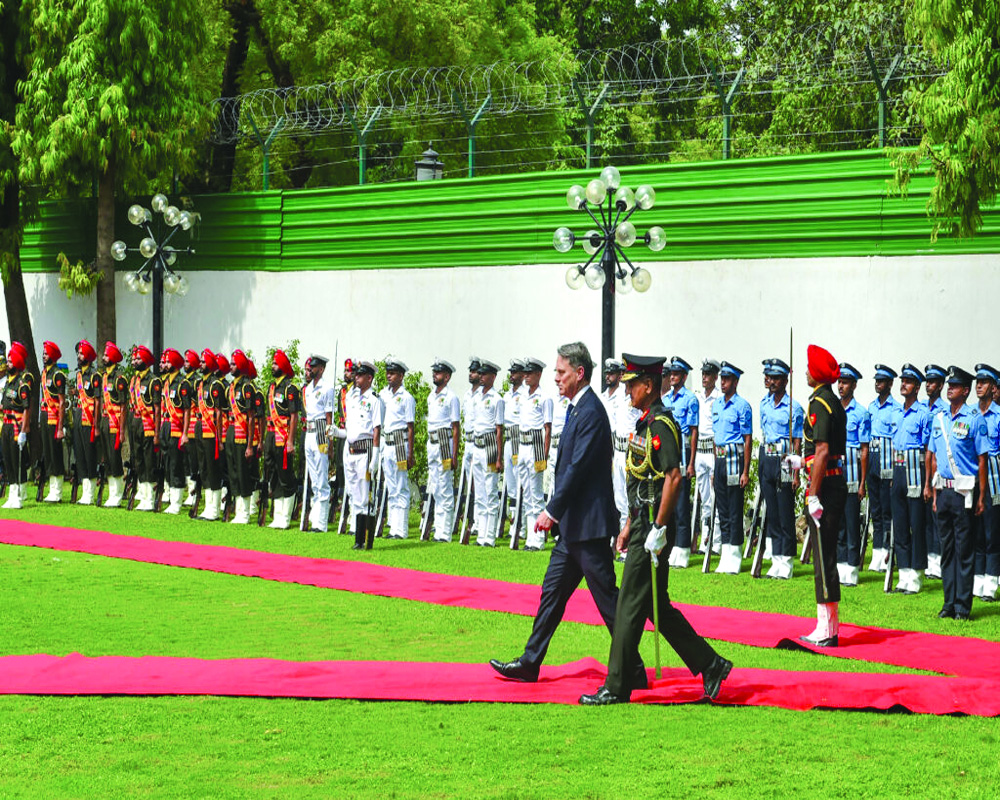 The visit bears high significance, both in bilateral and strategic contexts, and his bold remarks have proven the skeptics who anticipated a softening of Australia's policy towards China wrong. In his speech at the National Defence College, he pointed out that China was Australia's biggest trading partner but also security anxiety. In India's context, he emphasized, "India's own experience illustrates this maxim more than most. The assault on Indian forces along the Line of Actual Control in 2020 was a warning we should all heed."

He further added, "Australia stood up for India's sovereignty then and continues to do so now. It is vital that China commits to resolving this dispute through a process of dialogue consistent with international law". During the visit, it was also conveyed that Australia places India at the heart of its policy in the Indo-Pacific and beyond.

The emergence of bipartisanship in India policy in Canberra augurs well for the Comprehensive Strategic Partnership (CSP). In April 2022, Anthony Albanese, the Leader of the Opposition, welcomed the "deepening of ties" and the signing of the Australia-India Economic Cooperation and Trade Agreement (AI-ECTA).

In 2017, Albanese also led a parliamentary delegation to India to deepen parliamentary ties, and people-to-people relations and understand the social, economic, governance, and political issues.

India's External Affairs Minister Subrahmanyam Jaishankar has taken great satisfaction in how the CSP has deepened in recent years and also become the fulcrum of a buoyant Quad in the Indo-Pacific.

Peter Varghese, the author of India Economic Strategy maintains, "…the stronger that [Australia-India] broader relationship the better the prospect of an economic strategy. India should not be seen only as a geopolitical partner". The Department of Foreign Affairs and Trade has observed that India's youthful population and diversified growth trajectory present a significant opportunity in education, agriculture energy, resource, tourism, healthcare, financial services, and infrastructure among other areas. Two-way trade has risen to the US $ 27 billion in 2021. By 2035, both sides aim to double their bilateral trade and Australia seeks to bring India into its top 5 trading partners.  The Australia Economic Strategy report prepared by the co-author Anil Wadhwa for CII has identified 12 key sectors and 8 emerging sectors including, mining, services and start-ups, pharmaceuticals, healthcare and medical technologies, education and skills, agribusiness, infrastructure, power and renewable energy, railways, gems and jewelry, automotive spare parts, and tourism. The report complements Varghese's India Strategy across 10 sectors.

Now that both sides possess a much-informed view and appreciation of mutual interests, predicaments, and priorities-thanks to the two countries' strategies and frequent policy and political dialogues at various levels- there is a need to uphold institutional legacies and engage with key institutions to ensure progress in different sectors.

AIBC has been the lead institution in supporting discussions on the Economic and Cooperation and Trade Agreement since 2014, which was signed in April this year. The 2016 AIBC-Australian Financial Review (AFR) first-ever national business conference "Engaging with India" was successful in bringing Australian and Indian governments, business leaders, and influencers on a single forum to discuss the progress on CECA.

AIBC in partnership with Springfield City Group launched the India technology Summit in 2021 to build the Australia-India relationship by attracting world-leading Indian technology companies to Australia and make Springfield (only the second planned city in Australia after Canberra) become a one-stop-shop location for leading tech companies from India and Australia to collaborate and invest.

In sum, institutions like AIBC hold the key to an effective, meaningful, and productive business and trade engagement and legacies built over a long period can become force-multipliers for both Australia and India.

(Anil Wadhwa is a former Indian diplomat and Secretary (East), and AshutoshMisra is the CEO of the Institute for Australia India Engagement, National Sports Chair for AIBC, and Editor-in-Chief, India News. Views expressed are personal)