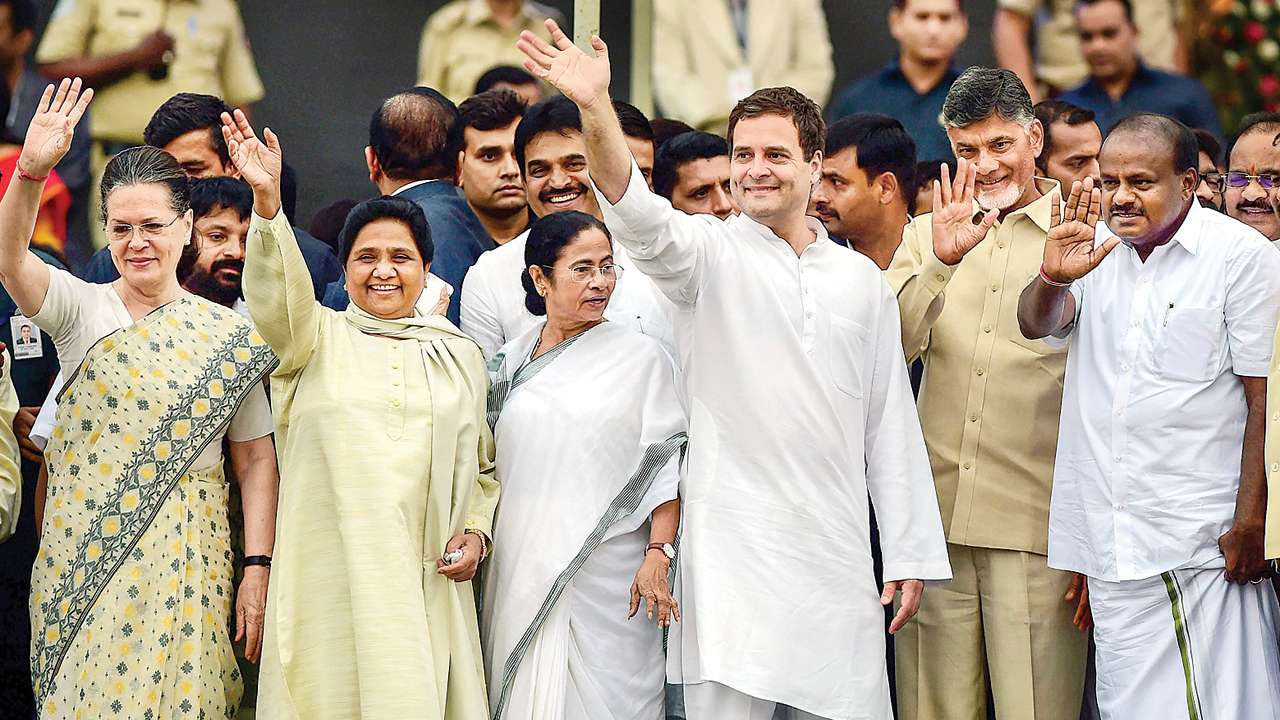 All talks on the grand alliance of the Opposition parties have been put on the back burner for now, and no one will talk about a united front until the results of elections in five States are out. In fact, the Opposition parties are not even talking to each other about the mahagathbandhan these days. The parties, which have nothing to do with the elections in five States, say the decision on alliances will be taken only after the results. The BJP has already told its alliance partners that Amit Shah is busy with the elections, so discussions over seat sharing and the alliance formula will be held only after the results. This has also been conveyed to Nitish Kumar, but despite this, the JDU leaders are saying that the seat-sharing announcement will be made soon.

There’s another reason why the grand alliance talks have been put on hold. The Congress President Rahul Gandhi is engrossed in the elections of five States, with the party facing a do-or-die situation. It is leaving no stone unturned in campaigning. That is why the parties — which will be going with the Congress, but have nothing to do with these States — have put the talks on hold.

Amid this, there is news that BSP supremo Mayawati has talked to Akhilesh Yadav over phone. Ajit Singh, leader of the RLD, has also spoken to both leaders. However, the final decision will be taken only after the elections. From the alliance point of view, Bihar, West Bengal, Jharkhand, and Maharashtra are the other important States after Uttar Pradesh. But in these States, there are no talks of alliance as of now. In fact, all regional stalwarts are waiting for the results of five States. The Congress and BJP will also wait for results because after that the political picture of the country will change drastically.

If the BJP fares well, it will either go with the JDU in Bihar and the Shiv Sena in Maharashtra on its own terms and conditions, or it will go alone in both States. If the BJP’s performance is dismal, then both the JDU and Shiv Sena would impose their conditions on the party. In the same manner, if the Congress does well, the kshatrapas will have to go into alliances on the party’s terms. In case the Congress doesn’t do well, then it will have to kneel before the SP, BSP, RJD, NCP, TMC, DMK, and TDP.

Whatever be the result of five States, one thing is clear from the present political scenario: The Opposition is going to form the largest alliance in Maharashtra. The Congress and its oldest ally NCP are reaching out to each and every small and big party, trying to persuade them to join the Opposition bandwagon. The Congress and NCP have finalised their alliance partners. Though the seat-sharing formula has not been decided, some arrangement is ready and has already been discussed. Both parties will stick to the old formula. The BSP and Raju Shetti’s party will also join the Congress and NCP, and will get one seat each from the latter’s quota.

Now, the Congress is talking to Prakash Ambedkar’s party for a tie-up. On the other hand, the NCP is in talks with Raj Thackeray’s MNS. Though the Congress is not ready to take the MNS into the alliance, Sharad Pawar might have other things in mind. The NCP chief might persuade Raj to either not fight the Lok Sabha Elections or field such a candidate who will pose a threat to the candidates of the BJP and Shiv Sena. Apart from that, the Congress and NCP are also reaching out to the Left parties and AAP. Though these parties don’t have much hold in Maharashtra, an alliance will be finalised with them and they will be given a chance to fight the Assembly Elections. A similar arrangement can be made for the SP as well.

THE STRATEGY OF AAP

This must be noted that in the last Lok Sabha polls, the AAP candidates were on the second position, after giving a tough fight to the BJP. But interestingly, the AAP has decided to not give tickets to any of the leaders who were in the fray last time. Anand Kumar has already been thrown out of the party, while Ashutosh and Ashish Khetan have also left. Rajmohan Gandhi is facing the age barrier, and MLA Devendra Sherawat is considered a rebel. Rakhi Bidlan is the Deputy Speaker in the Assembly, but the party will not give her a chance to fight. Jarnail Singh will also not contest.

‘NO ENTRY’ FOR BJP IN UP

There is a new headache for the BJP in UP. People have started opposing leaders, MPs, and MLAs of the party in many places. It started in April and has now become a common feature in both east and west UP, where people have put up ‘no-entry’ boards. It’s common to spot a hoarding with a warning to the leaders and workers of the party to “not be seen anywhere in the area”. In Shivkuti of Prayagraj, such signages cropped up after the Unnao and Kathua rape cases. Now, the no-entry campaign has started in the Awadh area. In many villages of Azamgarh, Bahraich, Kannauj, and Unnao, such boards are being put up. At first, the local BJP leaders tried to sort this problem out on their own, but now they have roped in the State leadership.