Influence, confluence and fluidity in between

Influence, confluence and fluidity in between 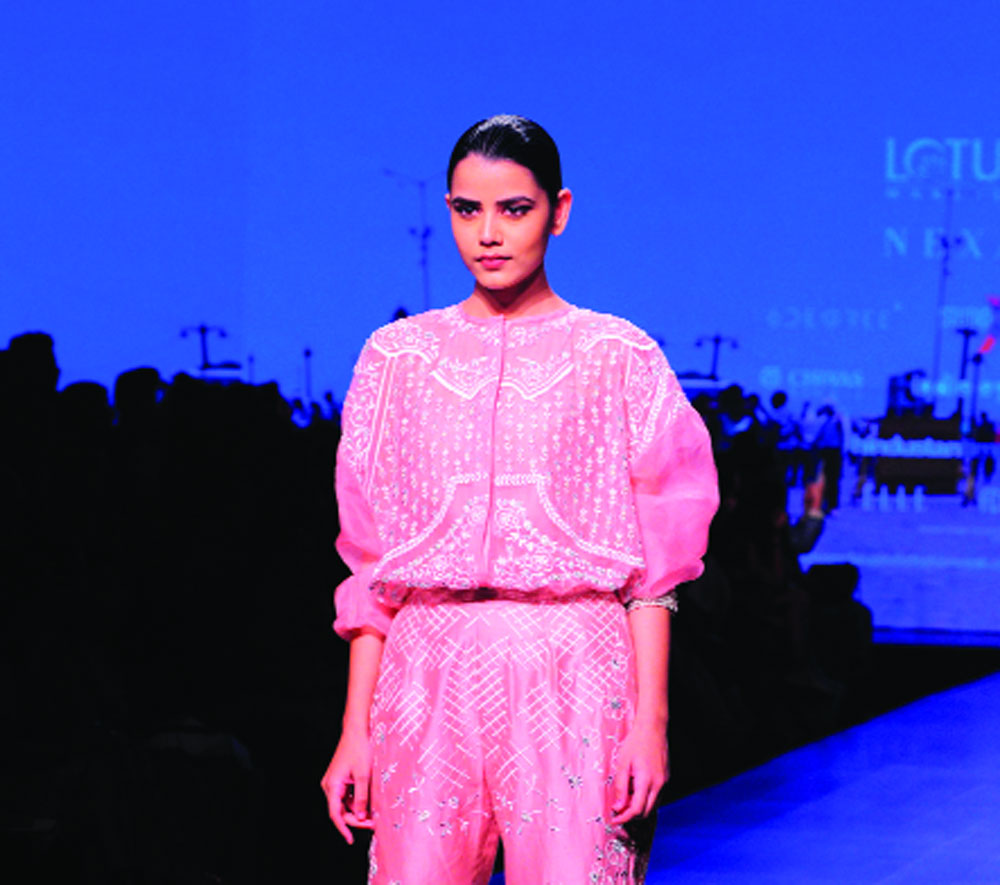 The Lotus Fashion week was all about global interpretation of our weaves, skills and unique stories. Aneeth Arora, Samanth Chauhan and Rimzim Dadu stood out with their newness

Fashion weeks are awaited with bated breath for they highlight a plethora of  motifs, textures, fabrics along with zany twists to traditional Indian and Western silhouettes and set the trend for the coming months. So the Lotus Make-Up India Fashion Week (LMIFW), ostensibly showcasing spring/summer 2019, drew a lot on earth elements, a palette of colour, indigenous weaves and technology that has made design and immersive and fluid experience.

Designer Anupama Dayal’s collection Broken focussed on  bringing out the new from within, a metaphor for rebuilding life with the old pieces. Using the Japanese concept of filling a broken bowl with gold to make it more beautiful than the original, the work was an exploration of the internal being. She  used rainbow and star fish motifs in different sizes since they can regenerate new limbs when the old ones get damaged.  She also used bold patchworks in eclectic prints with boundaries defined in gold. “It is a story that believes in ‘with women, and for women.’ These designs signify how women break through situations, events and innumerous responsibilities. But even after such hurdles, every woman has the strength to emerge brighter and much more beautiful, even if she is broken,” said Dayal post-show.

Another brand, Péro by Aneeth Arora, used underwater motifs in powder blue and turquoise, so they appeared floating in the ocean. Colour blocking, frills and ruffles dominated the collection along with crocheted edgings and beaded fringes, all with locally-sourced ingredients. Woven in various parts of India like Bengal, Madhya Pradesh, Bhagalpur and Banaras, versatile across multiple categories this season, Arora’s ginghams and tartans were light-hearted plaids featuring warm, upbeat pastels and neutrals together. Stripes were refreshed with wide widths in vivid contrasts, providing a contemporary vibe. She worked with the “kadhwa” weavers of Banaras, who embroider motifs on the loom.

Along with the simplicity of modern colours and prints were the decadent hand embroideries, meticulously crafted and luxurious with elaborate floral motifs etched into hand-woven tartans and stripes, along with velvets and linens. The shimmer and reflection of light in water had been captured by rendering these delicate aquatic prints of flora and fauna, through gradation of sequins, beads and threads on hand-woven grounds. Crocheted edgings and beaded fringes, developed closely with the skilled Afghani refugees, were celebrated to add to the whole Caribbean mood. Different materials were utilised for their textures, including hand-crafted ceramic buttons gingerly glazed in Indian hues.

Samant Chauhan’s latest collection brought together nostalgia and the city of Mumbai together. His collection was a homage to the past that is quickly being redeveloped and recast  into the present, which is also fast slipping into the future. It was about European influence and confluence. He played around with structures, silks, pastel colours and elaborate but subtle embroidery, almost like embossed porcelain, in flowing European lines.

Collaborations were the order of the day. The Ministry of Textiles, Government of India and the Australian High Commission in India brought five designers together to work with Indian handlooms. Said designers Romance was Born, We are Kindred, Brother’s Earth, Cassandra Harper and Roopa, “We are pleased to showcase Indian handlooms with design interpretations from five Australian designers. This collaboration will highlight the versatility of the Indian textiles, opening gates to foreign intervention,”said Sanjay Rastogi, DC (Handlooms), Ministry of Textiles. The show comprised collections developed by Romance Was Born and We are Kindred with brocades from Uttar Pradesh, Brother’s Earth in collaboration with Indian designer Naushad Ali with natural indigo-dyed handloom textiles from Tamil Nadu, Cassandra Harper with ikats from Telangana and Roopa with silks from West Bengal.

“Hand-woven textiles bring a unique character to the garment. We are living in an exciting time in fashion where the story behind the garment is more important than ever. This intersection of story and the richness of handloom has inspired Brothers Earth and Naushad Ali to collaborate on this men’s capsule. We are so excited to be part of the Australian Fest,” said Brothers Earth. Roopa Pemmaraju’s S/S 19 collection stood out for paying homage to the ancient network of trade routes that once connected the East and West.

Rimzim Dadu’s HUEMN SS19 collection was influenced by the cultural and socio-economic ambience of conflict ridden Kashmir set against its raw beauty; and the hope and pride in its growing youth. It’s stark contrasts of what has passed and what is to come formed the backbone of the narrative.

The line comprised multi-dimensional clothing in classic Huemn style with pattern play and a strong interjection of hand-made surfaces and athletic detail to translate a fearless and modern, urban aesthetic. Photographs by Hanauer and Azaan Shah have been played with and converted into print and mixed media textures. An assortment of intricate hand-work techniques were used to add unexpected detail to individual garments. The mood was powerful yet playful with edgy, contemporary styling.

The collection drew inspiration from age old techniques of lace-making and stencilling in signature materials like handmade chiffon cords, metallic cords and metal wires. The collection explored sculptural forms for ready to wear clothing using couture-like techniques. His collection aimed to explore intersections between fashion, art and technology through a collaboration with a multi-disciplinary artist — Harshvardhan Kadam of Inkbrushnme — and an interactive experience with technology studio Digital Jalebi. While the artist used the virtual world as his canvas to interpret Dadu’s collection with Google Tilt Brush, the audience had the opportunity to see every brush stroke he made in thin air on huge walls. It was the  first time virtual reality was being used live for a fashion show in India.

His Above the tree line was inspired by Pahadi roots. Rugged, rocky asymmetric silhouettes, deconstructed shapes with inside-out seams, the collection was a tribute to the mountains with their mystique and challenges. Fabrics used comprised wool-linen blends, weaves that are made on handlooms and ikats. Hand-crafted shoes and gloves accessorised the look.

The FDCI has also collaborated with the Japanese Embassy to bring promising designer Atsushi Nakashima to the LMIFW. Nakashima, who has worked as an assistant designer with Jean Paul Gaultier, has also showcased at Milan Fashion Week in the past.