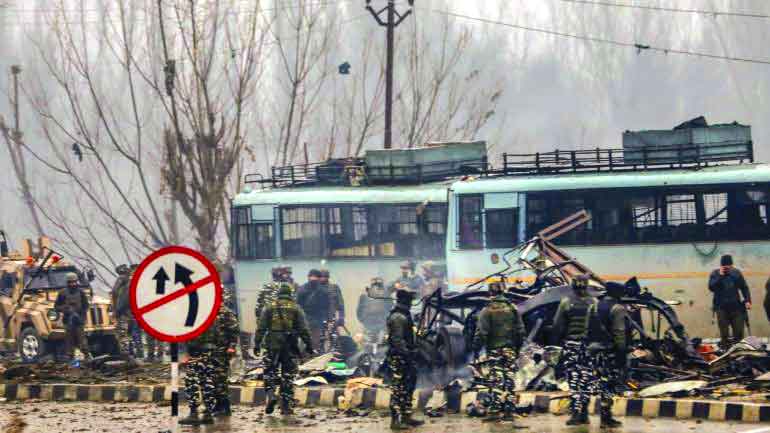 Like the surgical strikes failed to deter Pakistan from cross-border infiltration, deep penetration air strikes, too, will not stop it from waging a proxy war. Change has to come from within

India crossed the red line in Pakistan for the first time since 1971 when its Air Force carried out audacious pre-emptive attacks in self-defence, a second step escalation against Jaish-e-Mohammad (JeM) training camps in Balakot as retribution for the killing of 44 CRPF soldiers at Pulwama on February 14. In 1999, during the Kargil conflict, India unilaterally declared that it would not cross the Line of Control (LoC)  to preclude any escalation and lost two aircraft and 540 soldiers in evicting the intrusions of the Northern Light Infantry disguised as mujahideen. Prime Minister Modi displayed political will in ordering air attacks outside Pakistan-occupied Kashmir (PoK) but the retribution came 24 hours later than he had desired, wanting it to be timed with the inauguration of the war memorial on February 25.

When the surgical strikes were launched in 2016, he had told the then Chief of the Army Staff, Gen Dalbir Singh, that he did not want any casualties, get troops to return by dawn and ensure there was no escalation. This time around, Modi has surprised not only Pakistan but many Indian strategists by striking at targets deep inside Pakistan. Most Indians were expecting retribution for sure but few had imagined the use of the Air Force instead of the expected surgical strike 2.0 in PoK. What was delivered was shock therapy.

Six Mirage 2000 aircraft covered by 10 Sukhoi Su-30MKI violated Pakistani air space to destroy the JeM training camp at Balakot. Like in Kargil, these same aircraft employed precision-guided munitions to avoid collateral damage. That the Mirage mission completed its task without being intercepted by Pakistan’s air defence and fighter aircraft is commendable and showed laxity on the part of Pakistan Air Force. Interestingly, like after the surgical strikes, the  Director General of Military Operations (DGMO) announced that surgical strikes targetted terrorist launch pads and not Pakistani Army posts — emphasising India’s war was  against terrorism and not Pakistan — this time it was Foreign Secretary VK Gokhale who issued a terse and calibrated statement, highlighting  that India had taken “non-military pre-emptive action” to ward off imminent terrorist attacks by habitual offender JeM, the terrorist organisation based in Balakot. He reminded Pakistan of its pledge in 2004 to not allow the use of Pakistani soil or territory under its control for terrorist attacks against India. How escalatory air strikes constitute no-military pre-emptive action is creative play of words.

This time, there was actionable intelligence on Balakot, whereas in 2001, after the Parliament attack and 2008 (Mumbai), intelligence agencies were unable to provide accurate eight-figure coordinates of terrorist training camps, saying they were mobile and not static. Air strikes deep inside Pakistan represent India raising the ante, shedding its coveted policy of strategic restraint. This is the first time one nuclear power has used its Air Force to strike targets of another nuclear power. To maintain surprise, India had neither mobilised its armed forces nor cancelled leave, as was done in 2001, which has been restricted now.

It seems India is confident that Pakistan will not escalate with military action. That does not mean that there will be no retribution, as it has, though India’s marginal conventional superiority may deter Pakistan from escalatory retaliation. The last thing that Modi wants is a full-fledged war, which will be risky for India and crippling for Pakistan.

Although US President Donald Trump had referred to India planning “something big which is dangerous and must be stopped”, America did nothing to avert the strikes in a region which the West has labelled as a   nuclear flashpoint. US Secretary of State, Mike Pompeo, has issued a statement calling for restraint and urging Pakistan not to take military action as also dismantle terrorist camps on its territory. One of the reasons Pakistan was emboldened to execute its suicide attack at Pulwama was that it believed that Trump would not chide it or  intervene as the restraint imposed on the Pakistan Army by the US was lifted for Islamabad helping Washington in its reconciliation talks with the Afghan Taliban.

Let us be clear. Like the surgical strikes failed to deter Pakistan’s cross-border infiltration, the deep penetration air strikes, too, will not stop it from waging proxy war. It will mitigate, not eliminate the scourge of terrorism. In Kashmir, things will get hotter given that IED and VBIED have returned, augmented by local suicide bombers. Make no mistake that air strikes, like surgical strikes in 2016, are not effectively replicable. One swallow does not make a summer.

The reaction from Pakistan is confused. There has been a denial of what it called “fictitious” claims. Simultaneously, it claimed that unwanted aggression will not go unpunished. Foreign Minister Shah Mahmood Qureshi even said that Pakistan will respond “at a time and place of its choosing.” The Pakistan military cannot afford any further loss of face, especially after Osama bin Laden was plucked by US Special Forces from Abbottabad under their noses. The justification for Pakistan Army’s primacy in society and its designation as custodian of Pakistan’s core values will take a big hit if it does not retaliate. The humiliation of 1971, coupled with the air strikes, is bound to dilute the image and aura of the Punjabi Army. Immediate retribution most likely will manifest in another spectacular suicide attack in Kashmir or even outside Jammu & Kashmir. Pakistan has already responded with its Air Force but its dilemma will be target selection. Within the last 24 hours, tension in Jammu & Kashmir has risen and Pakistan has claimed bombing Poonch and also capturing two Indian pilots.

Pakistan will respond to violation of its sovereignty. It will not give retaliation a go by, requiring the Indian armed forces to be on high alert. Pakistan could select a military target like an ammunition dump or a military installation proportionate with the loss of life and materials suffered at Balakot. It will be unwise for the BJP-led Government to tom-tom the air strikes as an election catalyst. Inflammatory speeches and boasts of air strikes like surgical strikes should be avoided. Three nights ago, a Pakistani TV anchor asked me whether the clouds of war had passed over. I replied in the negative adding: “India’s retribution is inevitable.” Willy nilly, through its air strikes, India may have called Pakistan’s nuclear bluff.

To the question everyone asks: How to change Pakistan military’s behaviour, the answer usually is: Difficult but if it happens, it will happen from within. By India dropping its coveted strategic restraint though surgical strikes and air strikes, New Delhi has shown that if it can’t change Pakistan, it can change itself.