Looking ahead without fear

Looking ahead without fear 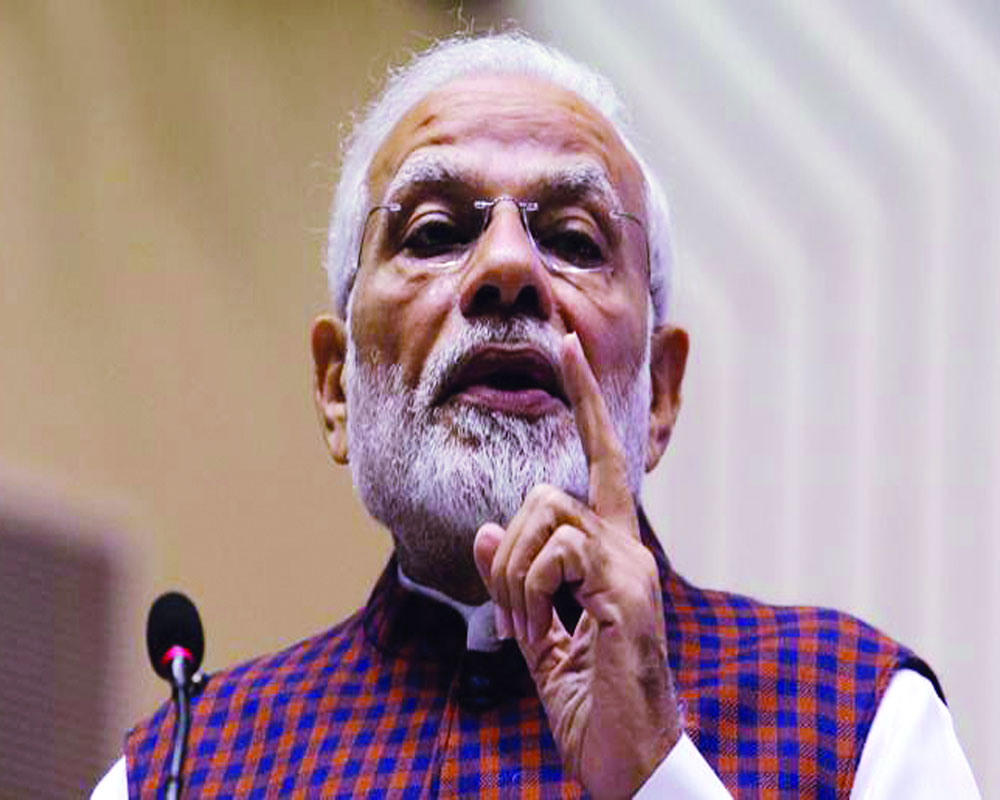 During his interview, Prime Minister Modi spoke on a range of topics to address concerns of his constituents. Critics must desist from extracting a pound of flesh

A prime ministerial interview is an occasion for the incumbent to address his constituents, not an opportunity for critics to extract their pound of flesh. In an interview to news agency, ANI, Narendra Modi tackled a range of issues with finesse. Deflecting charges of corruption in the Rafale deal, Modi made the subtle distinction that the allegations were not against him, but his Government: “If there is any allegation against me personally, let them dig who gave what, when and where and to whom”.

This is a gentle dare to Congress president Rahul Gandhi to find a link to Modi; the Bofors kickbacks trail led directly to Sonia Gandhi crony Ottavio Quattrocchi, whose London bank accounts were unfrozen by the UPA Government to allow him to withdraw the money. The Rs 30,500 crore offset deal with Dassault, under which the Defence Research and Development Organisation, Hindustan Aeronautics Ltd and nearly 70 private firms will manufacture varied equipment, lacks similar resonance. Modi pressed the point mildly, “What is the need for middlemen in defence deals? … Had ‘Make in India’ been initiated 70 years back, the malai khane wala raasta from outside would have been closed”.

Modi expanded on the surgical strikes: “When Uri happened, when our jawans were killed, burnt... there was rage within me… I realised that the anger in the Army was much more than mine. For the morale of the forces, they somehow wanted justice to be done…” Thus, the operation was planned. “I gave clear orders that whether you get success or failure, don’t think about that, but come back before sunrise”. Revealing that he was in live contact that whole night, he said there were anxious moments when the flow of information stopped for an hour after sunrise, until he was finally told the men had returned safely. Thereafter, Pakistan was informed, the Cabinet Committee on Security met and an Army officer briefed the nation.

Denying that his Government or party politicised the issue, Modi countered that the very same day, “leaders of some parties raised doubts over the surgical strikes. It was necessary for Pakistan to speak like this to keep their morale intact. But what Pakistan was saying, was being said here too…. Politicisation started from that point”.

Regarding overtures to the then Pakistani Prime Minister Nawaz Sharif and congratulatory message to Imran Khan, Modi said India, be it UPA or NDA, favours dialogue, but talks are inconsistent with cross-border terrorism. Dismissing criticism of his foreign trips, he said all Prime Ministers have similar travel schedules because of the numerous multilateral forums; “If the level is lower than the Prime Minister, the voice is not heard… I try that India’s voice reaches the world… My visits are noticed because I interact with people and take decisions”.

Combative over allegations that his Government has weakened institutions, Modi charged that the previous Government created the National Advisory Council against the Prime Minister and Prime Minister’s Office; a Cabinet decision was torn up by a big leader (read Rahul Gandhi) at a Press conference; judges were selected on the basis of ideology, and many Reserve Bank of India Governors were forced out before completion of their terms. However, when his Government learnt of the bickering in the Central Bureau of Investigation, the top two officials were asked to go on leave. He insisted Urjit Patel resigned for personal reasons.

Denying charges of vendetta raids, Modi hinted at the Sohrabuddin judgement where the Supreme Court observed that the case seemed tailored to implicate political leaders. The Enforcement Directorate secured a “razdaar” from a foreign country, and a Congress worker turned up as Christian Michel’s lawyer. Nirav Modi, Mehul Choksi and Vijay Mallya fled because tolerance for their activities ended, but international laws are being invoked to bring them back, and their property is being seized even in foreign countries. While those, who absconded under previous regimes, have not returned, Modi promised, “those who fled during this Government, will be brought back… Those who have stolen India’s money, will have to compensate for each and every penny”.

Modi said he was the first to raise the issue of black money and banking havens at the G20; this was accepted as a serious concern and a source of terror funding; nations agreed to share information. While many well-connected accused are moving freely, he remarked, “those considered first family, who ran the country for four generations, are out on bail, that too for financial irregularities. It is a big thing... The country’s former Finance Minister is making rounds of courts…”

On the generally clubbed issues of Ram temple, triple talaq and Sabarimala, the Prime Minister said the Ordinance was a response to the Supreme Court verdict; triple talaq is an issue of justice and is banned in most Islamic countries; while Sabarimala temple has its own traditions, just as there are temples where men cannot go. Moreover, “a woman judge in the Supreme Court has made certain observations..… There should be a debate on that as well sometimes”. As for Ayodhya, the matter is at its final stage in the Supreme Court. Urging Congress lawyers not to create obstacles, he promised that once the judicial process ends, “whatever be our responsibility as Government, we are ready to make all efforts”.

Regarding Congress’ promises of loan waivers for farmers, Modi said these have failed to resolve the farm crisis; farmers have to be saved from incurring debt in the first place. On Opposition plans for a grand alliance, he said parties with no national agenda were uniting on a single agenda of opposing him (Modi). On Uddhav Thackeray’s criticisms, he said the BJP adhered to coalition dharma in 2014 when it won its own majority, and he was committed to giving space to regional aspirations.

Modi condemned lynch mobs in the name of cow protection and the political violence in which BJP workers have been killed in West Bengal, Kerala, Karnataka, Tamil Nadu, Assam, and Jammu & Kashmir. On Ganga, he said a drain polluting the river for 120 years has been closed and the next step is to cleanse the tributaries that drain into the river. The Prime Minister answered questions on all important and current issues; in the run up to the polls, as in 2014. More televised interviews can be expected.