Shift the culture of violence

Shift the culture of violence 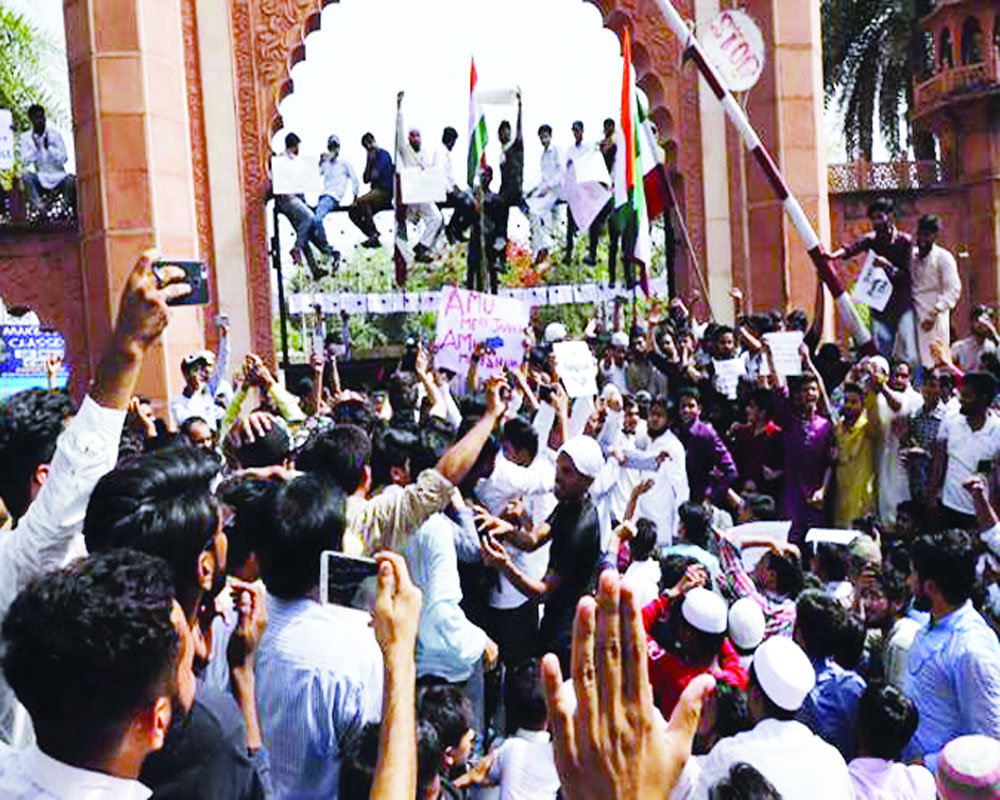 Ever since its inception, AMU has maintained a cordial atmosphere for students as well as faculty members. All must strive to maintain this delicate balance

As we all know, 2019 is the year of general elections in India. And the students’ union of any university in India plays a vital role in raising issues of local and national importance, lending a futuristic perspective of the nation’s goals. At the Aligarh Muslim University (AMU), established in 1877 by secularist and nationalist leader Sir Syed Ahmad Khan,  students have always raised their voices on several occasions in the past in an efficient manner. However, it has been observed in the recent past that AMU has become a soft target and a centre for polarisation for right-wing groups. One incident after another clearly indicates the intention of a group of students belonging to a political outfit to create nuisance in the peaceful campus. Whether it is the  matter of serving food in the dining hall, or taking the “tiranga yatra” without permission or unauthorised entry of a TV reporter to the campus to cover an event organised by AMU Students’ Union, all these events seem to be pre-planned to disturb the peaceful academic atmosphere of the campus. It clearly shows that a group of students following a certain political ideology tries to distract attention from unemployment and corruption within the Government before the 2019 general election.

There is no denying that the AMU since its inception has succeeded in maintaining a cordial atmosphere for students and faculty of all religious affiliations to live and work together. The Government of India must see to it that this delicate balance is not disturbed by communalists of either kind. Likewise, our educationists should consider the cause of the AMU as their own cause and seek to preserve its autonomy as well as its residential character. In his less than two years of tenure, Vice Chancellor Prof Tariq Mansoor has taken many initiatives, be it smart classrooms or developing infrastructure in the campus, maintaining the academic standard of the university or reviving the tehzeeb among students and faculty to make this great seat of learning unique.

Professor Mansoor believes that “talking with students and their representatives on a regular basis and making them feel comfortable and relaxed is very important in resolving any crisis.” Students always want the administration to reach out to them and get their attention. Prof Mansoor behaves like a fatherly figure and keeps the communication lines open with students so as to make them feel connected, which helps in resolving any matter smoothly.

Referring to a recent incident, Shashi Bhushan Roy, who is an alumnus of AMU and was in the campus recently for a corporate meet, says, “I have been here for around 15 years and received all my education from this great seat of learning. I was never discriminated on the basis of my religion or caste. In fact, I want my son to get admission in AMU. He has already applied for admission this year in the university, which would be his first choice, if selected.”

In an appeal to the students’ community, the Vice Chancellor said, “Our glorious institution, the Aligarh Muslim University, has been passing through challenging times. Our resilience and spirit has been and remains our biggest strength. During the recent past, my team and I have been making the best possible efforts to resolve the situation, which we have successfully overcome.” He further said: “I will continue to see that innocent students are honourably exonerated, and no injustice is done to any student because of false accusation.” This appeal boosted the morale of students and they felt safer and connected with the administration.

It is a matter of great satisfaction that AMU is ranked among top universities at the national as well as the global level. It has successfully reached the top academic rankings in the world. Academic standards are improving, the curriculum is being upgraded and enriched on a regular basis in every department so as to make sure the education and training provided is relevant to the need of the times. At the same time, the AMU management is trying to preserve the Aligarh tehzeeb by making sure that the faculty-student relations are cordial, respectful and beneficial to each other. With the help of alumni and well-wishers of the AMU, the management is also striving to make the university serve its basic purpose, which is to provide good and relevant education that will enable graduating students to get easily placed in the global market.

Sir Syed Ahmad Khan dedicated his life for the Hindu-Muslim unity in the country and worked all his life for the educational uplift of the community and to strengthen a pluralistic society of a modern India. He stressed on making education a medium to transform people into good human beings. AMU represents the secular Ganga-Jamuni tehzeeb and the AMU community is committed to preserving this identity of this great seat of learning.

The AMU management has to carry the legacy of the great reformer Sir Syed. And the current Vice Chancellor, with his over three-decade association with the university, has to take the lead in guiding the top brass in ensuring excellence for the famed varsity. A good beginning is seemingly visible. In the last two years, factionalism and groupism on the  campus have decreased. The need of the hour is to maintain this momentum.

For the AMU management as also the Vice Chancellor, their biggest challenge would be maintaining law and order situation in the institution. Understanding the dynamics of the campus would come handy for them. Also, it is high time that the AMU community worldwide supports the Vice-Chancellor in making it one of the best universities of the country. It now has around 28,000 students, 2,000 faculty members and 6,000 non-teaching members. Non-Muslims among these employees have a very viable presence. AMU is one of the most prominent residential universities in the subcontinent and receives students from all walks of life.

It has an eminent history, which is intricately linked with the freedom struggle and the formulation of the Indian education system. People across communities have contributed to making it what it is today. It is necessary that the minority character of the AMU must be protected in the national interest as it was established and administered by the minority community which enjoys protection under Article 30 of the Constitution.

(The writer is a well-known linguist, author and columnist)