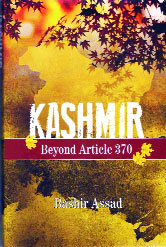 Bashir Assad, the Kashmiri writer has come out with yet another interesting and insightful study of Kashmir following the abrogation of Article 370. To quote Bashir, he has brought out the “bitter truth following his inner voice” underscoring the Islamisation and Pakistanisation of narratives in Kashmir. And he blames the political leadership in Kashmir which remains “mired in conservatism and short-sightedness around Muslimness” for the troubled situation. Competing schools of Islamist extremism have sway in Kashmir with the local political leaders, intellectuals, media, social and cultural activists, lawyers, businessmen, employees etc. spearheading the Islamist extremist movement. Being witness to the steep decline of the unique Kashmiri culture, Assad calls upon the silent majority of Kashmiri Muslims “not to be carried away by the frenzies of the extremists who thrive on violence”.

As regards the decision of the Indian parliament to revoke Article 370 and reorganise the J&K State into two UTs of Ladakh and Jammu and Kashmir, the international community has by and large viewed this decision as India’s internal affair, with the exception of Pakistan and its ardent supporters-China, Turkey and Malaysia. However, there has been concern over the restrictions imposed in the State following this decision. So far as the local response to this historic decision is concerned, Assad is right in his analysis that in north Kashmir (excepting Sopore and Rafiabad belt in Baramulla district which is dominated by Jamaat-e-Islami), the local people have remained peaceful. And the new narrative of the Indian Government revolving around empowerment, investment and development (EID) has found resonance among the people in rural Kashmir, Gujjars and Bakarwals, Paharis, Kupwara, Handwara, Gurez and most of the Jammu region.

In case of south Kashmir, Jamaat-e-Islami has been influential in Kulgam, Tral, Pulwama, Bijbehara, Anantnag, Kokernag, Doru and Pahalgam and that gets reflected in the different political response and incidents of violence there. In central Kashmir, Srinagar city remains the hotbed of separatism nerve centre of Pakistani narrative being parroted by the political elite, intelligentsia, academia, journalists and civil society.

Coming back to Article 370 , Assad believes that the idea behind this Article was to allow the unique Kashmiri identity based on composite culture, social harmony and brotherhood to flourish. This very foundation of Kashmiriyat collapsed with the ethnic cleansing and forced exodus of the entire indigenous minority community of Kashmiri Pandits in January 1990 and thereafter. The Pandits continue to live in forced exile for the past 30 years now. And there is no prospect of their return to their homes, as all their landed properties, houses, business and educational establishments and even the temples have been occupied in an organized manner. And with the digitisation of land revenue records going on in full swing in Kashmir, all these properties are being conveniently transferred in the names of their illegal occupiers. Here it would be pertinent to mention that all through the past 75 years, the successive State governments have legalised the settlement of non-Kashmiri Muslims in the State. Over 26,000 Afghan Pashtuns were provided land and State citizenship in 1950s at Gutli Bagh, Ganderbal. Similarly over 650 Tibetan Muslim families were provided land and State citizenship in Hari Parbat area in Srinagar around 1959-60. And after 1970s, one has been noticing the ingress and silent settlement of radical Muslims belonging to Allah Wale group from Uttar Pradesh, Bihar etc., who set up their shops and captured the local mosques. So much so, over 800 local Kashmiri Muslim Imams were silently replaced by these radical fire-brand non-local Muslims who contributed a lot in radicalising the Kashmiri Muslim society by weaning them away from the local Sufi-Rishi tradition of Islam. Assad has been honest in pointing out that most of the Kashmiri Muslim employees who would shift to Jammu during the annual Durbar move, have purchased land or houses in Jammu particularly during the past decade or so. This is in quite contrast to the fact that none of the Hindu employees shifting from Jammu to Srinagar during the Durbar move, have ever purchased in any land or house in Kashmir. One may add that thousands of acres of forest and nazool land has been occupied by influential Kashmiri Muslims and Gujjars/Bakarwals, which was subsequently regularised by Farrooq Abdullah and GN Azad governments under the Roshni Act. All this has been done to change the demographic character of Jammu region into a Muslim majority one, so that the narrative of Muslim and separatist politics is extended to Jammu region as well.

Assad makes yet another valid point stating that the NC government under Chief Ministership of Farooq Abdullah (1996-2002) rebuilt the “completely collapsed infrastructure including hundreds of bridges, schools, hospitals, shrines and government buildings.” Yet the NC and its leadership never highlighted these achievements in their 2002 election campaign. Instead their election plank was the restoration of autonomy. Here one would recall how the NC stalwart Mirza Afzal Beg would during his election campaign in 1977 flaunt a piece of rock salt (of Pak origin),and a green handkerchief (rumal) in order to emotionally blackmail the local Muslim population. Assad is emphatic in saying that both the “NC and PDP used Article 370 for winning elections. They only complained about the erosion of authority when out of power. For them, Article 370 was laying golden eggs”. The abrogation of Article 370 once again brought the think tanks, NGOs, human rights groups, media etc. to the fore, with the local political class propagating “soft separatism”. The problem is compounded because the “political family fiefdom has taken deep roots in Kashmir. And this political kinship survives in the conflict, with both the separatist and mainstream political elites being the conflict profiteers”. So the challenge for the Government of India is to make peace more profitable for these political elites than the conflict.

Assad argues that the increasing Pakistanisation and Islamisation of the Kashmiri narrative, actually prompted the Modi government to abrogate Article 370. He blames the separatists and the NC and PDP leaders by holding the threats of secession, for the dilution of Article 370. As regards the impact of the abrogation of Article 370, Assad is right in saying that “the majority of Kashmiris are happy that the political class, which exploited them emotionally, economically and politically for decades, is finally made to pay the price for it. The common people want these corrupt leaders to be arrested on charges of corruption, misappropriation, embezzlement, nepotism and favouritism”.

Now that Article 370 is history, new tasks for the government are to restore the confidence of the people through EID, de-radicalisation, rational delimitation to give due representation to deprived sections both in Jammu and Kashmiri regions, and to undo the artificial merger of areas in a particular constituency initiated by Mirza Afzal Beg in post-1975 period to prevent the Shias, Kashmiri Pandits, Gujjars and other communities from getting elected from their territorial strongholds. To conclude, the book provides a refreshing narrative of the actual situation obtaining in Kashmir, not touched upon otherwise by the so called Kashmir experts. As such it is a must for all those interested in understanding the social and political dynamics in Jammu and Kashmir.

The reviewer is a Senior Fellow, Nehru Memorial Museum and Library, New Delhi and editor, Himalayan and Central Asian Studies