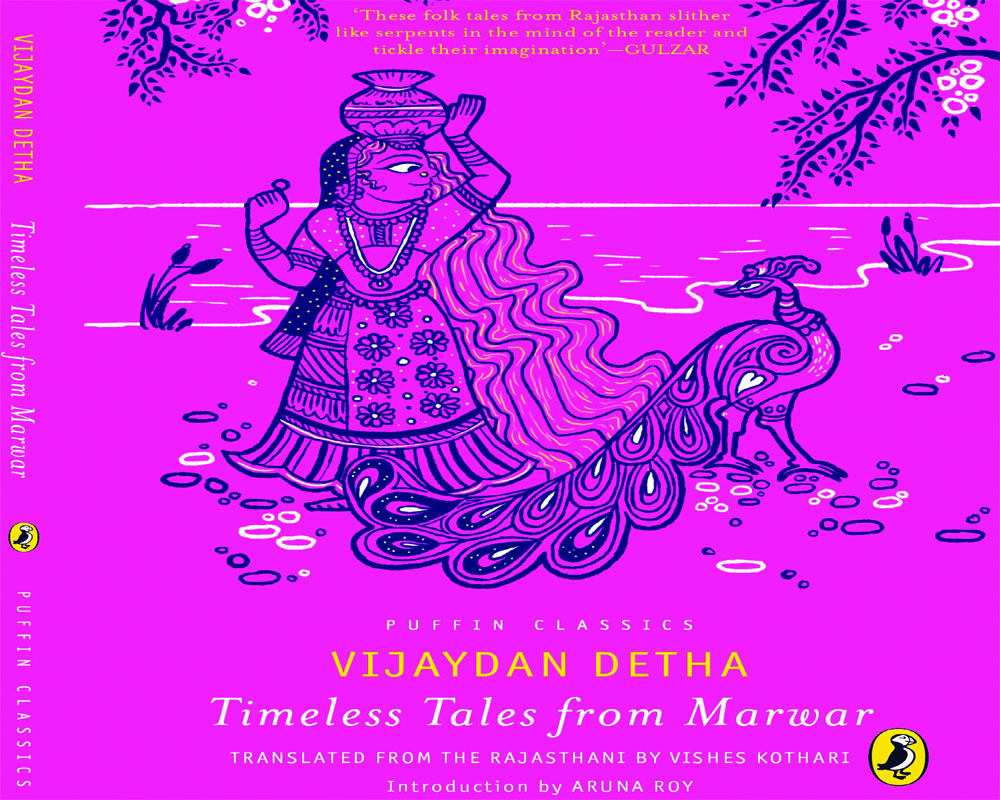 Timeless Tales from Marwar is a compilation of stories collected and written by Vijaydan Detha, and beautifully translated from Rajasthani to English by Vishes Kothari. An excerpt:

At the hour of death, the parents impressed upon their seven sons many a time to keep their only sister well, to take good care of her and not to let her suffer in any way. To find her a good match. Give her a good dowry. If she suffered after they went, even after dying they would not attain moksa. However, the son’s wives were absolutely horrid. If they had their way, the sister would suffer for sure.

The brothers reluctantly agreed to their parents’ wishes, but the old couple could not trust them much. Their lives left their bodies with great difficulty.

And with the death of the parents, the wives lost whatever shame they had left. They would make their nanad toil all day. They would curse and abuse her. The nanad would go behind the house and sob to lighten her heart. Every day, the wives would mutter and curse that the man who married the girl would surely have rotten karma; so useless she was! However, the nanad was actually quite deft and thoughtful. Beautiful too. If her sisters-in-law didn’t see this, what was she to do! It was the colourful festival of the Teej of Saavan, to welcome the monsoon. On every tree, swings were hung. In every lane, groups of girls, decked out in their finery and singaar, appeared. But that poor girl, the sister to seven brothers, stood crying behind her house in filthy clothes. With whom could she share her pain!

When the youngest brother saw his sister sobbing, his heart melted. In all the other homes, today was the day when sisters would deck out in their best. The brother slowly approached his sister and asked her the reason of her misery. However, she kept silent.

Though the youngest brother was scared of his wife, he still had some respect and love for his sister. With some trouble, he had found a prospect for his sister and had fixed up the engagement. She was to be married on the fifth day of Saavan — just two days hence! The sister would go away to her husband’s home. Ram knows when she would return!

When the brother kept asking questions, the sister finally revealed to her brother her pain: she too wanted to wear a beautiful new ghaghra and chunari and go play and celebrate on the swings. The brother went to all his sisters-in-law to ask them to lend their fine clothes, but none of them agreed. He finally went to his own wife. She agreed but on one condition: if her silken chunari or ghaghra were spoiled, she would dye them again in his sister’s blood! The brother thought what damage could come in just one day. Even then he asked his sister to be extremely careful and handed her the new clothes. And got bound by the promise he made to his wife.

The sister’s luck was so bad that as she swung on the swings, it suddenly began to pour so heavily that despite her being most careful, the silken clothes got drenched. Fully soaked! The colour of the chunari began to run. In great fear she went home. As soon as her brother’s wife saw the state of the clothes, she flared up and hissed like a black snake! Went and lay down. The husband tried to calm her, but she just would not listen. ‘Being a man, you go back on your words,’ she taunted. ‘Either spit 7 times and lick it up or fulfil your promise.’

One can live without a sister, but how can one live without a wife! Till his sister was killed and the chunari was not dyed in her blood, the brother’s wife vowed that she would partake neither grain nor water. Fast unto death! The brother said that the day after tomorrow the groom would arrive with the wedding procession. Who all would he give answers to? To which the wife replied, ‘If a witch runs away before her wedding, what can her brothers possibly do? Not a soul would get to know what happened.’

Helpless, the brother had to agree. At midnight, as the girl lay sleeping, the two cut her head off. After dyeing the chunari in her blood, the wife broke her fast and gorged on choorma to her heart’s content! The brother took his sister’s body two miles away, dug a deep pit and buried it. With an hour of the night left, he came back and quietly went to sleep.

Where the sister was buried, there began to grow a tall and slender kelu tree, which swayed gently in the breeze. As fate would have it, the girl’s jaan procession came down that same road. Suddenly, the groom’s father saw the tall, slender tree swaying in the breeze. He thought how great it would be to tie the toran at the bride’s home! He asked the barber in the procession to go and cut the tree and get it. But what a matter of surprise it was that when the barber bent down to cut the tree and a voice from the ground was heard: ‘Barberji, O Barberji, don’t cut this kelu tree. Sinner is the brother, sinner his wife. Dyed the chunari with the sister’s life!’

The barber fled in fright. Panting, he returned and narrated the tale. The groom’s father said that surely he must have imagined it. He then ordered the dholi to cut the tree. The dholi hurried and bent to cut the tree, when, just as before, he heard: ‘Dholiji, O Dholiji, don’t cut this kelu tree. Sinner is the brother, sinner his wife. Dyed the chunari with the sister’s life!’

The dholi also fled in fright. Then the groom’s younger brother gathered courage and came. He too was just about to cut the tree, when he heard a voice: ‘Devarji, O Devarji, don’t cut this kelu tree. Sinner is the brother, sinner his wife. Dyed the chunari with the sister’s life!’

And the younger brother fled in fright. The groom’s elder brother mocked all of them and said, ‘Go and die in a puddle of water. A five-year-old kid isn’t as scared as you all are.’ Muttering, he headed to the tree. He was just about to cut the tree, when he heard: ‘Jethji, O Jethji, don’t cut this kelu tree. Sinner is the brother, sinner his wife. Dyed the chunari with the sister’s life!’

The older brother also took to his heels. Told his father everything. The father got quite annoyed. He said, ‘You all are just wasting time. Can’t cut a little tree, how will you even sire children?’

He walked towards the tree. He held it with his right hand and was just about to cut it with his axe, when he heard a voice from the roots: ‘Susraji,1 O Susraji, don’t cut this kelu tree. Sinner is the brother, sinner his wife. Dyed the chunari with the sister’s life!’ The father of the groom was scared. But he thought maybe he was imagining things, so he once again got ready to use his axe. Again the same voice called out to him, and this time even he fled! ‘Brothers, it was true! Never seen such a thing, never heard such a thing!’ he huffed.

This time, the groom went himself. As soon as he held the tree, he heard: ‘Husbandji, O Husbandji, you may cut this kelu tree. Sinner is the brother, sinner his wife. Dyed the chunari with the sister’s life!’ The soft stem got hacked in one blow of the axe. But yet another wondrous thing happened — as soon as the tree was chopped off, the earth miraculously parted and from it emerged a beautiful woman, her face veiled!

Then she kept no secrets from her husband. Told him all that had befallen her. Hearing everything, the wedding procession did not even go to the village. They took their wedding feras around the stump of the kelu tree instead of the holy fire! And the jaan took the beendni and returned from there itself...!

The sister of seven brothers had a wonderful life in her marital home. Bathed in milk and gave birth to healthy children! And as for those seven brothers and their wives, they got struck by the plague. Such a death!