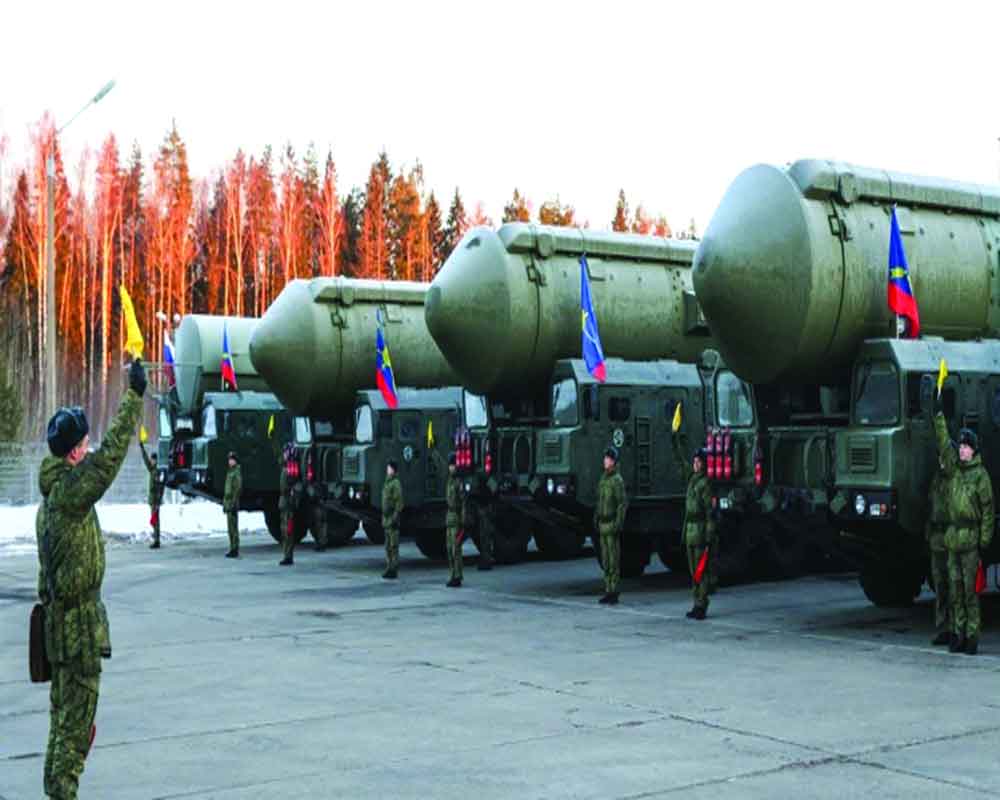 The hopeless Ukrainian situation corroborates the Indian perspective of securing its sovereign and strategic interests, and not falling for the NPT trap

Invaluable lessons have emerged from the Ukraine crisis — one is the validation of India’s age-old apprehension of the Nuclear Non-Proliferation Treaty (NPT). Promoted with the supposed objectives of preventing the misuse of nuclear weapons and fostering complete nuclear disarmament, India despite its avowed pacifist moorings, has historically and consistently opposed the treaty. While wholeheartedly supporting the cause of a nuclear weapon-free world, Delhi never believed that NPT was the formulation to achieve the same. India has maintained that the treaty was structurally discriminatory as it perpetuated the hegemony of the ‘haves’ (exclusive club of pre-1967 ‘nuclear weapon States’ ie, the US, Russia, United Kingdom, France and China), without obligating them to liquidate their own dangerous stockpile. The exclusivity of nuclear deterrence with the so-called ‘non-nuclear weapon States’ (as per NPT definition) by debarring others from acquiring a similar and equal nuclear deterrence with its implied retaliatory or mutually destructive portents, is unfair entitlement.

Not only have the NPT ‘nuclear weapon States’ not destroyed their stockpile, their belligerence and intimidatory expansionism on the ‘have-not’ nations has been disconcerting. From unsubstantiated case of the WMDs (Weapons of Mass Destruction) in Iraq, reneging of Iran N-treaty despite IAEA’s confirmation of full compliances, China’s blatant territorial expansionism, to now Russia’s free run in Ukraine — the privileged five beneficiaries of NPT have hardly demonstrated reassuring and responsible behaviour. Even on Article 1 of the NPT that mandates ‘nuclear weapon States’ to not transfer N-weapons or knowhow, China’s assistance to Pakistani, North Korean and Iranian nuclear programmes is a proven fact that shreds all pretences of NPT suppositions. For India, memories of the 1962 Chinese aggression (followed by Chinese nuclear test in 1964), or the intimidating sailing of the US 7th fleet flotilla in 1971, were staring concerns of regional and strategic threats that warranted hedging its own options, deterrences and asserting its sovereign freedom of action. India demonstrated its N-capability with ‘Smiling Buddha’ in 1974 (albeit calling it ‘peaceful nuclear explosion’).

Nonetheless, this opposition to signing the NPT has put India in an unlikely set of non-signatories (each for different reasons) with Israel, North Korea, Pakistan and South Sudan. However, unlike many NPT signatories and especially of the ‘haves’, India’s responsible behaviour towards non-proliferation speaks for itself. Delhi remained committed to any non-discriminatory treaty that truly entailed fair play and guaranteed security amongst all, without privilege to some. India has a policy of credible minimum deterrence based on ‘no-first-use’ and ‘non-use’ of nuclear weapons against non-nuclear weapon States. Unlike China, Russia or the US, it has undertaken no territorial expansionist endeavours. Despite being routinely chided as an outlier from the prism of NPT, India’s insistence on the proof of the pudding in terms of efficacy or consequential sovereign behaviour has been its compelling case.

In 1991, when Ukraine broke from the USSR construct, it had one-third of the entire Soviet nuclear arsenal and means of production — notionally, third largest nuclear stockpile (1,700 warheads) in the world. It could have practically persisted with its nuclear deterrence status given the inheritance and availability of the wherewithal, but it traded the same for financial compensation and ostensible security assurances from three of the five ‘nuclear weapon States’ as per NPT (Russia, US and United Kingdom) under the Budapest Memorandum. It was a move made in good faith on the word of the ‘haves’. The memorandum had explicitly noted, among many guarantees, “to respect the independence and sovereignty and the existing borders of Ukraine” as also “reaffirm their obligation to refrain from the threat or use of force against the territorial integrity or political independence of Ukraine”. It had further captured “to refrain from economic coercion designed to subordinate” and, above all, “to provide assistance to Ukraine, as a non-nuclear weapon State party to the treaty on the non-proliferation of nuclear weapons, if Ukraine should become a victim of aggression or an object of a threat of aggression”. Today, as Russia unconcernedly violates Ukraine’s territorial integrity, and the US and UK (as principal components of Nato) leave Ukraine high and dry —the assurances of Budapest Memorandum sound so hollow.

Despite the 2014 annexation of Crimea, Ukraine had cavalierly persisted with reaffirming its 1994 decision towards NPT. Calls by odd Ukrainian parliamentarians and security strategists to arm themselves, too, went unheeded. Instead, Vladimir Putin had brazenly invoked N-weapons in defending Crimea, just like he has again dangerously posited the language of nuclear weapons today. In 2019, Secretary of the Ukrainian National Security and Defence Council admitted “nuclear disarmament was a historic mistake” and that “guarantees given to us are not even worth the paper they are written on”. It was a classic case of fatally late realisation.

Ensuing drama of the hopeless Ukrainian situation validates the Indian perspective of securing its sovereign and strategic interests, and not falling for the NPT trap. As Kyiv desperately beseeches Delhi to intervene, memories of Ukraine condemning India’s nuclear re-testing (‘Operation Shakti’) in 1998 is a conveniently forgotten footnote. India has consistently charted its own security considerations beyond the NPT imperatives, which have delivered far more responsible outcomes than those of most NPT signatories.