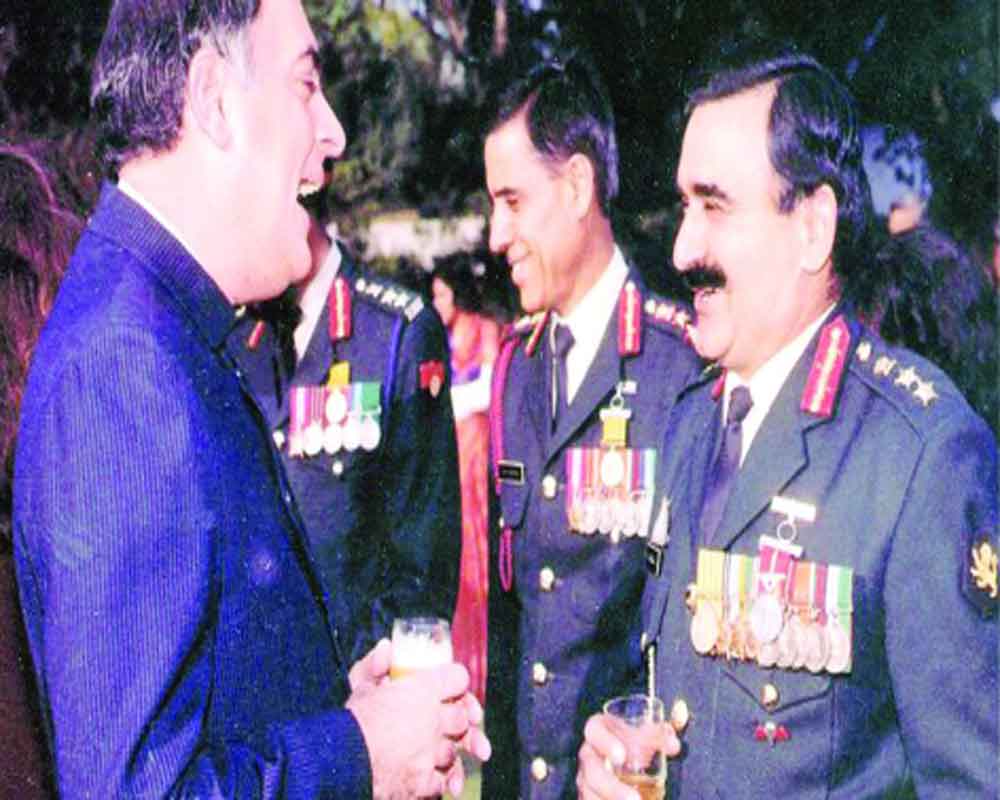 BG Deshmukh’s revelations in his book, A Cabinet Secretary Looks Back, shows how security protocols in the Rajiv era weren’t entirely above board

There is much talk of how Rajiv Gandhi as Prime Minister took his Italian relatives on a holiday to Lakshadweep and compromised national security by misusing the aircraft carrier INS Viraat and other Navy assets and also had naval officers in attendance to cater to the needs of the holiday-makers.

But there is an even greater scandal concerning the wholly illegal involvement of his Italian brother-in-law in the so-called training of the Special Protection Group (SPG) that managed the proximate security of the Prime Minister — a matter which would have certainly compromised the protocols of the special force and exposed it to foreign agencies.

Former Cabinet Secretary BG Deshmukh narrated the story of how the SPG became vulnerable to unknown and unauthorised foreigners in his autobiography, A Cabinet Secretary Looks Back. He said that as Cabinet Secretary, the special force was under his charge and one day in October 1986, he was told by an officer of this force posted in the Prime Minister’s residence that a few of them were going to Italy for “special training.” He immediately checked with Rajiv Gandhi and the latter said this was being arranged by the “Prime Minister’s House.” Deshmukh was not at all happy with this arrangement because the special force was a force that protected the Prime Minister of India, not Rajiv Gandhi, the individual. Therefore, he said the expenses must be borne by the Government. He also told Rajiv Gandhi that the Intelligence Bureau could handle it but later suggested that the Research and Analysis Wing (RAW) be entrusted with the job and the payments be made from the secret funds.

Rajiv Gandhi asked him to speak to Capt Satish Sharma, his close friend. Sharma told Deshmukh that Joshi, Director, RAW, should speak to a certain Italian (whom he named) “and settle the details.” When Deshmukh asked Sharma who this Italian was, the latter “had a hearty laugh” and said Joshi would know. “Joshi ...said, it might have escaped my memory that this person was Rajiv Gandhi’s brother-in-law.” Later, Deshmukh said, Joshi came back to him after a week and said when RAW’s Geneva office asked the Italian to pick up the amount in US dollars, the Italian said Joshi should himself “make arrangements to bring the amount in Italian currency and deliver it in Italy.”

Deshmukh recounted what happened next: “Joshi was not at all happy with this as it would entail carrying about a quarter of a million dollars in Italian currency in a big suitcase, which was sure to invite trouble.” The Cabinet Secretary told Rajiv Gandhi that the arrangement was not acceptable, “specially because the amount was so large. He (Rajiv Gandhi) flushed and told me to forget the whole affair.” Later, Deshmukh learnt that officers did not go to Italy but an Italian expert came to India — “of course, he became rather unpopular with the SPG for he would throw his weight around.” Deshmukh also realised that thereafter instructions had gone out to keep him out of the loop on all such “sensitive (read family) matters!”

Deshmukh concluded his narration of this shocking incident by saying that “in the Mughal-darbar-like functioning of the Gandhis, he had committed the cardinal sin of checking with the king himself, the message he conveyed to me through his aides.”

The senior civil servant said he became aware of the fact that the Prime Minister’s House had access to funds from abroad when the question of hiring Rajiv Gandhi’s Italian relative to “train” the SPG came up. There were two sources for these funds — money stashed away by the family in foreign banks consequent to garnering commissions on foreign deals and the other being the secret funds of the Government of India. The secret funds are deployed for such purposes because they are not subject to inquisitive probes by the Comptroller and Auditor-General of India.

Hailing as he did from Maharashtra, Deshmukh was aware of how the Congress collected funds in the state. In the initial years of her prime ministership, Indira Gandhi depended heavily on Maharashtrian leaders like Rajni Patil and Vasantrao Naik. Later, when she gained complete control of the party and the Government, she decided that it was far better to collect funds for the party by “claiming cuts from foreign deals.”

Consequently, trusted officers were posted in key Ministries like defence production. Also, Deshmukh said the practice of taking kickbacks earned India notoriety in foreign countries. So much so that when India decided to buy submarines from West Germany, the German Defence Ministry told the supplier the amount of commission that it would have to pay. The general talk in international circles was that in Latin American and African countries, the commission was above 10 per cent. India was placed in the five to 10 per cent bracket.

So, the scandal about commission payments by Bofors was no surprise. Deshmukh said that although he did not believe Rajiv Gandhi took the money, he said there was strong circumstantial evidence that he (Rajiv Gandhi) knew the names of the recipients but was reluctant to expose them. One could only surmise that the beneficiaries could be the Congress “or a close relative or friend of the Prime Minister’s family”, Deshmukh concluded. Indeed, he says a lot here without taking names. It appears, the dramatis personae of L’Affaire SPG were once again the same! For the sake of our Prime Minister’s security, all this needs to be probed.