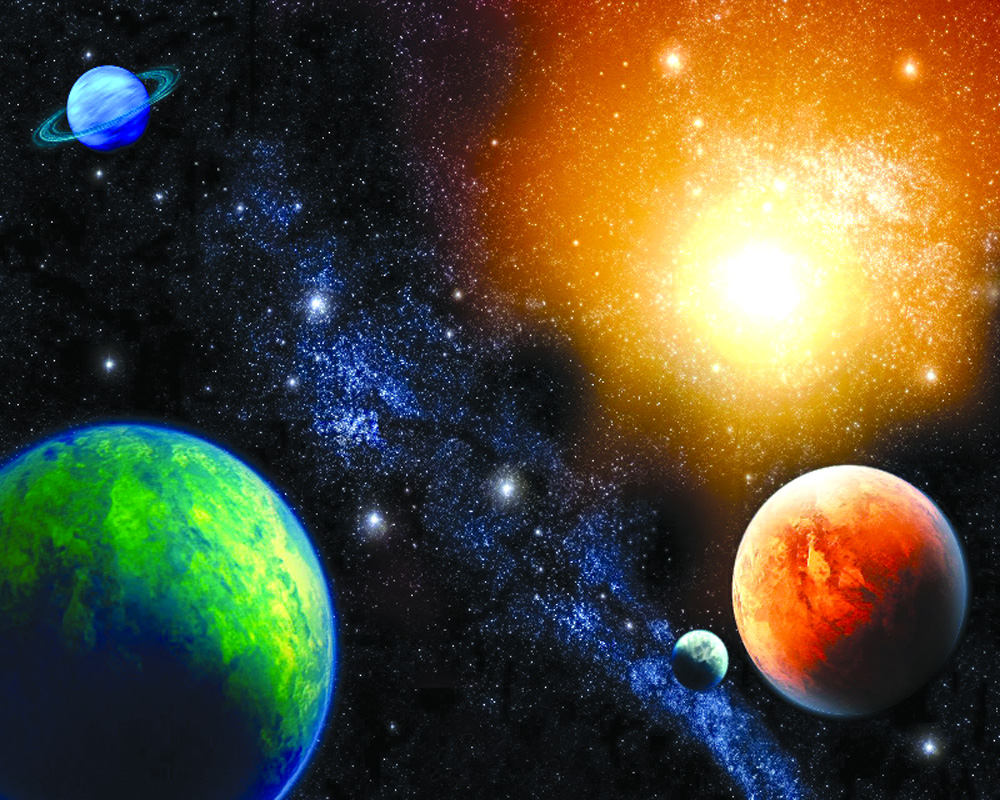 Universe is said to be comprised of 14 lokas, where each loka represents a particular range of consciousness, call it perceived reality, writes Hingori

The 14-storey building of the Milky Way can also be called the ‘lokas’. Each loka represents or reflects a particular range of consciousness, call it perceived reality.

The 7 upper lokas are domains of light extending from the spine to the crown of the head, then from Earth to Sun, Sun to the North Star or Dhruv Tara and from there beyond. The lower lokas are called talas — domains of limited light or partial darkness.

Gurudev once showed me, during a state of dhyaan, a crimson fire burning inside me at and around my navel, resembling that of a yagya. The fire I saw could possibly be the sun illuminating from my spine to head with the subtle aura of light.

The Puranas describe these lokas to be pairs starting from both the head as well as the centre of the body in the microcosm, differentiated by the subtleness of consciousness.

Let us step down from the seventh floor of the 14-storey building of this universe and see what the lower lokas or talas have to offer.

The Sixth Floor, ‘Atala’, of this 14-storeyed building — the universe, lies just below Earth. A world of lesser qualifications than ours, it takes one deeper into delusion and ignorance. Fear and lust are governing emotions. It is a corrective world like all the lower planes and only those who overcome these inferior emotions to develop self-confidence, self-discipline, self-control can be reborn on Earth. The average guna mix here, has a predominance of rajas.

Those who have qualities of nobility and style are perfect inmates of Atala. Intellectuals with selfish attitudes, senior ‘I, me and myself’ corporate executives, shrewd businessmen, people clever but not wise, corrupt doctors earning commissions by making patient’s bear unnecessary expenses. People with extra marital affairs, those indulging in sexual fantasising, make a good fit here, depending on the intensity of their rajasic qualities combined with tamasic and a fair amount of sattvik ones too.

Vitalaloka is the 5th floor and the second level of lower lokas. The Guna mix, I conjecture, is about 20% Sattva, 40% Rajas and 40% Tamas. The ignorance levels are higher. Warriors, awarded marines, scientists all with negative ambitions and qualities, dishonest businessman, politically minded corporate executives, self-centred beings, violent people both physically and mentally; in short, people with lower self-opinions belong here.

Depending on guna mix, this could include people with riches on earth, great social standing, well educated with maybe degrees from even Harvard or Stanford. People who do charity for social status, priests who are corrupt, government officers who insist on bribes get visas to these lower lokas very easily.

These lokas are not ugly places, but just darker in light, in concept and in consciousness.

Lokas like Sutala or Vitala also contain residents who may be pious and dogmatic including mean religious leaders, yogis, priests, sportsman and women celebrities, presidents and chieftains with one common factor — lower self-opinions and perceived negative samskars. The Guilty!

People in lokas at the level of Sutala though ignorant, more sense attracted, more tamasic still have the desire for hopping on to the ladders and working towards self-improvement. They self-reflect on being demonic and less positive. They believe that they have a lot to do to reverse their descent.

Talatala the 4th Floor or Mahatala the 3rd floor are not necessarily uncomfortable but darkness prevails in greater measure. Pseudo agnostics, self-realised sinners, terrorists, Tinker, Tailor, soldier, sailor can all qualify in a manner of speaking.

After self-corrections and improvement in their guna mix they can get a chance to take rebirth on Earth as a corrective opportunity but lead a life of suffering, ill health, financial problems, social dissatisfaction in an almost ‘Why me’ existence to clear out their karmic debt. It is a slow progress involving multiple births to climb the ladder to higher lokas.

Rasatala and Patala, the 2nd and 1st floors respectively, are the lowest lokas of existence. Tamas of the negative kind is the dominating Guna. With delusion and ignorance at peak, self-reflection is not a concept in this loka. Dissatisfaction and misery abound. People believe that a wretched existence is all there is to expect.

Liberation is a far cry and both behaviour and perception are animalistic. Qualities of refinement hardly exist. Living in the pits is not a pun, it’s literal. It’s like living in the shadows with the power off. The Plugins are hatred, jealousy, supreme guilt, envy, sorrow, basest emotions, worst attitudes and demonic nature. Great conquerors like Hitler, Napoleon, terrorists who murder freely, professional killers are allotted these realms.

There are two points to ponder:

It is believed that it is only when you have suffered enough and built a resolve to change, that you get an opportunity for rebirth on the BhuLoka or Earth. This is supposed to be true for most of the lokas and for movement from one to the other, either upwards or downwards.

That is why people of this plane of existence reflect the gunas of various different lokas. The conditioning and qualifications show and form the trends of their thinking. However as this is the Karma loka, there is opportunity to go against your nature and qualify for the better. Divine beings from higher lokas, take birth to serve their lower loka entities. They manipulate a change in their gunas through example setting, motivation, counselling and sharing their gyan.

In our next article, let’s talk about what lies above!